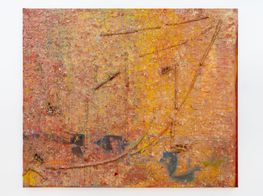 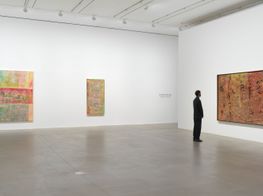 Few artists get the opportunity to exhibit at two of Hauser & Wirth's locations simultaneously.

Over 50 years of Guyana-born Frank Bowling's paintings are included in an exhibition across Hauser & Wirth's galleries in London and New York (London, 21 May–31 July; New York, 5 May–30 July 2021).

This major exhibition, Frank Bowling London / New York, follows the artist's recent survey at London's Tate Britain in 2019, tracing his remarkable postcolonial investigations into painting, traversing both figuration and abstraction to develop his own sumptuous and unique iconography.

Born in Guyana in 1934, Bowling graduated from the Royal College of Art in 1962, studying alongside pop icons David Hockney and Patrick Caulfield. Departing from the consumerist iconography occupying his peers, Bowling—who was also an avid art critic at the time—moved to New York at the peak of the Civil Rights Movement in 1966, ingratiating himself with the Black Arts Movement.

In New York, the artist developed one of his most important series, known as his 'Map Paintings'. Here, traced cartographic stencils of the Southern hemisphere appear swathed in riotous colour, emerging and glowing. Shaped by geopolitics and displacement, the works indicate Bowling's rejection of Western-centric thinking.

A prime example, Texas Louise (1971), on display in Hauser and Wirth's exhibition, was a standout piece in the acclaimed travelling exhibition Soul of a Nation: Art in the Age of Black Power.

By the 1980s, Bowling was back in London, honing his now-iconic language of process-based abstraction, often working with raw, unprimed canvas laid out on the floor, incorporating a myriad of found objects directly into the paintings. As Bowling has explained, 'I was trying to invent ways of using the traditional methods of applying paint—spilling, dripping, marking, measuring.'

Sublime abstractions such as Piano to Guyana (2004) have been described by Zoé Whitley, Director of London's Chisenhale Gallery, as 'alternatively alchemical and cataclysmic, experimental and rigorous. Profoundly confounding the rules of art historical engagement'.

Collectors are only just beginning to catch up with Bowling, whose works seldom reach the secondary market.

If The Guardian's Jonathan Jones's speculation that Bowling is a master in the lineage of Turner, Rothko, and Pollock is correct, there is much further catching up to do.

Now aged 87, the artist remains active, working almost every day. Describing his intuitive approach to making, in a recent interview with Matthew Collings for The Evening Standard, the artist remarked, 'Paint takes over and does things.

It can internalise this spiritual jumping about, where people are continually dodging away from disaster, coming into contact with each other, backing up and dancing away.' In 2020, Bowling was knighted by the Queen of England for his services to art—one of few black artists to receive this royal commendation. 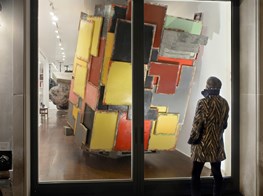