In the Studio With Miko Veldkamp 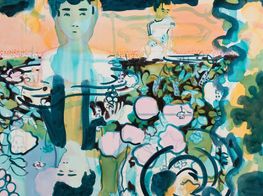 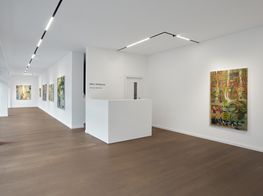 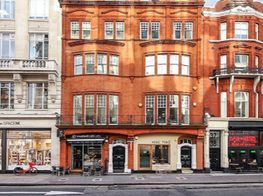 Colours move like liquid across Miko Veldkamp's canvases, confusing the boundaries between inside and outside; natural and urban environments. Through his latest paintings, now on view at Workplace in London, the New York-based Dutch-Indonesian artist navigates his experience living across geographies, blending recollections into ambiguous painterly narratives. Veldkamp talks us through his process and key source materials.

The title of your new exhibition at is Ghost Stories. I wondered how you arrived at that phrase and how it encapsulates some of the themes in your latest paintings?

Originally I started thinking about the 'ghost stories' I heard when I was younger, particularly growing up in Suriname in the countryside. Stories about ghosts as shape shifting, boundary-crossing creatures.

They represented boundaries between man and nature and between spiritual and tangible worlds. I saw them as a metaphor in my work, and for my own kind of shifting identity and how, having lived in different places, my identity shifted as the environment changed.

Sometimes these environments overlap and collide. I wondered if you could speak about some of these spaces you try to explore?

Yeah, totally. Over 90 percent of Suriname's surface area is covered by forest, so it's really not urbanised. Whereas Manhattan, where I live now, is one of the most urbanised places there is, so I think those contexts collide in my work.

The nightclub recurs as a metaphor for exclusive spaces, such as nation states or other cultures and languages. They're also a place where identities are performed, which is no different from other contexts.

A lot of the time, I don't know what kind of space I'm going to paint, but I start putting up some abstract shapes, thinking about how different spaces relate to each other through these psychological metaphors.

You also see a lot of reflections, shadows, or spaces divided by glass or submerged in some way. These are psychological readings of space, and even though psychology is seen as something introspective, it also reflects the surrounding world.

We are formed by the world we live in, and in my work, the internal and external are always sort of complicated or unstable.

I understand that you have an almost daily process of 'journalling', which includes writing and making small sketches. I wondered how you go from taking the seeds of an idea and transforming them into a complete painting?

Yes, journalling is very important to me. I think about painting all day, every day, so journalling is a way of recalling the fleeting ideas and observations that I have throughout the day and don't want to lose.

However, when I start a painting, I like not having a specific idea of what I am going to do. It might just be a case of thinking, 'I want to make a large, narrative painting', or, 'I want to make a small, really abstract and quiet scene.'

It's more about depicting atmospheric ideas that I might have. I like allowing the painting to speak back to me, so that it becomes a dialogue.

A work in progress can remind me of certain things from my own life or from art history, so I go from there. It's a dialogue between the material, art history, and my own life.

So in a way, journalling is a separate process and when you're actually painting, it's something more subconscious that's coming through? It's not a case of taking something from the page to the canvas.

Yeah exactly, not at all. The things you see on the canvas are really what I remembered while I was painting, and there's also overnight thinking sometimes. Sometimes it's all in the moment. I feel like the act of painting grabs memories out of me.

There is a layered, translucent look to your paintings, and I wondered how you achieve that effect?

There's a lot of glazing in my work, where I add a translucent layer of paint over another already dried layer of paint. I used to paint more quickly, and a lot of paintings were done in one session.

Once I realised that it was momentum or flow that I was interested in, I realised you don't need just one kind of flow or momentum. So I started glazing, which I really like because it slows me down.

Every layer needs to dry before the next is added. It could take a couple of hours, or it could take a day. The slowness of the process also affected how I approach narratives, which could come about more slowly.

I'm also interested in translucency as a way of seeing. In a sense, once I have the idea, everything becomes about translucency.

We are always in an atmosphere that is translucent. If you look through trees or foliage, there's a sort of translucency, or a shadow could be considered as a kind of translucent film. When I started looking at things in that way, it became very harmonious in my work and in real life, too.

The bicycle reappears as a motif throughout your work. I wondered what it symbolises and why it's important to you to include these?

I guess it has to do with when I moved to the United States and how people sort of projected Dutch stereotypes on me, or saw me as very Dutch, which I thought was really interesting. It meant people in the States saw me as more Dutch than people did in the Netherlands.

At the same time, I kind of felt less Dutch, because I'd moved away. There are these internal and external flips. I think that's comical and funny, so European or Dutch stereotypes often appear in my work as a nod to that.

My Europeanness is very much in my work, and I only realised that moving to the States. I've started using more references to the European canon and Dutch Golden Age canon, including bikes, which is important because my Europeanness and Dutchness is up for debate. That's something I enjoy playing with.

I understand that the works are kind of self-portraits. Is that the case?

I don't always know who the figure is going to be, actually. I start with its position or movement or relation to other figures I've painted, and then it's easy to go towards the image of myself, because I know what I look like.

I think that also refers to ancestry, and how the way you look matters to how your heritage is represented. I have a couple of recurring versions of me, but it develops quite organically.

The figure with tan lines that reoccurs has become a kind of metaphor for being biracial, but as a metaphor a reversed tan line also works. It's about presenting white but having a different history.

What I like about the reverse tan line figure is that you also think about what you would need to wear to get that tan line, which makes it kind of kinky and comical and puts you on the wrong foot again. —[O]