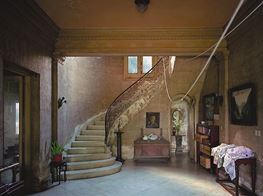 In 2017, artist Robert Polidori captured the beguiling Roman wall paintings at the Villa dei Misteri (Villa of the Mysteries), one of the most famous and controversial sites in Pompeii.

Recently intricately restored, the whole area was buried in the epic eruption at Mount Vesuvius in 79 AD, remaining under metres of volcanic material and ash for almost 2,000 years, until poorly excavated from 1909 onwards.

One of the most acclaimed colour photographers of his generation, Polidori has spent over 30 years capturing large-scale images depicting some of the most fascinating human interventions on earth.

His third exhibition with New York's Kasmin (22 April–15 May 2021) focuses on the Roman city of Pompeii and continues his investigations into important sites of religious imagery.

Largely thought to be read as a linear, narrative story, the tableaux depicted in works such as Villa dei Misteri #1, Pompeii, Italia (2017) is thought to depict the initiation of a woman into a cult devoted to Bacchus, the god of nature, fertility, and wine.

For the first time, Polidori captures the mysterious scene with vivid contrast and saturation, only possible with his signature large-format camera—requiring long exposures of up to five minutes in natural light.

The scene features an array of charged iconography; including flagellation, phalluses, a bride, and the god Dionysus. Beyond decoration, the room has been suggested to be an active place for rights of passage, evidencing the powerful cultural longevity for humans' relationship with figurative art.

Describing his spiritual connection to photography, Polidori once said, 'I think of myself as performing some sort of photographic rite of Extreme Unction by commemorating the life trajectories of habitats that were permanently interrupted by cataclysm.'

Last year, Polidori received the prestigious Guggenheim Fellowship for those who have demonstrated exceptional creative ability in the arts. This series, shown for the first time in North America, follows a major solo exhibition at The J. Paul Getty Museum in 2017, featuring many of the artist's compelling contributions to photojournalism.—[O] 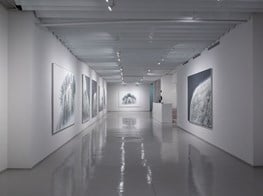