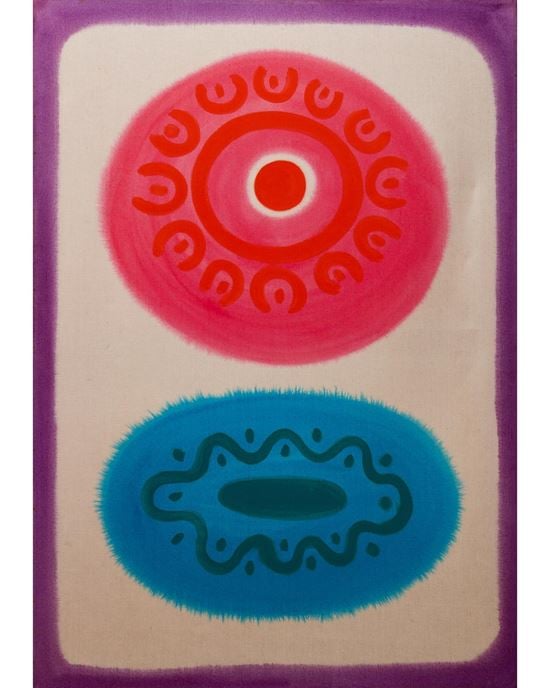 Led by Zoe Whitley (Director of Chisendale Gallery), Prafulla Mohanti features in Possessions: Spirituality and the Art of our Time, Frieze's new curated section focusing on the theme of spirituality in contemporary art.

After graduating as an architect in Bombay, Mohanti moved to the U.K. in 1960 working as an architect-town planner in London. Now devoting himself to painting and writing, Mohanti's mixed media works—inspired by Indian traditional theories of cosmogony—feature concentric circles in vivid colours.

Reflecting on old village life and his move to the U.K., Mohanti notes 'Actually, I have never left the village, either physically or emotionally or spiritually because for me the two worlds are not really separate, they are one. Wherever I go, I carry my village inside of me'. 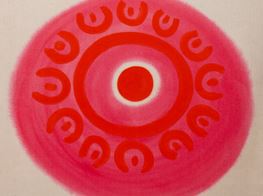 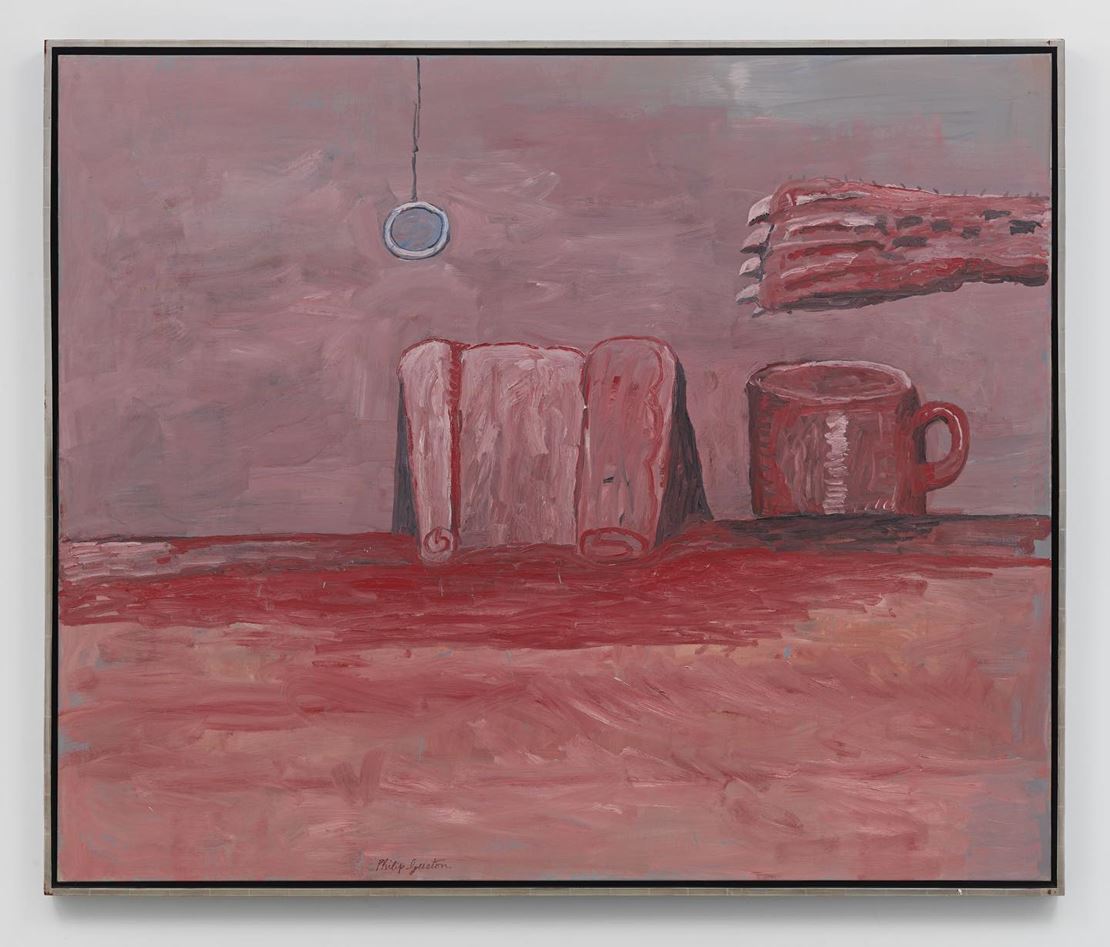 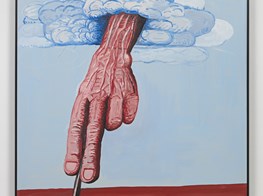 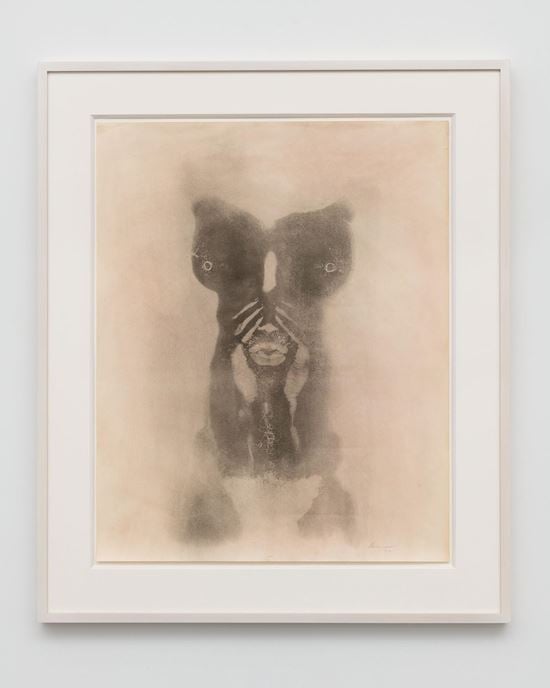 Untitled (Body Print) is part of Hammons' earliest and most renowned Body Print series. Coating bodies—usually his own—with grease or margarine, Hammons would press these body parts against a sheet of paper. Black pigment would subsequently be dusted onto the work leaving behind a figure detailed with skin, hair, and clothing.

On the process, Hammons notes, 'I have to carefully decide how to get up after I have made the impression that I want. Sometimes I lie there for perhaps three minutes or even longer just figuring out how I can get off the paper without smudging the image that I'm trying to print'. 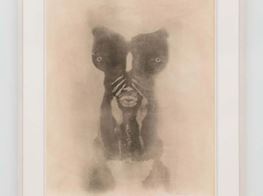 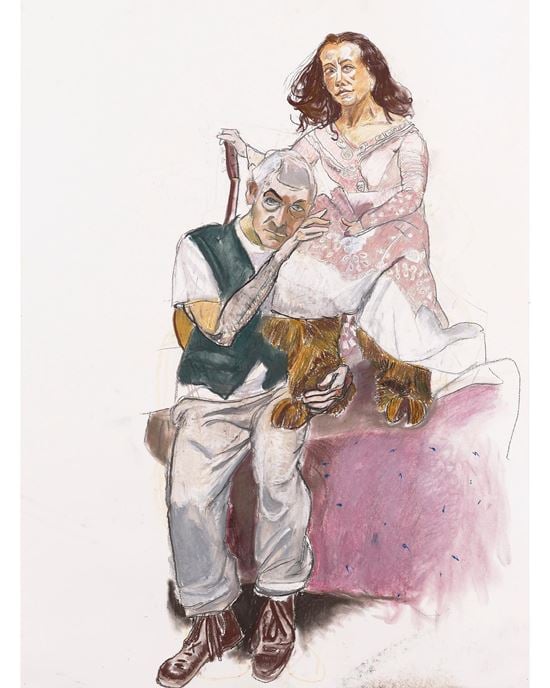 Paula Rego is now represented by Victoria Miro Gallery and this is one of three pastel on paper works from their Frieze Art Fair 2020 online viewing room.

Rego is rightly considered the grand dame of figurative painting in her native Portugal, as well as the U.K., where she has lived for much of her life after studying at the Slade School of Fine Art in the 1950s.

Rego exhibited with The London Group in the 1960s, alongside David Hockney and Frank Auerbach but it was in the 1980s that she received more notable institutional support with solo exhibitions at the Gulbenkian Foundation and the Serpentine Gallery. Later, Rego was to become the subject of comprehensive survey shows at Tate Britain and the Reina Sofia.

Typically for Rego, this work incorporates fantasy or folklore into an intimate domestic scene depicted through a distinctly feminist lens.

She has described her method of using pastels as 'like painting with your fingers'. Soft, smooth tones combine with her confidently drawn line to define the form and expression of her figures.

Her hand has become looser and more economical with large parts of paper left untouched, although her figures enchant us with their melancholic gaze and the psychological complexity of their relationship. Rego's male figure seems angry and vulnerable, whilst he clings onto the 'divine lady', who confidently looks out towards us whilst propped up above him leaning on her guitar.

Numerous foreboding narratives threaten the scene, but Rego never forces them on the view, allowing us space for our own reflection. 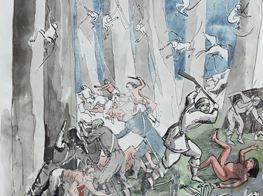 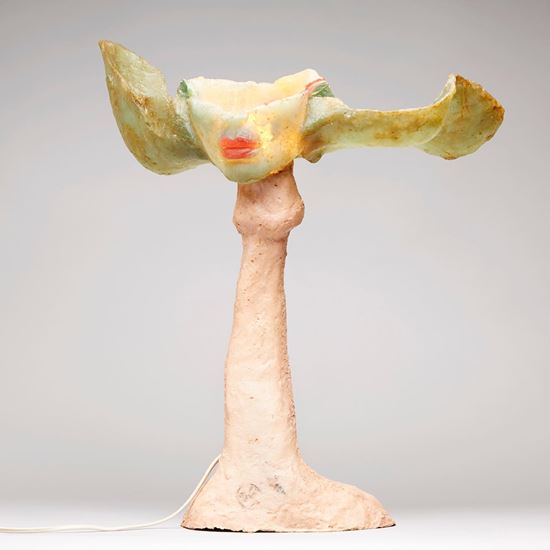 This gem of a sculpture shown at Frieze Art Fair 2020 with Richard Saltoun online.

Imprisoned for over ten months in concentration camps during the Second World War as a Polish Jew, Szapocnikow's work functions as a record of both her memory as well as a commentary on the female form. Best known for her resin casts of body parts, her sculptures explore a black humour rooted in the fragility and sexualisation of the female body.

The death of Stalin in 1953 saw the Polish government loosening control over creative freedom and prompted Szapocznikow's move to figurative abstraction.

Lamp Double Mouth on Phallus (1967) is part of her sculptures produced in the 1960s that employ bright polyester resins and the forms of lips and breasts. With light bulbs concealed within, these works take the form of functional desk lamps, adding to the artist's commentary on consumer culture and modular reproduction. 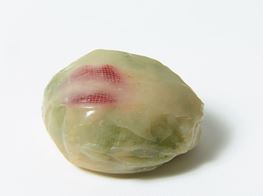 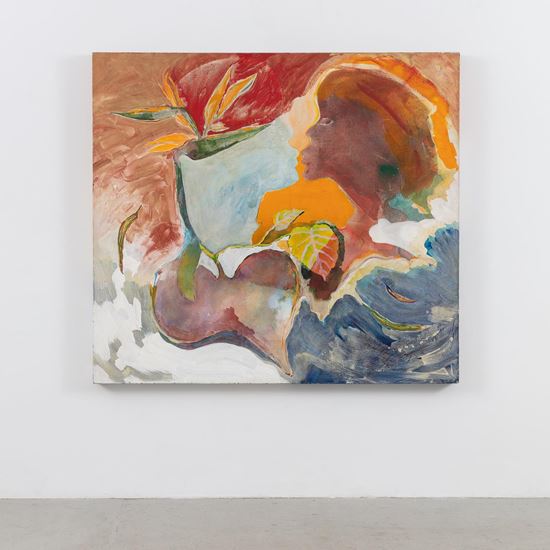 In the late 1960s, Suzanne Jackson studied art and ballet at San Francisco State University, before touring internationally with a modern dance company and eventually settling in Los Angeles.

There, she met and studied under the influential African-American artist, Charles White, who encouraged her to set up and run Gallery 32, which endorsed the use of art as a vehicle for social activism and also gave early shows to David Hammons and Betye Saar.

For the last 28 years, Jackson has lived in Georgia, teaching at Savannah College of Art and working in her studio. The Jepson Center, Telfair Museums in Savannah honoured her with a comprehensive survey last year.

This figurative painting from the 1980s is one of our highlights from Frieze Art Fair's 2020 online viewing rooms, showing with Ortuzar Projects who held a solo show of Jackson's work at their New York space last year.

A dream landscape depicting the profiles of two faces that are tantalisingly close to kissing is rendered in layers of washed acrylic, revealing a multitude of colours that brim to the surface, whilst others fade away.

Jackson is an alchemist with colour; natural hues swirl together with richer blues and purples, imbuing the canvas with a translucent depth that is beautifully counterbalanced by solid areas of vibrant orange heat and deep red.

Jackson's silhouettes recall mystical paintings or hieroglyphic inscriptions, but the lips are curvier and the tones richer. The couple are bound together by a heart-shaped motif echoed by the bird-of-paradise plant root. Jackson's playful and poetic imagination transports us to her own alluring Eden. 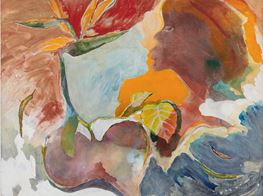 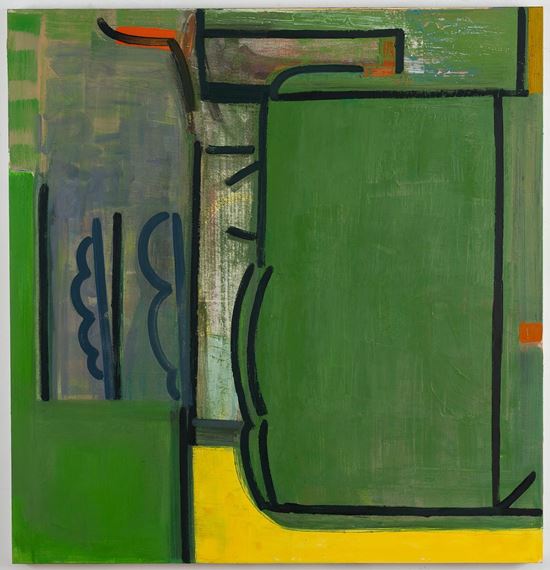 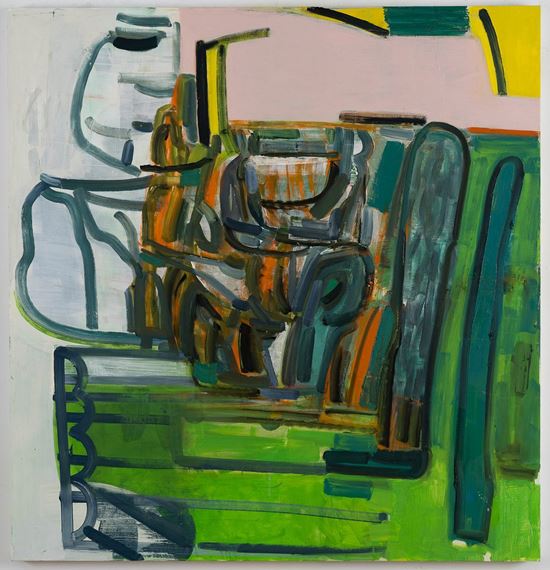 Gladstone Gallery are exhibiting new paintings and drawings by Amy Sillman across two of their spaces in New York.

In lieu of a conventional press release, Sillman addresses gallery visitors with a poignant letter examining the effect of Covid-19 and the current political climate in America on her work as an artist, and how this changed the course of her practice in the months leading up to these exhibitions.

In doing so she reveals, 'eventually it was the process of improvisation itself that seemed the most timely and urgent. I was thinking about a quote by Fred Moten, "improvisation is making nothing out of something". In this sense "nothing" is a good thing, it means you're in a hole, on the brink of change, and you have to listen, to pay attention. Improvising is a process that comes from within and that proposes a without, a nowhere that is everywhere. The hard questions continue (how to keep making paintings at all, if the world can possibly be rebuilt, and how) but I hope there's an alchemy in there, a use, in keeping on working with the motion between the known and an abstract (but felt) unknown'. 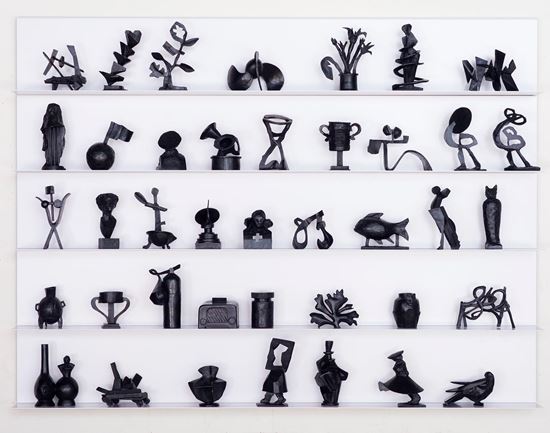 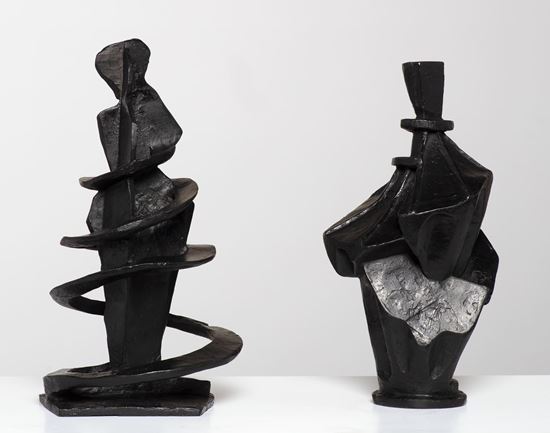 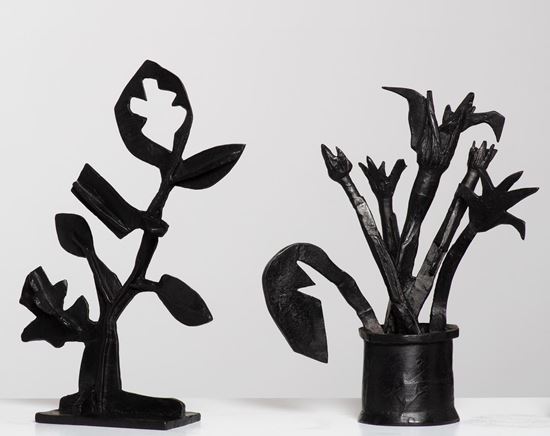 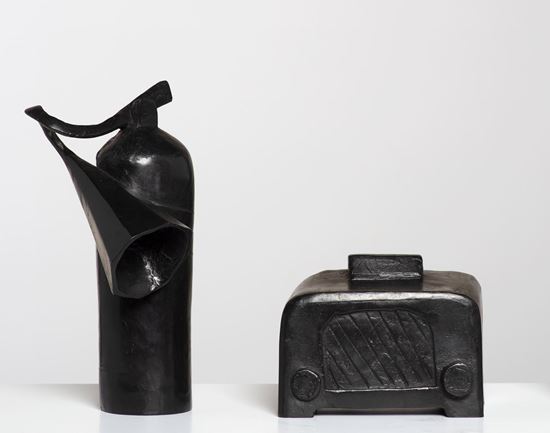 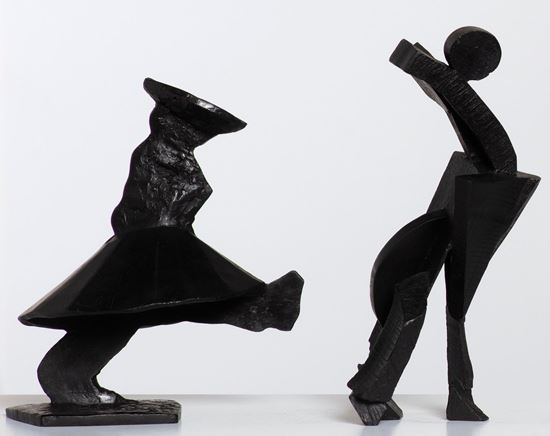 Goodman Gallery recently launched an online video programme of William Kentridge's films on their website, whilst concurrently showing this set of sculptures for their online viewing room with Frieze Art Fair 2020.

As a member of the South African Resistance Art movement in the 1980s, Kentridge's practice has since been grounded in the struggles and emotions of post-apartheid South Africa. In 1999, an exhibition of Kentridge's work went on view at London's Serpentine Gallery, and he has since had countless solo exhibitions worldwide.

Cursive comprises 40 bronze sculptures, or 'glyphs', many of which have been used across Kentridge's previous projects. With each glyph representing a different symbol, the sculptures can be rearranged as one wishes, allowing a multitude of memories and influences of different cultures and periods to interact. 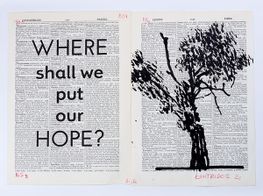 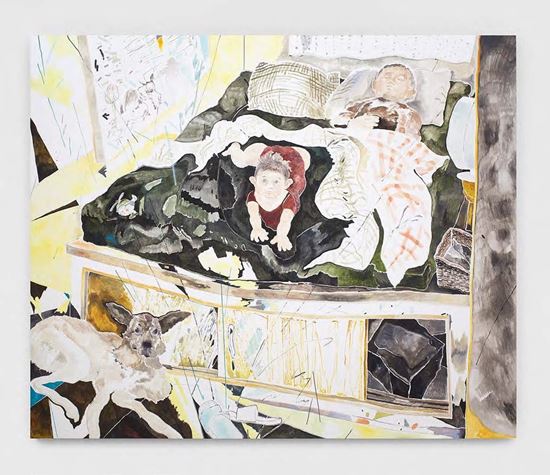 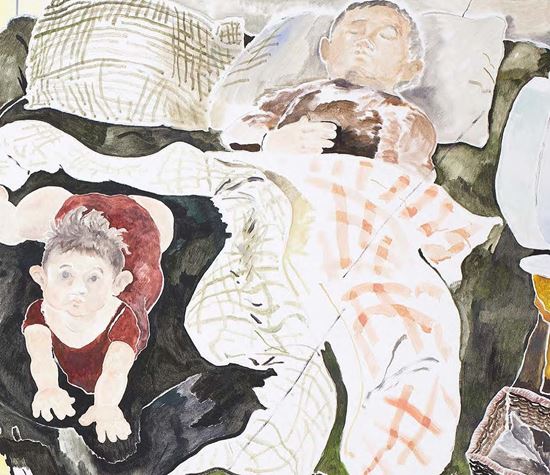 Through his use of diluted oil paints, Huen creates scenes with varying degrees of precision and colour, while his continuous brushstrokes reflect the smoothness of the calligraphic line.

Vibrant and chaotic, yet cohesive and organised, Huen's scenes align with his interest in the 'specious present', a theory first put forward by E.R. Clay to describe the present as being a cumulative experience of many moments. 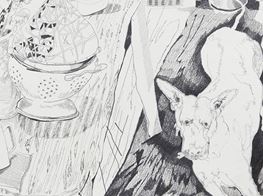 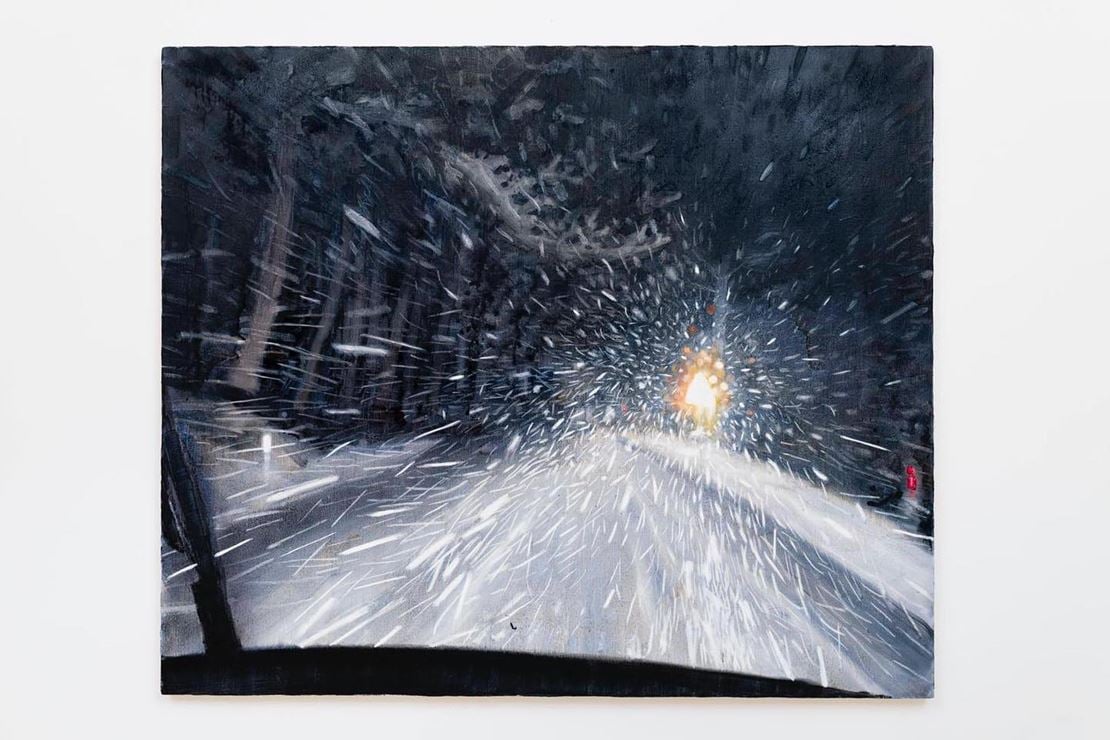 A group exhibition titled After Image and curated by Robert Spragg, was presented at Mamoth in London (26 September–28 November 2020).

The show takes as its starting point the writer David Joselit's text on how painting can theorise the circulation of commoditised images, presenting us with a group of young U.K.-based conceptual painters working in this mould.

This is one of two similar Joseph Yaeger paintings in watercolour on primed canvas included in the show. Yaeger uses his own photographs, together with films stills, news media, and sourced images as triggers for his works. These images are then transformed through their displacement and the act of painting.

Memory clearly plays a role in Yaeger's watercolours as we are provided with a fleeting glimpse of a moment in time but cracks in the paint or visible underpainting often reveals, in his own words, 'time moving through the image'. 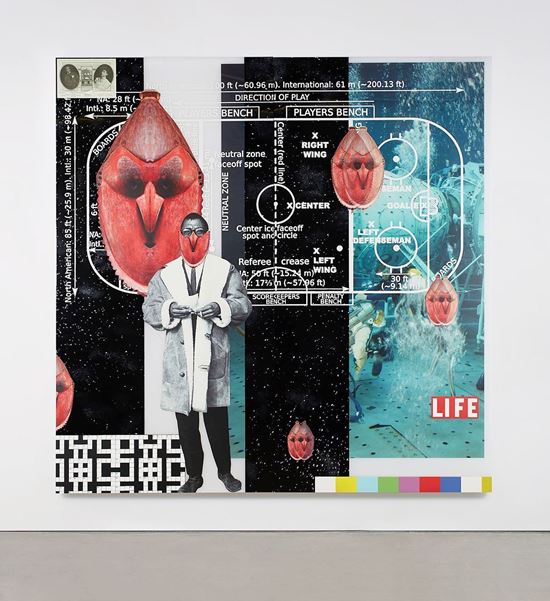 Cutting through art, politics, and science, Bahamian artist Tavares Strachan's practice reintroduces marginalised objects and peoples into the cultural canon, inspiring a curiosity of the world in the process.

The Encyclopedia of Invisibility (2018–ongoing) is an ongoing project that weaves through the artist's initiatives, containing over 15,000 entries—from B-movies to mythological creatures and historical figures. It is the backbone to his current exhibition at Marian Goodman Gallery, In Plain Sight (8 September–24 October 2020), an immersive presentation of sculptures, explosive paintings, and other elements that bring figures swept from collective memory to the fore.

In Before the Fire (2020), a labyrinth of references includes a photograph of American novelist, poet, and activist James Baldwin taken in 1963—the year his non-fiction work The Fire Next Time was published—in the foreground. 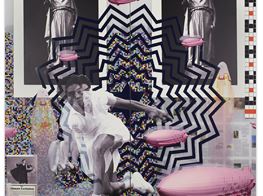