LogoutLogin
My OculaSign Up
Vojtěch Kovařík at Mendes Wood DM

Vojtěch Kovařík featured in their exhibition at Villa Era in Italy that opened on 26 September 2020. His paintings are figurative and monumental; using spray paint techniques, he creates a patina akin to the stone surface of sculptures.

Although hugely influenced by artists such as Baselitz, Lupertz, and Picasso—Kovařík also cites his father's readings of Greek myths from a book by Eduard Petiska as a huge influence to him.

Soviet Brutalist sculpture and murals also permeate his imagery, imbuing them with melancholy and rooting them to his native Czech Republic. 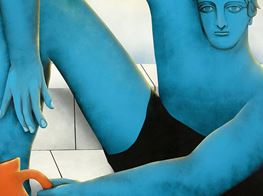