Known as the father of Spatialism, Argentine-Italian artist Fontana worked with a variety of materials and techniques to experiment and pioneer conceptual limits in art.

The Movimento Spaziale was the result of the 'Manifesto Blanco', a manifesto written by the students and teachers at the Academia Altarmira, which Fontana founded in 1945. The manifesto called for art that combined elements of colour, movement, time, and space.

This work is part of Fontana's 'Concetto Spaziale' series. The linen was stretched and painted in monochromatic colours, to which Fontana would stab to create buchi (holes), exposing the space beneath. In creating this void, Fontana investigated and manipulated the space between the viewer, the canvas, and the space beyond.

The painting is significant for marking the beginning of Fontana's distinctive 'Tagli' (cuts) series. Tagli being the process of vertical or diagonal energetic slashes made to the canvas made with a sharp blade. Earlier Tagli work can be delineated for their rougher, more ragged tears, whereas later works were characterised by definitive slashes. 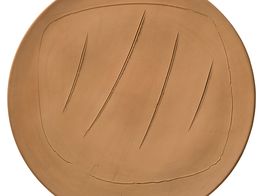