LogoutLogin
My OculaSign Up
Charline von Heyl at Corbett vs. Dempsey
Chicago, 20 February 2021 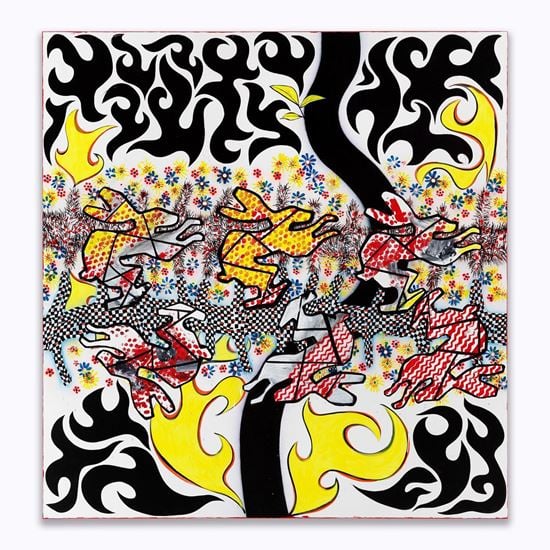 If anyone can be attributed with keeping painting progressive and shifting its parameters—without resorting to the re-hashing of past tropes—it must surely be Charline von Heyl.

This incredible recent painting, showing at Corbett vs. Dempsey until 13 March, perfectly encapsulates her relentless desire to create startlingly unique images through the medium of paint.

Her use of jarring colours and motifs interplay with a crisp flatness that jolts us into clutching at why we feel a certain sensation from absorbing these enigmatic compositions.

A unique visionary within the realm of contemporary image making. 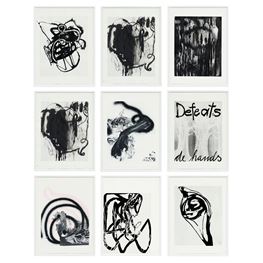 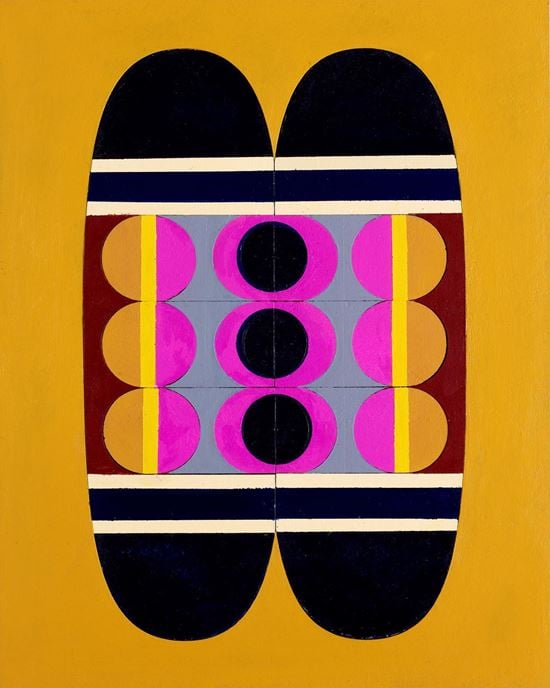 'There is an undeniable dynamism in the charged currents of movements, fusions, and disjunctions that are contained within Chowdhary's formal arrangements, wherein a restrained minimalism is offset by the weight of matter, the fluidity of memory, and above all, an enigmatic use of colour.' 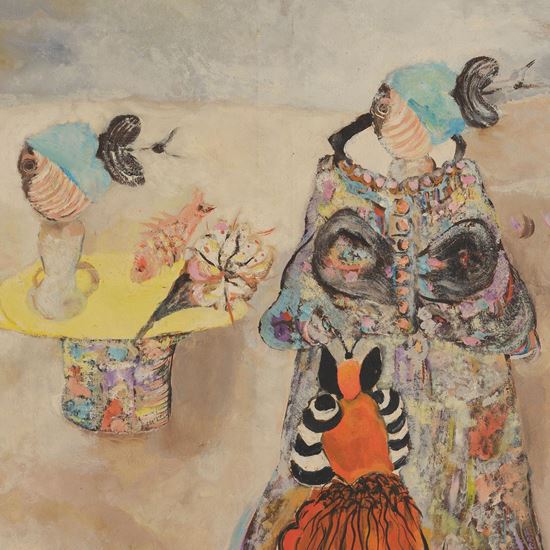 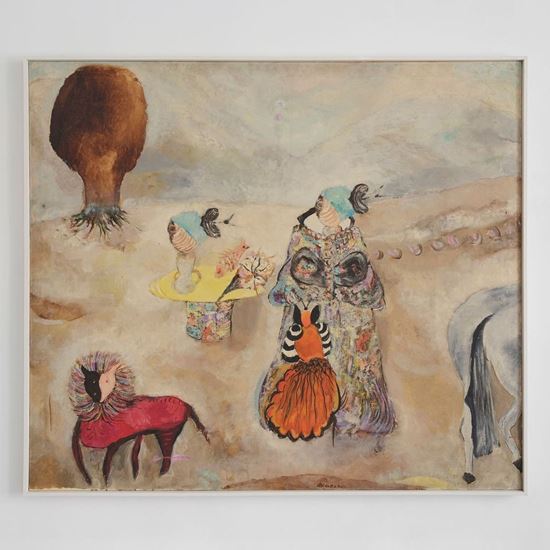 The paintings of late Macedonian artist Ljiljana Blazevska are a stunning new discovery for us, thanks to the painter's beautiful exhibition at 15 Orient in Brooklyn, running until 14 March.

This fantastical scene is unashamedly painterly and gorgeously rendered in vivid colours. Deliciously unexpected treats for the eyes emerge all across the canvas. 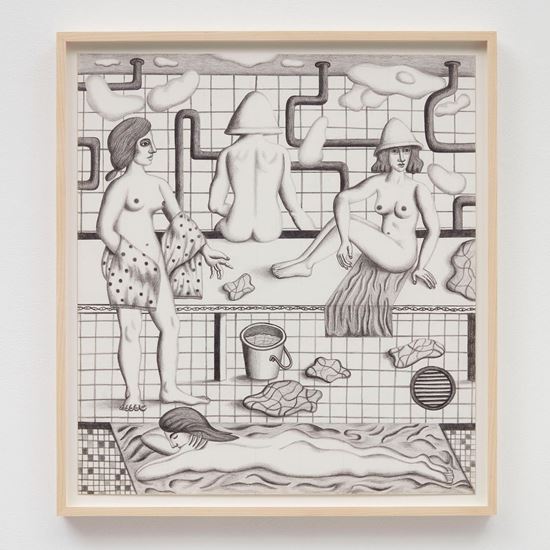 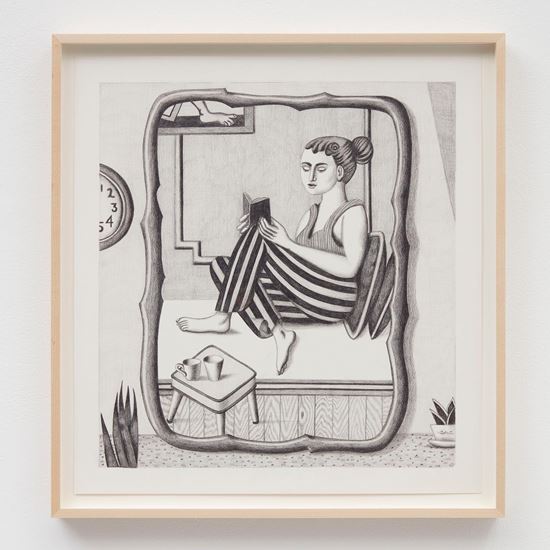 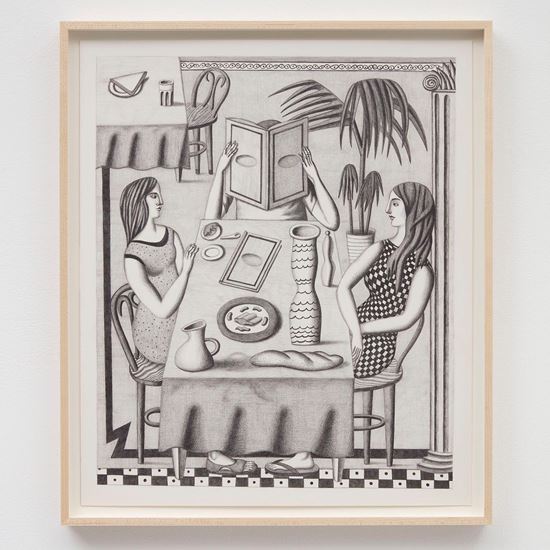 His refined use of tone and shade assures these drawings pack the same punch and compositional clarity as his much sought-after paintings, though this is exquisitely softened by tactile and surreal details.

Casey Kaplan are showing these works online until 6 March 2021. 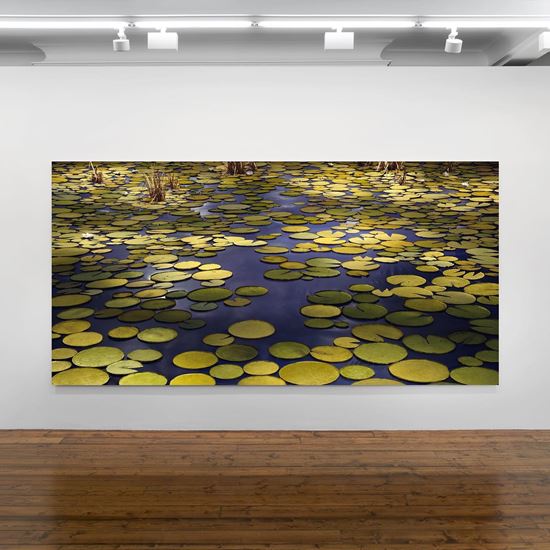 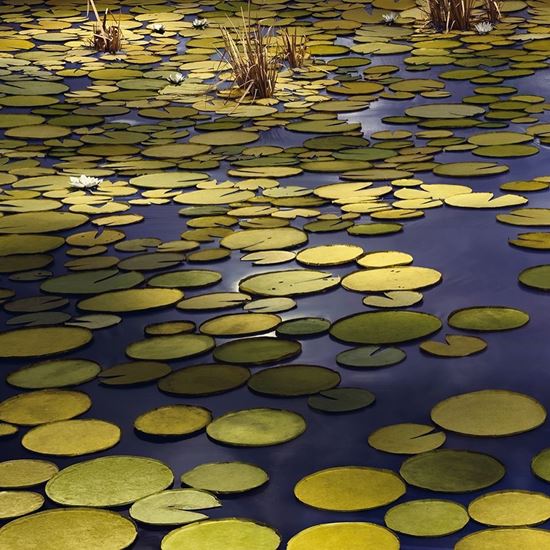 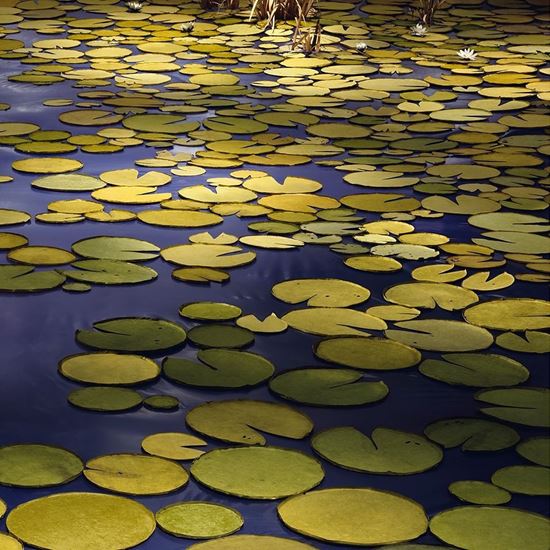 Thomas Demand recreates sourced images in detailed scale models and then photographs them to produce large-format images compelling us to question both how photography functions as a medium and our own relationship with images.

As the artist once said, 'Models provide us with a focus on our world, as its complexity would place an inconceivable load on our apprehension without such filter'.

This incredible image of water lilies is a highlight from his online exhibition showing at Sprueth Magers until 30 April.

The exquisite depiction of natural light and reflection moving across the surface envelops the image with drama and an uncanny illusion of depth. 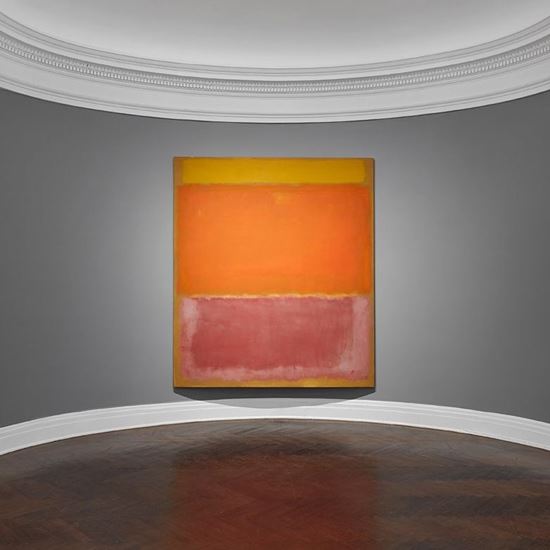 'The whole of man's experience becomes his model, and in that sense it can be said that all of art is a portrait of the idea'—Mark Rothko. 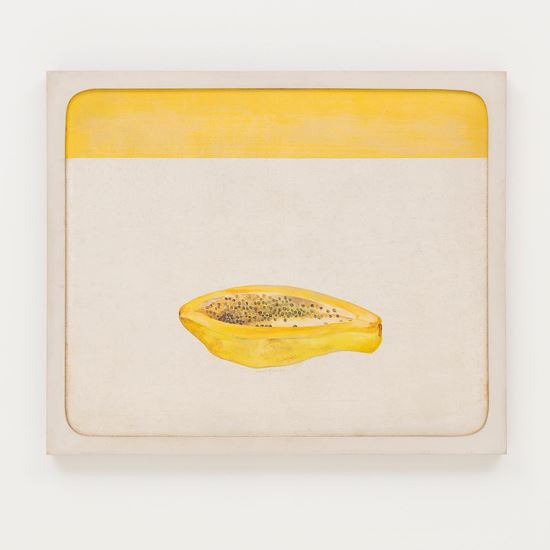 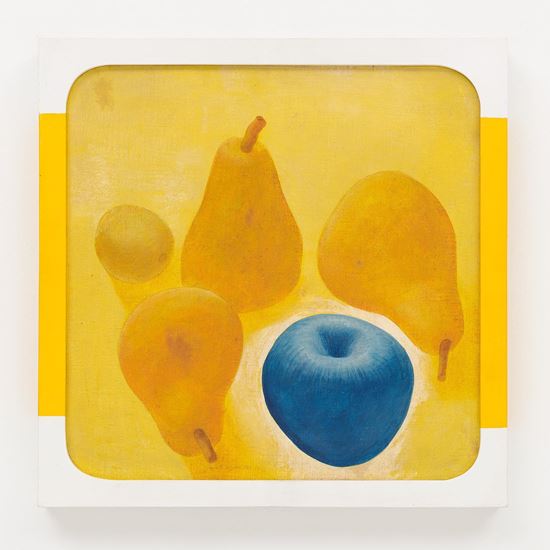 Bergamin & Gomide recently opened an exhibition of the late Brazilian artist Glauco Rodrigues (1929–2004). Acontece que somos canibais [We happen to be cannibals] is on view until 13 March 2021.

These still-life works painted with acrylic on canvas are from the late 1960s after Rodrigues had returned from a few years living in Europe, where he took influence from the Pop Art movement.

The vivid yellow and blue colours used to depict the fruit playfully remove them from the real world, whilst imbuing them with sociopolitical connotations due to their obvious ties to the national flag and Brazilian culture at large.

His use of white as a background and framing device envelops the images with another layer of symbolism referencing Brazil's relationship with colonialism.

Rodrigues excavates objects and symbols associated with Brazilian identity, transforming them into satirical critiques of the foundations these ideals are based on. 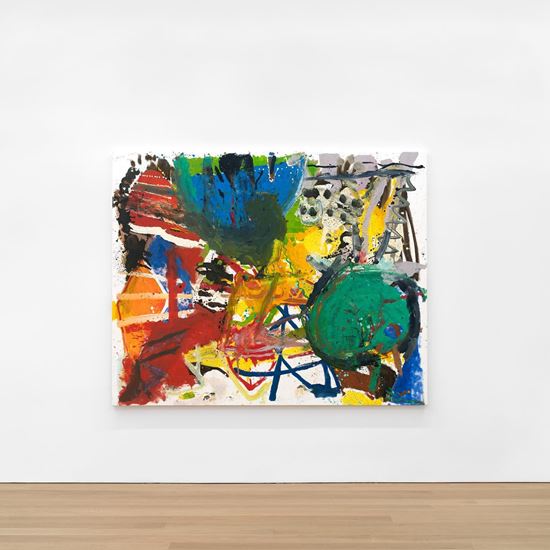 Anke Weyer's exhibition Heart, Heart is currently showing at Canada in New York alongside an OVR until 27 February.

Weyer's large-scale abstract paintings explode with energy and luscious colour. Her thickly applied, loose brushstrokes trace the gestural movements of her body, immediately connecting the viewer to the performance of painting.

Heart, Heart is in reference to the organs' kinetic motion which is channelled through Weyer's rhythmic process. This is the sixth solo exhibition at the gallery for the Brooklyn-based German artist, having been represented by Canada since 2000. 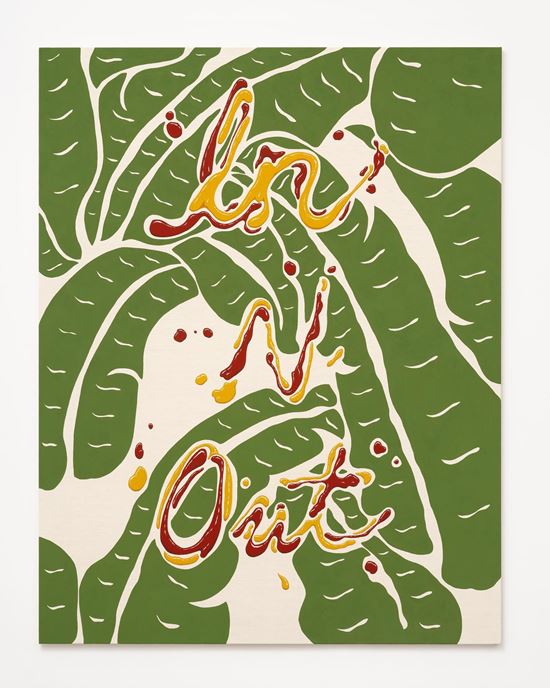 Mesler's playful vocabulary brilliantly merges language and consumer culture imagery to explore themes of childhood, specifically the loss of innocence, while hinting to the continuous journey of self discovery in adulthood.

Untitled (In n Out) is a continuation of this autobiographical approach. Inside a Beverly Hills Hotel plastered in banana leaf wallpaper, Mesler recalls the memory of an event that marked the deterioration of his parents' marriage.

His transition to becoming a painter and his amusing relationship with David Kordansky when the two began their careers in the L.A gallery scene is documented in Boris Kachka's brilliantly written 2018 New York Times article 'How an Art Dealer Became an Up-and-Coming Painter'. 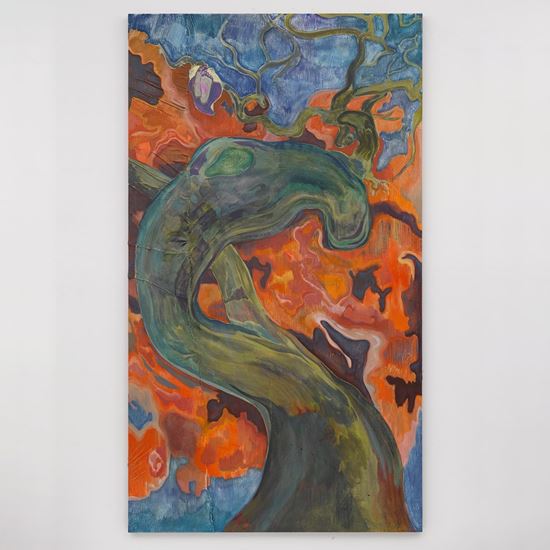 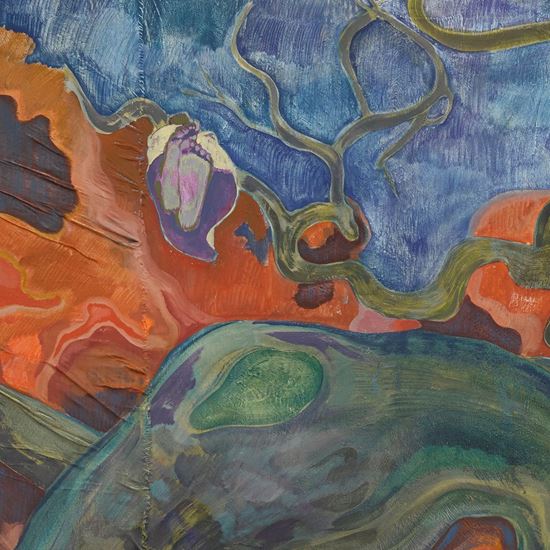 The tensions between figuration and abstraction, tradition and modernity, play flawlessly in Armitage's works, which tackle socio-political issues in Kenya today. Velázquez's undulating figures and the haunting expressions of Goya's protagonists are brought together in his unique lyrical vision.

Strange Fruit, pictured here, presents a sublime example of this mastery. His whimsical brushstrokes and rich colour palette are both heavily influenced by the East African landscape Armitage has encountered throughout his life, having grown up and now living part time in Nairobi.

Represented by White Cube, Armitage's solo exhibition Paradise Edict is currently showing at Haus der Kunst, Munich until 14 February when it will move to London's Royal Academy of Arts from 13 March to 6 June. 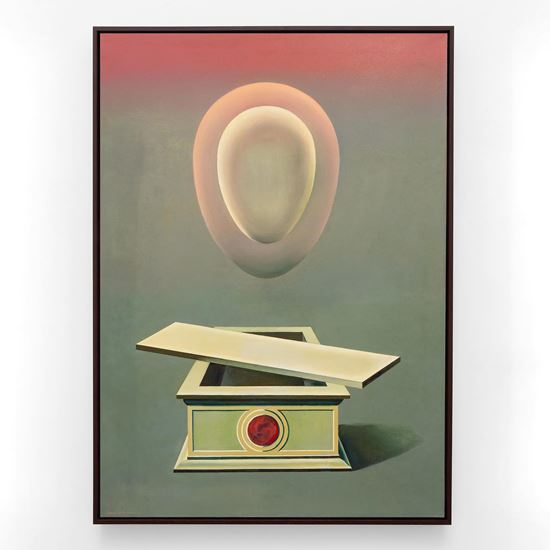 Various Small Fires is hosting a retrospective of the late Clarence Holbrook Carter, an American artist who began his career capturing scenes of the American Midwest during the years of the Great Depression.

As his career progressed, his representational forms transformed into more unearthly landscapes, closely aligning him with that of Max Ernst and Kay Sage and the metaphysical world of Giorgio de Chirico.

Transection No. 2 is part of his series 'Transection', the second of three series being shown in this exhibition. The ovoid, a recurring motif throughout his work, hovers above the open tomb in a state that appears to transcend life and death, and reflecting a metaphysical realm that his psychological landscapes beautifully explore.