Jean-Michel Basquiat's In This Case is the groundbreaking work fronting Christie's 21st Century Evening Sale in New York on 11 May.

In This Case, along with Untitled (1981) and Untitled (1982) are understood as the 'holy trinity' of Basquiat's 'head' paintings, with the latter having gained particular notoriety for being the highest price ever fetched by an American artist after being sold at Sotheby's in 2017 for a little over $110 million. ⁠

In this Case has been exhibited in major surveys at Triennale Milano in 2006, Gagosian in 2013, and more recently, Fondation Louis Vuitton in 2018. ⁠ 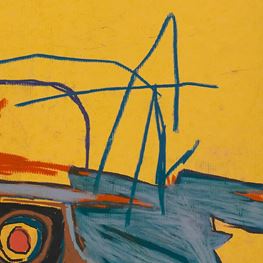