We caught a glimpse of Yuichi Hirako's solo exhibition at Gallery Baton in anticipation of its opening tomorrow in Seoul. ⁠⁠Writing about the artist for Ocula advisory, Rory Mitchell noted that the artists 'surreal, figurative paintings rendered in bold, painterly brushstrokes are indicative of a global trend in contemporary painting', and to 'expect the queue for Hirako's work to lengthen over the next few months'.

'Mount Mariana' is Yuichi Hirako's first solo exhibition at Gallery Baton, having gained growing international recognition off the back of solo shows with Kotaro Nukaga in Tokyo and The Warehouse Gallery in Hong Kong earlier this year. Originally from Okayama in southern Japan, Hirako went on to receive his BFA from London's Wimbledon College of Arts in 2006. ⁠⁠

Hirako's unique style full of hybrid figurations brilliantly combines the classical, and somewhat surreal, fruit and vegetable portraits of the imaginative court painter, Giuseppe Arcimboldo, with fictional settings gleaned from the rural Japanese landscape where he grew up. ⁠⁠

Mystical, ominous, yet strangely alluring, Hirako has created a brilliant body of work for this show and we look forward to following his career closely. 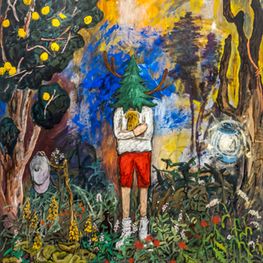