Peter Doig's masterpiece Swamped (1990) is returning to auction for the third time at Christie's next month.⁠⁠

The work previously sold for £26 million—also at Christie's New York—in 2016. Anticipation for this sale is high as the work is expected to exceed Peter Doig's current auction record, which currently stands at $28.8 million.⁠⁠

A 2015 lot essay noted how Doig 'captures the mesmerizing atmosphere of a moonlit lagoon, with a mysterious white canoe situated at its heart . . . What sets Doig apart from any other painter in history is his ability to embody landscape in the brushstroke. Each painting from this period of the early 1990s offers a masterful rendering and layering of paint, which can be read both as abstraction and as a celebration of the physical properties of nature.'

⁠⁠According to Artnet's Price Database, more than 65 works by Doig have sold for over $1 million at auction. Swamped will be presented at Christie's London during Frieze Week, before travelling to Christie's Los Angeles from 20 October, then returning to New York to be auctioned at their November evening sale.⁠⁠ 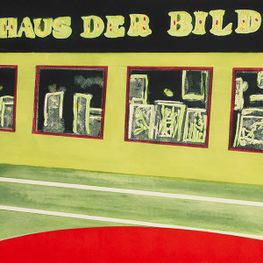