Leaning into a naïve style, Robert Nava's paintings are chaotic as much as they are harmonious.

Nava graduated from an MFA at Yale University in 2011, and has since had solo exhibitions at galleries including Night Gallery in Los Angeles, Vito Schnabel Gallery in New York, and Sorry We're Closed in Brussels.

The artist's much-anticipated solo show Thunderbolt Disco at Pace Gallery, running until 25 June, is his first since joining the gallery in 2020. 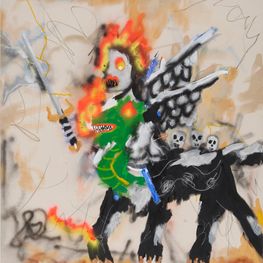