The art fair is now closed but you can continue to browse the viewing rooms and artworks that were available. 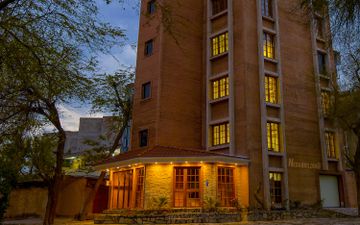 While each artist's work represents a different variety of approaches towards the objective world, they are arguably some of the best components of Iranian figurative art in their ability to transcend the mere mimesis of familiar spaces and objects. Each in their own way, they are dealing with themes rooted in their life experiences and the environments they are intimately familiar with.

Ali Zakeri (1959) – who had his own brush with violence as a young soldier on the battlefield – has painted symbolic pictures of boxers fighting in a bare, vast, and dark arena. Rendered in bright, visceral colors, and bold, expressive brushwork, each scene delivers a raw sense of violence and pain.

Moslem Khezri (1984), who has also been an art teacher, offers intimate, nostalgic images of young boys confined to classrooms under the poetic but pale autumnal sunlight.

Abbas Nasle Shamloo's (1981) deceptively realistic landscapes, on the other hand, are in fact many-layered imagined vistas inspired by the green-grey and moist nature of northern Iran that has become his new home in the past few years. Coming from a region deeply affected by drought, Abbas has been both interested in and concerned about the environment and humanity's increasingly destructive and pathological alienation from mother nature.