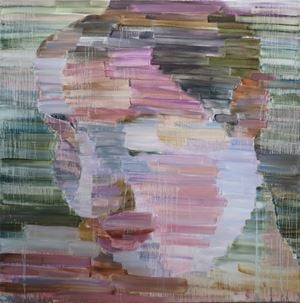 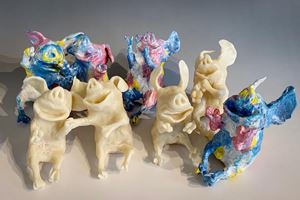 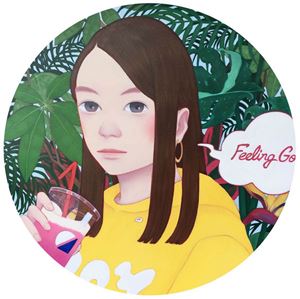 #8ARTISTS is a collective exhibition, opening on the 8th of August 2019. A2Z Art Gallery has selected a group of 8 artists and presented each with a challenge to create artworks that are more instagramable. The selected artists enter into a dialogue that investigates the importance of social media in society and how the advantages and disadvantages cross over into the art-world[s].

To quote the Greek philosopher Heraclitus, 'Change is the only constant' and true to this fact, in just a little more than a decade, humanity has adopted the use of social media platforms as part of our everyday life. It's estimated that over 3 billion people are currently using social network apps such as Instagram. Artists are increasingly using these platforms to reach a wider audience; such actions have definitely made the art communities larger and the art-world[s] more accessible.

In contemporary society, social media is being used as a tool to achieve altogether very different outcomes and in a world that often feels divided, it can depend on which camp you belong to socially or politically as to how you view these online, social activities; positive or negative. The risk versus reward is more often than not, too irresistible, and for the average person risks are thrown by the wayside. Risk, invariably being the dumbing down of society and the health issues that accompany using social media and Reward, on the whole being dopamine hits or in many cases social or even financial gain. Is social media applied in this way and having the same effect toward art?

Historically, artists would have had to work harder to gain the respect of galleries and museums. Whilst a popular notion has been brought to debate in recent years among art world stakeholders that, social media is now dividing the art-world. There are schools of thought that support either argument and in every generation of artists and art professionals you can't help but find expanding support for the benefits of social media.

This phenomenon is causing developments in social behaviour one way or another. Whilst in art it can even directly affect a gallery's selection process. In some cases galleries are signing artists based on the amount of Instagram followers they already have. Just as inevitably, in our new age and tech-savvy society, the more beautiful people on social media or social media influencers are rewarded with dividends, in return for a form of materialistic worship. Meanwhile in art, more attention is paid to the Instagramable look of an installation rather than content and what the artist is actually trying to say.

Let's say art can only be digested for its initial impact taken from surface value or the artworks' aesthetical prowess when viewing an artwork on social media. With new technologies such as 5k camera's and virtual experiences, the extent to which we can contemplate and scrutinise an artwork through this media is improving. However important social media has become to both society and the art-world[s] there is no match for viewing the artwork live'.

3 new artworks have recently been added by A2Z Art Gallery.
Sign up now to be among the first to know when new artworks are added.
Sign Up
}