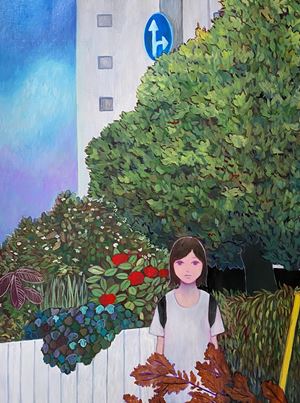 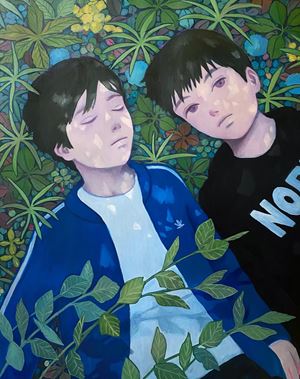 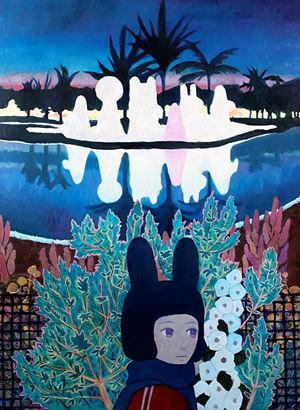 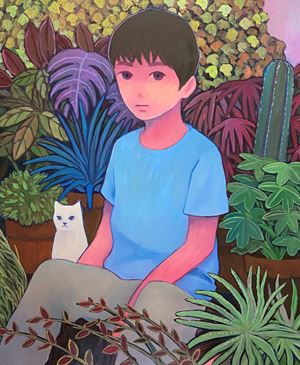 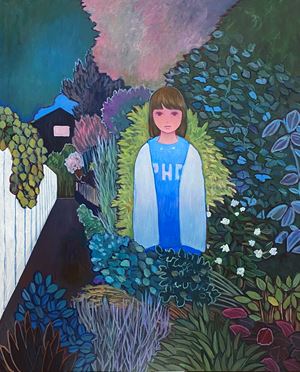 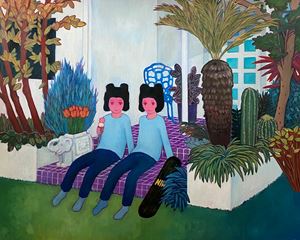 'The reason I draw young people is because I am interested in their optimism, purity and cruelty of ignorance. It's almost as if they are unstoppable superheroes. I am drawing them as role models for ayounger me to aspire towards. I admit I am projecting myself onto them.'

As a child Horikoshi developed what he called, 'a beautiful outlook on life'. Whilst this might seem positive, this was a reality that nobody seemed to understand and the fact that he didn'thave anyone to share this emotion with, caused a powerful sense of sorrow resulting in profound introspection, which evidently resonates deep within his subjects. This sensitivity; being able toidentify with his true feelings, as young man, who came to terms with being gay, conduced a stateof sadness that can be found at the center of his works.

'It's not that being gay is the most important part of my identity. I've been trying actively to avoid that sort of thing. I am hopeful that the young people of today have within them an amazing power to look into the future, and this will have a positive impact to the world as we have known it.'

For the exhibition,『Happy City』,the artist depicts youth in the city. The works are born out of a deep-rooted and perhaps childish love for the city. This is indeed a love that wholly exists within the artist psyche, manifesting when he often walks through the urban streets, thus expounding a powerful source of artistic inspiration. Horikoshi adores the city for it being a place where people, plants, animals, and urban infrastructure all coexist in a friendly and symbiotic relationship. In this new body of works, Horikoshi portrays a chaotic, yet neutral world. It is through personal experience, he became self aware that living in an urban environment can positively impact one's life greatly. The x and y generations living in Hong Kong may well seem the same as the youth living in Japan, but they are in many ways, completely different. On hearing about the protests in Hong Kong, this made the artist all too aware of this.'

'I think if I stayed in the countryside because of my sexuality, that it would have been extremely difficult for me socially.Therefore I put all my feelings into my works; wanting the city to be a happy place for everyone.'

Many people point out the artists influence of manga and anime in his artworks, and if he were to name the biggest influences it would have to be shoujo manga in particular. Shoujo manga tends to have love as a central theme, with a focus on the psychology of the characters. More often than not, manga portrayed a progressive view of gender, and reading such works when he was young brought on feelings that he wasn't actually alone in the world.Therefore his drawings took on a very sensitive, emotive and beautiful narrative, as he was heavily influenced by his inspirations. This is evident in his character designs that we see to date.

Sign up to be among the first to know when new exhibitions by Tatsuhito HorikoshI or at A2Z Art Gallery open.
Sign Up