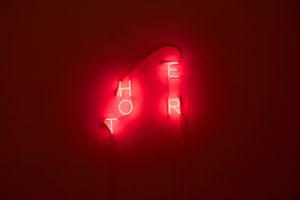 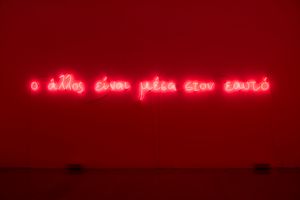 Eugenia Raskopoulosο άλλος είναι μέσα στον εαυτό (the other within the self), 2021Neon
50.5 x 467.8 cm Arc One Gallery Contact Gallery
View More Works By This Artist

One of Australia's most highly respected artists, Eugenia Raskopoulos, returns to Melbourne this March with a new solo exhibition, the shadow of language.

Quoting Roland Barthes, Eugenia Raskopoulos declares: "Language is a skin: I rub my language against the other. It is as if I had words instead of fingers, or fingers at the tip of my words."

Raskopoulos has developed a singular practice concentrated on themes of language, identity, the body and processes of translation and transcription. In the shadow of language, the artist highlights the seductive fluidity of language, using pink lipstick and florescent light to smear, trace and flash words into repeated circular formations. Written in Czech, Greek, English and binary code, these gestures and words are recorded in still images and neons which merge performance, writing, drawing, coding and installation to explore language as (mis)understanding.

"the shadow of language reveals the inherent instability not just of language and translation but also the notions and entities language defines: neutrality and power, gender and humanity; subject and object; desire, fear and predation; action, reception and responsibility. With its apparently genderless articles and nouns, English is ideal for the ur-text in the photographs. We are free to imagine a plethora of erotic exchanges, participants and moods from these phrases: whirls of possibility as described by the pink lipstick. Or restrictions overlaid by a language not of the body: binary code. And any reference to skin takes us to race, identity, prejudice, division and pain." - Fiona McGregor, 2021

the shadow of language

Sign up to be among the first to know when new exhibitions by Eugenia Raskopoulos or at Arc One Gallery open.