El Anatsui grew up in the hopeful 1960s, a period typified by the profound search for social and personal identity. This search became a central theme that he's investigated throughout his life and art. He interrogates the erosion of tradition, as well as its survival and transmission into the future.

Most of Anatsui's sculptures are composed with materials that were once designated for another purpose. His early works were built from broken pottery or old wooden logs, which he cut up using a chainsaw. Over the past decade, Anatsui has focussed on large, tapestry-like metal sculptures that are delicately constructed from thousands of colourful liquor caps. He reworks and rearranges found objects, transforming materials into something new without them losing their own history. His work could be described as a collage of discarded memories. Anatsui recombines them into his own, never-fixed syntax, which the viewer is invited to adapt freely, bringing in their own history. The meaning of Anatsui's work is fluid, just like textiles and perception. 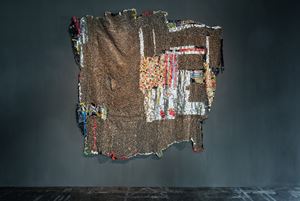 Related Video & Audio El Anatsui: ‘The golden rule is, there are no rules’ 7 June 2019, Art Basel

In this video, Ghana's best-known contemporary artist, El Anatsui, speaks about the role that language and symbols play in his work. He describes how the abstract nature of West African "adinkra" symbols and the flexibility of meaning in the words of his native language of Ewe resonate with the concept of non-fixity and indeterminateness...