Yun Hyong-Keun, former member of Korean art movement Dansaekhwa, became best known for his 'Umber Blue' paintings. Yun’s inspiration came from nature when he witnessed a tree and its roots dissolving into the soil of a mountain. Strongly impressed by the scene, Yun decided to capture the essence of nature in his work.

Honesty and truthfulness of nature gave way to muted, receded colours, and a simple composition of bold squared-shaped fields in earthly shades. Over time, the artist reduced his colour palette to ultramarine blue and burnt umber. Yun consecutively applied the heavily diluted paints directly onto the linen canvas on top of each other. Due to the characteristics of these materials, paint smears into canvas quickly and creates blurred margins around the bars. Different rates of colour absorption can be seen, as each brush stroke is unique. The process is very natural and organic, like water soaking into the soil.

Yun’s work is often referred to as Korean minimalism. Donald Judd discovered the structural aesthetics in Yun’s monochrome paintings in the 1990s when Judd saw it in the artist’s studio during Judd's visit to Korea for a solo exhibition at Inkong Gallery in Seoul. Judd expressed high praise for Yun's simple structural work and invited Yun to exhibit his work at the Judd Foundation in 1993. Yun agreed and the show included a selection of twenty paintings. One year later, Yun's exhibit travelled to the Judd's Chinati Foundation in Marfa, Texas. 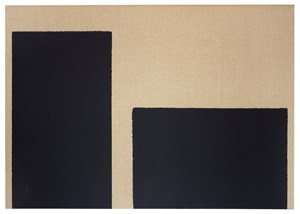 Yun Hyong-keun at Palazzo Fortuny, Venice, is the first international retrospective exhibition of the eponymous Korean artist's work since his death in 2007. Curated by Kim Inhye, the retrospective

'He was not a "political" kind of person. He just wanted to be honest and straight. But it was not easy in Korea to live like that,' writes curator Kim Inhye on artist [Yun Hyong-keun][0]. For much of

When Donald Judd asked Yun Hyong-Keun what art is, the latter responded that art is 'artless and bland.' To some viewers of Yun's paintings—which have been associated with Korean Dansaekhwa—these wo

Yun began developing his characteristic, nearly monochromatic, paintings in the late 60's and early 70's by placing canvas on the floor of his studio and adding stripes of umber and/or ultramarine pig

Comprising a survey of twelve paintings, this exhibition presents a thoughtful overview of Yun Hyong-keun’s (1928 – 2007) quietly compelling work. Yun was a central figure within the Korean group of monochrome painters known as Dansaekhwa that emerged during the mid 1960s. A characteristic shared by the members of this group is a...