Paul Gauguin (French, 1848–1903) was a painter, printmaker, and sculptor associated with the Post-Impressionist and Symbolist movements. He studied under Camille Pissarro, and refined his artistic style amid other avant-garde artists in Pont-Aven, Brittany. In 1888, Gauguin moved to Arles in the South of France to join his friend Vincent van Gogh for two months, during which time they painted together. By 1891, Gauguin renounced urban values and traveled, hoping to experience a culture and place unmarred by Western ideals and priorities; these travels inspired a bold, new style in his artwork.

Known for his innovative use of colour, Gauguin often used different hues to convey emotion, rather than represent nature as it really existed. One of his best known works from the 1890s, Where Do We Come From? What Are We? Where Are We Going? (1897), features groups of Tahitian figures in a colourful, outdoor setting. Meant to be read from right to left, the symbols and imagery represent the stages of life and afterlife. Having a significant influence on the trajectory of Modern Art, his works are included in the collections of the Musée d?Orsay in Paris, The Museum of Modern Art in New York, the National Gallery of Art in Washington, D.C., and the Museum of Fine Arts, Boston, among many others. 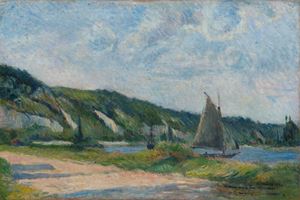