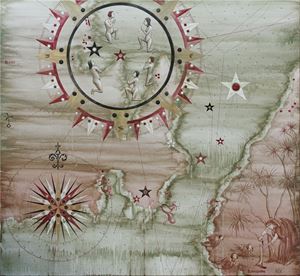 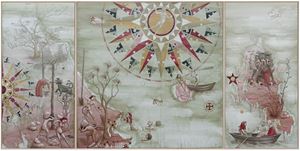 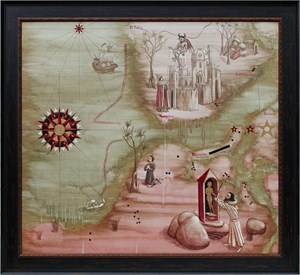 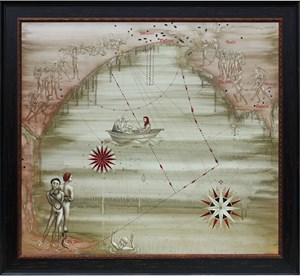 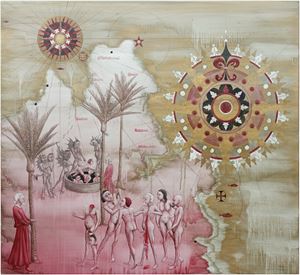 Following the success of his outing at the Auckland Art Fair in May, we are delighted to present Roger Mortimer's seventh solo exhibition in the gallery.

Karori sees the ongoing development of his distinctive juxtapositioning of contemporary marine maps of Aotearoa New Zealand with medieval imagery. While finely rendered compasses have often been included in Roger's map paintings, here we see a dramatic increase in scale, with the compass taking on the appearance of a mandala, suggesting the need for guidance in the spiritual as well as the material world. The form of these compasses with their distinctive triangle and circle forms is drawn from medieval maps but with a nod to Māori kowhaiwhai.

A drive to understand Māori perspectives has been part of Roger's practice since he first entered Elam School of Fine Arts at the University of Auckland and went through the Te Toi Hou (Maori Arts) programme. His art has always 'looked to the past to approach the future' to paraphrase the famous whakataukī (Māori proverb).

In acknowledgement of prior occupation of Aoteroa, Roger has removed European place names from his 'maps' and left the Māori names, some well-known, others marking lesser known places, mountains, rivers and events. Speaking at the Auckland Art Fair about Roger's work art historian Linda Tyler observed that in referencing the country's dual histories and bringing together European painting with Maori history, without appropriation or borrowing of symbolism, Roger can be seen to be ahead of his time. In using Māori place names as titles, he also emphasises the local.

At a time of huge anxiety in the world, Roger's work speaks to the notion of the moral imagination. How do we collectively construct a vision of right and wrong when so many in the western world no longer believe or trust in 'the given', in the untrammelled 'progress' of capitalism and concepts of heaven and hell that have defined and shaped western thinking and social frameworks?

The exhibition comprises five paintings including the magnificent large triptych Pakiri which covers the north Auckland east coast from Tawharenui in the south to Ruakaka in the north and includes Little Barrier and Great Barrier Islands. We also have Karori which covers the entrance to Wellington Harbour; Whariwharangi in Tasman Bay; Te Kaha - the entrance to Raglan Harbour and Te Kuri - Poverty Bay.

Sign up to be among the first to know when new exhibitions by Roger Mortimer or at Bartley & Company Art open.