The Scottish artist Stephen Conroy (*1964) is known for his bold figurative language.

Male figures occupy the centres of Conroy's compositions, with a special focus on their mental and psychological condition. They are realistic depictions, but extracted from any spatial context in order to focus all attention on emotional states and psychological tensions. With this subject and the unembellished intensity of his portraits, Stephen Conroy stands in the tradition of British figurative painting alongside such greats as Francis Bacon and Lucian Freud. Conroy is represented in international collections, including the National Portrait Gallery in London, Great Britain; the Metropolitan Museum of Art in New York, USA; the Scottish National Gallery of Modern Art in Edinburgh, Great Britain; and the Whitworth Art Gallery, Manchester, Great Britain.Stephen Conroy was born in 1964 in Helensburgh, Scotland and studied at the Glasgow School of Art, Glasgow (GB) from 1982 to 1987. He lives and works in Scotland. 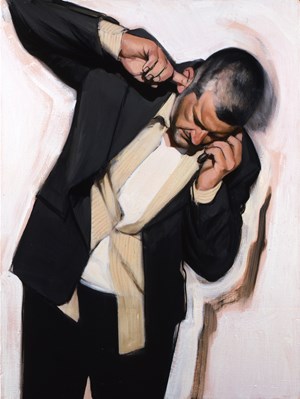