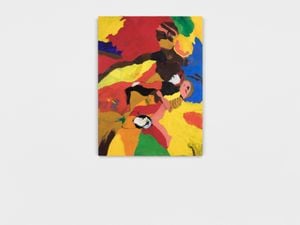 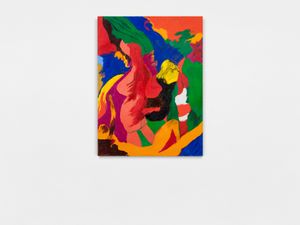 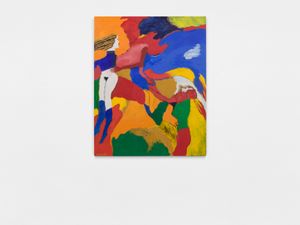 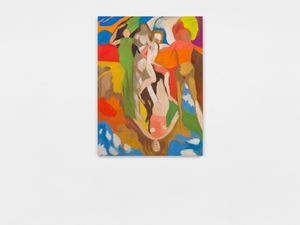 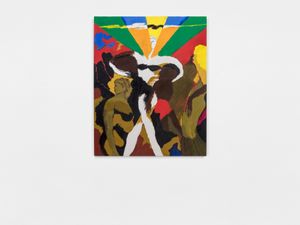 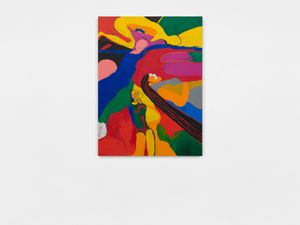 On the occasion of Art Basel OVR: Pioneers, Blum & Poe, in collaboration with the Robert Colescott Trust, is pleased to present a rarely seen group of paintings by Robert Colescott from his pivotal time in Cairo and Paris, 1964–1969.

Colescott's experiences in Cairo represented one of the most dramatic turning points in his career. In the words of art historian and curator Lowery Stokes Sims, 'The contact [Colescott] made in those years with Egyptian culture and the African continent sparked within him the realisation that his art need no longer be exclusively European in orientation.' When Colescott first visited the Valley of the Queens at Thebes in 1964, he felt the 'spirituality of the place' and sensed a female presence in the landscape, as though 'the walls of the canyon seemed to have sculptural form, like women.' His compositions became looser and more expressive, with figures unmoored from a flat plane. Being exposed to three thousand years of indisputable Black art history in Egypt also freed Colescott to deal with Black subjects in an unselfconscious way. In his words, 'it helped my sense of monumentality a great deal because the Greek and Roman monuments are puny compared to the Egyptian and lack the inner vitality and magic that those works of art have.'

On the cusp of the Six Day War in 1967, Colescott's time in Egypt was cut short when he was forced to leave Cairo. A few months later he and his family landed in Paris, where he studied under Fernand Léger nearly two decades earlier. The influence of Egypt and Africa operated unabated in his work at this time: elongated, floating figures emerging from landscapes, faces popping into view, arms and legs materialising where flesh and earth tones meet gestural fields of pure colour. We see the clear development of Colescott's signature narrative sensibility and a more cartoon-like figurative style taking shape from 1967–1969. In these works, the issues of race, sex, politics and conflicting standards of beauty that had been playing out in his interior were placed at the forefront.

According to Sims, 'during this period Colescott began to develop a syntax for expressing his perceptions about himself and his world in a manner that would not only be highly individual and personal but also allow him to undertake a non-didactic and undogmatic critique of the social, political, and economic conditions of this country.' Colescott's Cairo-Paris years mark the artist's intense interest in painting's failure to accurately represent the Black experience and his devotion to revisionist art historical narratives, the artist's intense interest in painting's failure to subsequently influencing multiple generations of artists.