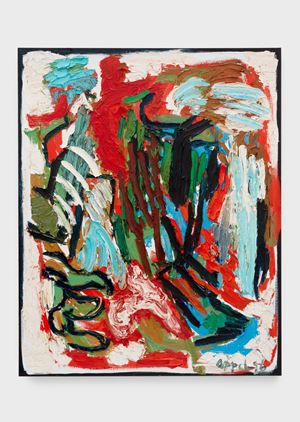 October 22, 2020, Los Angeles, CA — Blum & Poe, in collaboration with the Karel Appel Foundation, is pleased to present six paintings by influential Dutch artist Karel Appel (1921–2006) from his mid 1990s series 'Out of Nature'. Appel painted these works in New York, and they are visually coded with his love for the city and the generative experiences he had there over the course of a lifetime.

Through the years, Appel came to establish multiple studios across the globe that he would travel to for a shift in environment, light, and daily rhythm. Some locations were incubators for contemplation, and others offered excitement and community. As art historian Rudi Fuchs told it in 1990, 'Each of the studios has its own atmosphere. The one in New York is, I think, the most charged. There he is the closest to the 'art scene' of older and younger artists whom he keeps a pretty close eye on (life in the studio is not confinement), and it is because of this that the New York studio is the most experimental.'

Although Appel created these 'Out of Nature' works in 1995 as a mature artist in his seventies, stylistically they channel a seminal and nostalgic time for the artist in 1950s New York in which he was surrounded by cultural producers of the era's avant-garde including Sam Francis, Jackson Pollock, Willem de Kooning, Franz Kline, and jazz luminaries Dizzy Gillespie, Miles Davis, Count Basie, and Sarah Vaughan. This timeframe followed his co-founding of the playful, spontaneous CoBrA group (1948–1951), a decade in which his practice focused on the immediacy of painterly expression and the uninhibited artistic experience.

Appel's work developed over his career to span a diverse oeuvre of painting, drawing, and sculpture, shifting between abstraction and figuration, sometimes rooted in more classical artistic traditions, never content to settle on one style. The Out of Nature oil paintings on five-foot canvases recall the artist as a youthful man in their primal strokes and visceral qualities. This moment in Appel's trajectory was captured in the famous 1962 Jan Vrijman film The Reality of Karel Appel, in which the artist wrestles his paint onto his substrate with explosive energy. As Appel put it at the time, 'I do not paint, I hit.'