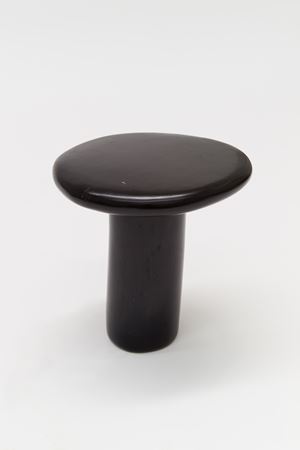 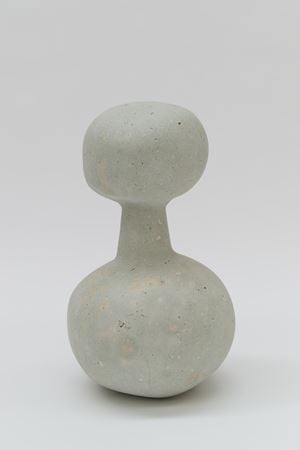 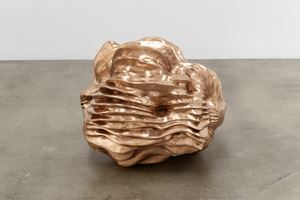 Blum & Poe is pleased to present a solo exhibition of new sculpture by Alma Allen, showcasing work made after the artist's recent relocation from Joshua Tree, CA, to Tepoztlan, Mexico. The pieces continue the compulsive and prolific explorations of a singular sculptor with a recognisable and idiosyncratic visual sensibility, who creates psychologically charged forms in stone, wood, and bronze.

In talisman-like handheld objects in silver and bronze, and in large-scale forms contoured from 500-pound burls of wood and slabs of stone, Allen's works are exacting in their fluidity. These non-referential forms at once evoke the familiar and the nameless, drawn from the trauma and wilfulness that have marked the artist's life and his own specificities of resonance and recollection. In Allen's sculptures, and in their intimations of squeezing and stabbing and smoothing, is a distillation of visceral pains and pleasures: of a clenching or a letting go or opening one's eyes to the sun after a nap. How the action of sculpting becomes the sculpture itself is apparent in Allen's work, the result of a physical acting out, punctuated by its recurring themes of organs and violence. Many of the works present a single minimal motion, carved and polished over the course of many months. It is a laborious process, to seek immediacy. There are jokes, too.

These sensuous biomorphic works are all called Not Yet Titled—Allen says, 'I don't title my work because I don't want people to think of me when they see it. I prefer to be hidden.' A young teenage runaway from a deeply religious background, Allen made his way to New York City, selling his hand-carved sculptures atop an ironing board table on the streets of SoHo to survive bouts of homelessness. Unknowingly stationed in front of the now defunct Jerry's restaurant that was an art gallerist social hub, Allen's work sold to established designers and collectors. The carved and hand-moulded work in the current exhibition is similarly unframed by title or representational reference, forcing the viewer once again to see for themselves, as did those on the sidewalk long ago. An investigation into the biographical via abstraction, Allen offers a new body of work unaffiliated with a particular current movement but connected to a long canonical history of sculpture as compulsion and consolation.

This presentation follows a two-person traveling exhibition pairing Allen's work with JB Blunk's at the Palm Springs Art Museum and the Nevada Museum of Art. It precedes the publication of the first comprehensive monograph on the artist's work, slated for spring 2020, co-published by Rizzoli Electa, Blum & Poe and Kasmin Gallery, and featuring new scholarship by curators including Douglas Fogle and others.

Alma Allen (b. 1970, Heber City, UT) participated in the 2014 Whitney Biennial where he gained recognition and a wider discovery of his work. He had his first solo exhibition at Blum & Poe, Los Angeles in January 2015 and later at Blum & Poe, New York in September 2016.

Sign up to be among the first to know when new exhibitions by Alma Allen or at Blum & Poe open.
Sign Up