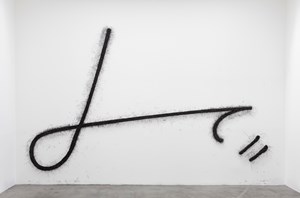 Tony Lewis"What is dangerous here is a turning away from...the turning away from...anything any white American says. … But I don't know, and neither does Martin Luther King—none of us know—how to deal with those other people…who don't believe anything the white world says, and don't entirely believe anything I or Martin say", 2019Graphite powder, screws, and rubber bands
Blum & Poe Contact Gallery 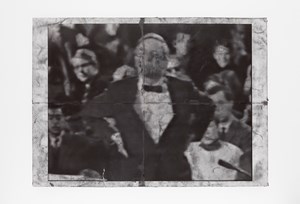 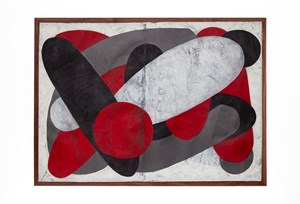 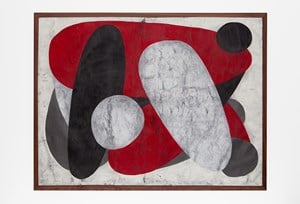 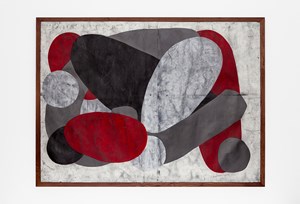 Blum & Poe is pleased to present the gallery’s second solo exhibition with Chicago-based artist Tony Lewis, entitled Charlatan and Ultimately A Boring Man. This exhibition showcases disparate facets of Lewis’ practice, harnessed here together to confront a fraught milestone in contemporary intellectual history that the artist has long grappled with—William F. Buckley’s argument in the historic 1965 debate with James Baldwin on the motion 'the American dream is at the expense of the American Negro.'

This exhibition conceptually and formally responds to work Lewis began as far back as 2011—the transcript and video documentation of the Baldwin v. Buckley debate is source material the artist revisits cyclically. Prompted by the words of Baldwin, Lewis engages with the notion of 'turning away from' by actively challenging his natural feelings of repulsion and anger registered when analysing Buckley’s language, thesis, and rhetorical strategies. Endeavouring to confront the greater apparatus of racism and white conservative psychology, here Lewis meditates on the entirety of Buckley’s argument, and more specifically on one pivotal line from which he has extracted his exhibition title:

'There is no instant cure for the race problem in America, and anyone who tells you that there is…is a charlatan and ultimately a boring man—a boring man precisely because he is then speaking in the kind of abstractions that do not relate to the human experience.'

Buckley’s words echo throughout the exhibition, his likeness is projected directly on the gallery wall. This demanding subject matter carries forward Lewis’ established practice of utilising the medium of graphite to investigate language linked to structures of power and their inherent systems of exclusion, and to puncture such social and political issues as race, communication, and labor. With Charlatan and Ultimately A Boring Man, the viewer first encounters the artist’s shorthand drawings—a visual and gestural lexicon adopted from the John R. Gregg shorthand glyph system of dictation—the works all share the graphite phonemes for the word 'boring.' The following gallery houses Lewis’ original site-specific floor drawing from 2011, a graphite-coated sculptural work on paper, with a new collage poem entitled Man. As a conceptual refuge in an adjacent room, a labor-intensive drawing rendered in black screws threaded with graphite-soaked rubber bands takes its shape from the shorthand gesture for the name 'James.' Beyond a projection of Buckley’s monologue, we encounter another floor drawing from 2014, this time erected and haunting, alongside another shorthand drawing handwritten directly on the gallery wall, 'charlatan.' Finally, a second new collage poem created exclusively for this exhibition—the longest of the artist’s to date, a very personal and emotional response to Buckley’s argument.

Charlatan And Ultimately A Boring Man

Sign up to be among the first to know when new exhibitions by Tony Lewis or at Blum & Poe open.