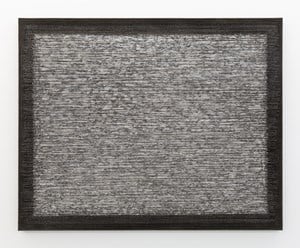 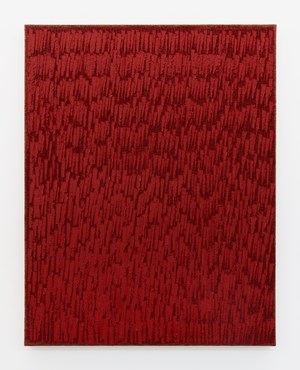 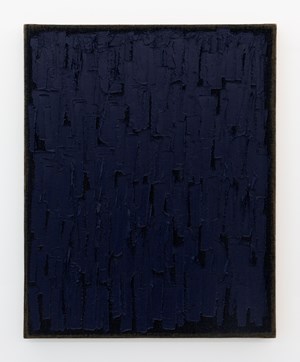 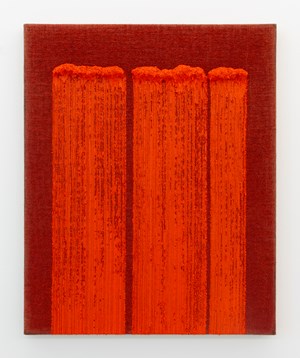 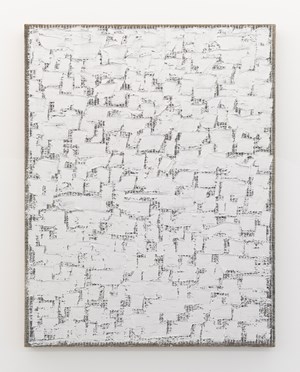 Blum & Poe is pleased to present a solo exhibition of new paintings by Ha Chong-hyun. This is Ha’s third solo show with the gallery, and his first solo presentation in Tokyo in fifteen years.

Ha Chong-hyun is one of the pioneering figures in the postwar art history of Korea. Amid the extreme material deprivations and an authoritarian political system during the 1960s and 1970s, he explored the potential of unorthodox materials such as newsprint, scrap lumber, and barbed wire attached to canvas. In 1974, he began to focus on the materiality of paint and canvas as more than a mere support through the 'Conjunction' series. In these works he uses tools to push monochrome oil paint through the back of coarsely woven burlap so that it protrudes through the surface. Thereafter he brushes or smears the paint into a wide variety of abstract compositions. This exhibition presents new and recent works from the 'Conjunction' series that use rich hues of blue, red, and orange, as well as paintings that Ha made by holding a flame to the surface, altering the chemical makeup of the paint. Once the white surface has turned a smoky grey, the artist scrapes away horizontal or vertical lines to reveal the untouched white pigment beneath.

Ha Chong-hyun and his peers came to be known as the Dansaekhwa movement, which includes artists such as Lee Ufan, Park Seobo, Kwon Young-woo, Yun Hyong-keun, and Chung Sang-hwa. Although the term literally means 'monochrome painting,' it is defined by the methods employed as much as its reductionist aesthetics. The artists variously pushed paint, soaked canvas, dragged pencils, ripped paper, and otherwise manipulated materials in ways that troubled the distinctions separating ink painting from oil, painting from sculpture, and object from viewer.

The history of Dansaekhwa is intimately tied to the Tokyo art world. In 1975, Tokyo Gallery held Five Korean Artists, Five Kinds of White, a survey of artists working in monochromatic modes. This exhibition is widely acknowledged as a major early milestone in the understanding of this movement. Although Ha was not included in this exhibition, he has held solo shows at Gin Gallery, Tokyo, Japan (1972); Muramatsu Gallery, Tokyo, Japan (1979); Kamakura Gallery, Tokyo & Kamakura, Japan (1985, 1990, 1994, 1997, 2001); and Gallery Bijutsu Sekai, Tokyo, Japan (2002, 2004). Furthermore, as Joan Kee, the leading academic expert on Dansaekhwa has observed, many Dansaekhwa artists were drawn to Mono-ha, not least because of Lee Ufan’s central role in both movements. Lee’s philosophy and practice had an important influence on Ha’s early work: at Gin Gallery in 1972 Ha exhibited a lumbar beam balanced on a short length of rope strung between two walls, a site-specific installation of interdependent material and spatial relationships that recalls the work of several Mono-ha artists.

Previously, Ha was featured in the survey From All Sides: Tansaekhwa on Abstraction, held at Blum & Poe, Los Angeles, CA in 2014, and curated by Joan Kee, Associate Professor of History of Art at the University of Michigan. Subsequently he was included in Dansaekhwa and Minimalism, which traveled from Blum & Poe in Los Angeles to New York in 2016—the first exhibition to compare and contrast Korean monochromatic painting with American Minimalism. This solo exhibition at Blum & Poe Tokyo follows two major exhibitions of Dansaekhwa in Asia: the Rhythm in Monochrome: Korean Abstract Painting at Tokyo Opera City Art Gallery, Tokyo, Japan (2017), and Korean Abstract Art: Kim Whanki and Dansaekhwa, Powerlong Museum, Shanghai, China (2018–19). 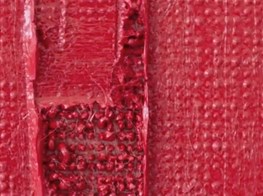 Ocula Insight Ha Chong-Hyun: An Introduction to a Leading Artist By Ocula IGTV

In this IGTV video, Felicia Chen, associate director of Blum & Poe, Tokyo, provides a short but insightful introduction to Korean-born artist Ha Chong Hyun 's practice through a discussion of the works exhibited by Blum & Poe in the artist's solo exhibition, which took place at the gallery's Tokyo space between 23 March–18 May 2019)....

Sign up to be among the first to know when new exhibitions by Ha Chong-hyun or at Blum & Poe open.