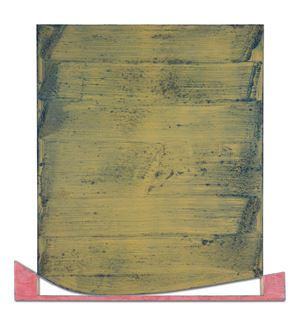 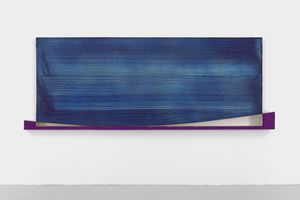 Blum & Poe is pleased to present a selected survey of work spanning three decades by the late artist Harvey Quaytman. This is the gallery’s first exhibition of work by this critical figure in late-20th century American abstraction following the announcement earlier this year of co-representation of the artist’s estate along with Van Doren Waxter.

Harvey Quaytman (b. 1937, Rockaway, NY; d. 2002, New York, NY) came of age in the downtown art scene of 1960s New York, living and working in SoHo studios first on Grand Street and later at 231 Bowery, where he would remain through the late ’90s. Long considered an artist’s artist, the painter enjoyed a close-knit and vibrant artistic and social milieu, over the years sharing studio addresses with Brice Marden, Ron Gorchov, and James Rosenquist, among others. Quaytman’s emerging career as a young painter began in the heyday of Ab Ex with a marked allegiance to Gorky and de Kooning. This approach was slowly shed as the decade unfolded, as his work began to lean towards sculpture—compositions with curvilinear shaped canvases and rectilinear U-shaped bases that inhabited a newfound objecthood. This was followed by a forty-year engagement with geometric abstraction, his approach to painting in contradistinction to the prevailing trends of the era—first with Pop Art and later Neo Expressionism. Despite painting being declared 'dead' by Minimalist and Conceptual artists of the time, Quaytman maintained a commitment to the medium and to his vision throughout, helping to shape an alternate trajectory for American painting.

The artist’s work in the ‘70s developed into shield-like forms that balance on curved platforms, conjuring a motion that would result in a critic calling them 'rocking rectangles'—the body of work later known simply as 'rocker' paintings. These eccentrically shaped works were hand-crafted (he would steam and bend the wooden stretchers himself), and inherently related to movement—inspired by Islamic calligraphy, rocking chairs, and the flight patterns of airplanes and birds. His experiments with shape continued in the late ‘70s, and through the manipulation of geometric intersections and overlapping forms that all the while imply motion, a unique group of paintings resembling anchors or pendulums emerged. In the 1980s, Quaytman began his cruciform paintings, investigations of the cross shape not as emblem but as two meeting vectors; Constructivist, perpendicular geometric compositions that focused on the reduced palette of black, white, red, rusted iron, and metallic gold. While these paintings represented a stark departure from his previous work, Quaytman continued to pursue visual movement as he conjured an interplay of symmetry and asymmetry.

As his paintings evolved in form and shape, variously touching upon Abstract Expressionism, Minimalism, Process Art, and Constructivism, Quaytman simultaneously developed a rigorous practice of experimentation with pigment. He was interested in the history, alchemy, and chromatic effects of colour, seeking out unique tonalities at specialty stores at home and abroad, becoming a master of colour and texture. He skilfully poured paint, spreading Rhoplex over canvas with broad wallpaper brushes after dusting it with pure pigment that settled in thick, unpredictable strata. He later flecked canvas with glass or iron filings and used additives such as marble dust in paint he always mixed himself. On this subject, he said: 'It is very important to me to be reminded that I am not an alchemist but a man engaged in coded, layered conversation with my fellow man on what I hope to be (on another) level than words or music.'

Quaytman was a self-professed 'art soldier,' and as his artist daughter R.H. Quaytman has said, with 'the daydream soul of an aesthete.' The works on view here span the initial thirty years of the artist’s career, a body of work committed to modernist abstractions despite continual pronouncements of obsolescence, concerning both Modernism and painting itself.

Sign up to be among the first to know when new exhibitions by Harvey Quaytman or at Blum & Poe open.