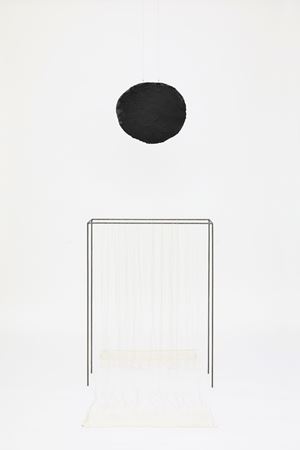 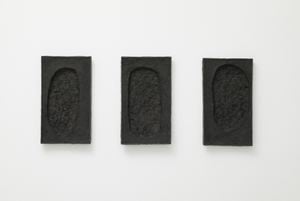 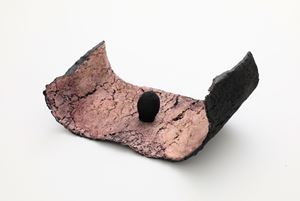 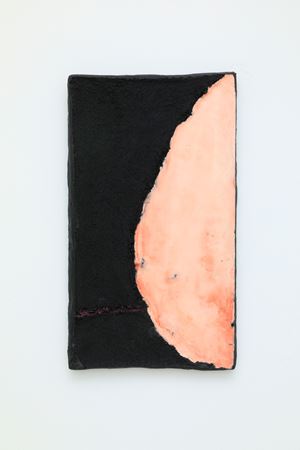 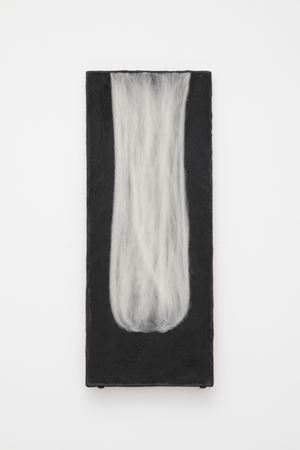 Dark Matter refers to a form of matter whose existence has been hypothesised since the beginning of the twentieth century but has never been empirically proven. It is thought to consist of elementary particles that hardly ever interact with other known forms of matter and also do not emit light, which makes them exceedingly hard to detect. Although the standard Lambda-CDM model of cosmology calculates that these particles constitute twenty-seven percent of the universe, there is little agreement on how to characterise them. Bosquê is interested in how the visible appearance of the world results from such immense, instantaneous and vibrant interactions among elements that are not readily perceptible—countless atoms in constant cycles of attraction, repulsion, fluctuation, and charge-shifting. Interactions occur in the empty spaces within atoms, in areas between one energy level and another. She has been searching for a horizontal approach towards matter as a means to connect this emptiness and enable a reciprocal relationship of transformation and exchange between herself and the material she forms into an artwork. Furthermore, Bosquê considers this approach to be a political position in terms of understanding the human being as a single actor negotiating and interacting with a myriad of other different, sometimes mysterious beings.

This exhibition presents a new body of wall and floor pieces, including freestanding compositions that incorporate hanging elements. In the wall-mounted 'Plates' series, images emerge from juxtapositions of matter. Their compositions originate in the fabrication of the structure, which combines galvanised wire mesh with cotton fibre with glue. The torsion, the removal of material, and the overlapping of different layers of vegetal fibre and everything else that compounds the image are at the same time the actual body of the work. The title of Sea Tube—a wall-mounted tube of dark cotton fibre—refers to a sound effect generated inside of the object due to a combination of its materiality with its form, reproducing the noise of the sea that one hears in shells. For Bosquê, its inner empty space is a potential channel of connection between different spaces and times. Black Sun consists of an irregular black circle hanging over a metallic structure overlaid by a thin tangle of golden lurex threads. The shape of the lurex yarn is dictated by the metal structure over which they are superimposed, imbuing them with a 'liquid' appearance. The round form hanging above serves as a centre of gravity within the composition, exerting magnetism, as if it were the element that pulls the wires upwards. This work rests in opposition to the 'black hole' where the structure of greatest gravitational force is on the ground bringing down the lurex wires. Through her practice of exploring and cultivating interchange between herself and the materials she composes into final forms, Bosquê’s work results from what she calls 'an agreement which could transform both of us, and the space surrounding us.'

Sign up to be among the first to know when new exhibitions by Paloma Bosquê or at Blum & Poe open.