Nathan Lyons is known for his honest and often questioning depictions of America’s cultural landscape. The artist has exerted a profound impact on the field of critical visual thinking for more than forty years. He is interested in the strategic juxtaposition of images that alter the meaning of the image itself, and create an open-ended space for dialogue. Lyons devises sequences of black and white pictures often mounted as diptychs, that incorporate signage, graffiti and advertisement in order to explore the use of language in imagery, form visual puns, or critically assess the American scene. The artist’s perception of the world as a vast repertoire of signs awaiting to be decrypted reflects the current changes taking place in contemporary society, where the written word is no longer dominant, and people are constantly surrounded by an image-driven environment.

Lyons was born in 1930 in Jamaica, New York. The artist has been a force for change in his roles as educator, curator, and author. He holds honorary Doctorates from Rhode Island School of Design and the Corcoran School of Arts, and Alfred University where he also earned his B.F.A. In 1969, he founded the prestigious Visual Studies Workshop in Rochester, New York, which he directed until 2001. Lyons has been the recipient of many distinguished honours throughout his career including the International Center of Photography’s Infinity Award for Lifetime Achievement in Photography in 2000 and National Endowment for the Arts Senior Fellowship in 1985. In 2006 he had his first major solo exhibition at Bruce Silverstein, followed by Return Your Mind to Its Upright Position in 2014.

Since the 1950s, he has exhibited widely in the United States and internationally at the George Eastman House, Rochester, New York; Houston Center for Photography, Texas; International Center of Photography, New York; Museum of Fine Arts, Houston, Texas; National Gallery of Canada, Ottawa; Centro Nacional de las Artes, Mexico City; and at the SICOF 10th International Exhibition at Milan, Italy among others.

He is the author of several important books and catalogs, including Persistence of Vision (1968), Photography in the 20th Century (1967), Towards a Social Landscape (1967), and Photographers on Photography (1966). 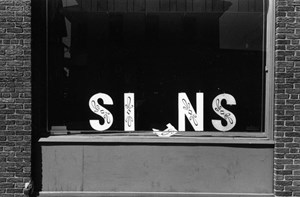