Joyce Pensato is best known for her painterly transformation of familiar pop figures into explosive, large-scale likenesses, rendered to seem simultaneously comedic and menacing. Her cast of characters includes Homer Simpson, Groucho Marx, Mickey Mouse, and a recurring character the artist called "The Juicer". Pensato draws dark and complex feelings out of these figures, expressed with furious brush strokes that leave the canvas full of drips and splashes. There is a rawness and vigour to her large, aggressive canvases and severe black and white palette. Her mutilated subjects appear larger than life, alive with boundless energy while seemingly looking down at the viewer. Pensato employed an exaggerated abstract expressionist technique, layering enamel paint with bold linear strokes and wild splatters. Her paintings, as well as her excursions into photography, drawing and sculpture, reveal the darkness lurking in pop iconography.

Pensato's work is included in the collections of the Museum of Modern Art, New York; San Francisco Museum of Modern Art; Dallas Museum of Art; Hammer Museum, Los Angeles; FRAC des Pays de la Loire, France, among others. She received the Robert de Niro Sr. Prize in 2013, the Award of Merit Medal for Painting from the American Academy of Arts and Letters in 2012, the Pollock-Krasner Foundation Award in 1997, and a Guggenheim Fellowship in 1996 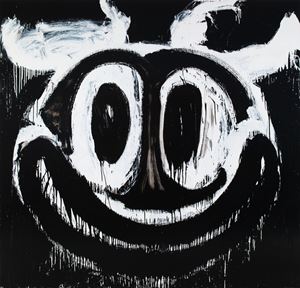