My practice as an artist is primarily in painting and abstract in nature. The work initially comes from an interest in science but as the activity of creating the painting takes place, the ideas become less important and the making is all-consuming. It's only through taking time out to reflect on what I have just made that the initial ideas may resurface for a period. I am interested in notions of order and chaos, which manifest in paintings that reference minimalism and abstract expressionism. Over the years, the grid as a form has featured within my personal lexicon. Historically, the use of the grid in art has made it arguably an iconic form.

Recently my scientific interests have shifted towards looking at the mechanisms of the universe. I like to think that the universe is loosely made up of an invisible grid structure that connects every existing particle, and that order and chaos can play out their roles within this. What lies in the space between two given objects within the universe? Visually there is nothing. Which leads me to the question, what is nothingness? Space is mainly a vacuum, which has a few particles of Helium and Hydrogen per cubic metre. In our universe, even a dark empty void of space absent of particles is still something. This may be what I'm thinking about in the build up to making a painting. Through using the grid and vertical lines with abstracted forms attached to them, I further develop and explore these thoughts. I see the forms as an infinite field of energy that travel on a journey of birth, formation and eventually destruction, only for the particles to be recycled and the process begin again. This, I like to think, happens throughout the universe.

In my recent paintings the forms are painted in white on different coloured backgrounds. The white is intended to show the invisible energy through an aura or halo of light. 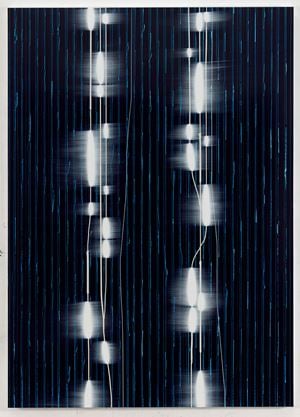 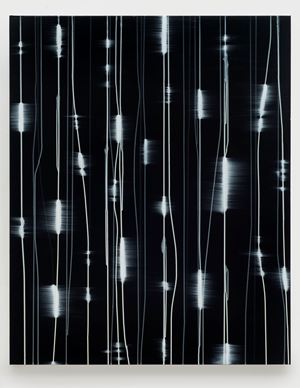 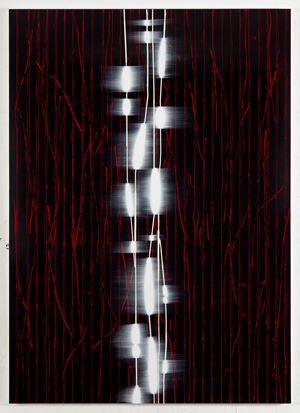