For his early Pool Portraits series, Roland Fischer placed his models in a swimming pool: free from any personal attributes and dissociated from their usual environments, they are instead immersed in the monochrome blue or deep black of the motionless water. This formal reductiveness turns the human faces into a surface for projections reflecting everything at once: distance and intimacy, insides and outsides, types and individuals. Fischer's conceptual approach is to juxtapose opposites, based on "the fundamental ambivalence of all things", as he says.

People and architecture are his main objects. For example, Fischer will turn the façades of buildings - mostly from global financial centres - into abstract graphical patterns (Façades series). Removed from their architectural contexts, the photographs thus incite an aesthetic examination of form and colour, image versus representation.

The New Architectures series also features works exploring the continuum between abstraction and figuration. Here, Fischer approaches modern architecture with a compositional technique borrowed from cubism, superimposing and blending images from various perspectives to create multidimensional realms of visual experience - New Architectures that express the psychology of a given space.

The artist goes one step further in his most recent series, Transhistorical Places, in which he overlays fragments of, brutalist concrete architecture with forms reminiscent of 20th-century abstract painting. The result is a new, almost surreal photographic space that not only melts the boundaries between image and representation, architecture and painting, but also between two different modernist art movements with all their connotations virtually an expression of the current times. In these visual 'time-space collages', Fischer prompts the observer's perspective to oscillate.

Roland Fischer is an internationally acclaimed artist whose work has already been shown in over 120 museums and art institutions worldwide, among them more than 40 solo exhibitions, including the Pinakothek der Moderne in Munich and the Musée d'art Moderne in Paris. His work is featured in numerous international collections. 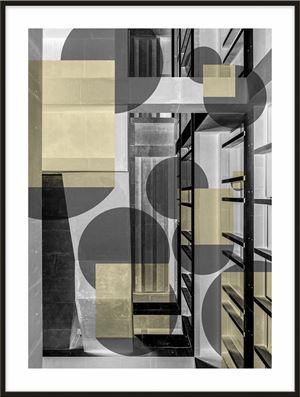 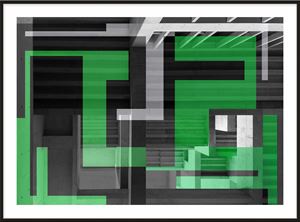