Geer van Velde was born in Lisse, in the Netherlands, to a family of modest means. Like his brother Bram he started work at an early age at the high-class painting and decorating firm of Schaijk & Kramers. During his spare time the young Geer drew and painted, making astonishing progress. Aware of the two brothers' talents, Kramers encouraged them in their artistic careers by providing them with financial assistance, at least until the Great Crash of 1929. In 1925, Geer left for Paris, where his brother had moved some years before. His early career was difficult, and he was very short of money, but he succeeded nonetheless in establishing himself in Montparnasse, where he met Elisabeth Jokl, whom he would marry in 1933.

A first, academic, period was followed by another more Fauvist and Expressionist in spirit, but the year 1939 marked a fundamental change in Geer van Velde's practice as a painter. An enthusiast for Webern and for the work of Lao-Tzu, he sought to develop an art that reflected his 'inner world', a painting that invited to contemplation and silence. Assimilation of the lessons of the Section d'Or group led in 1948 to the work of the so-called 'Ateliers' period, followed in the Fifties by the 'Intérieurs', the whole development representing a gradual detachment from the real.

In 1944, the painter moved to Cachan, where he would spend the rest of his life. Marked by an oscillation between figuration and abstraction, the period that followed proved enormously fruitful. The work was characterised by a subdued palette, the colour seemingly veiled, almost extinguished, dominated by shades of mauve and of grey-blue that recalled the light of his childhood, the landscapes of his northerly birthplace still being very present to his memory. Indeed, he regularly made short visits home.

The space of his compositions was often organized into geometrical forms–squares, diamonds, triangles–all treated with the minutest care. Slowness was a virtue. Disinclined to speak of his art, he nonetheless confessed to engaging in a real 'struggle' with the canvas, attacking it only when the idea had completely taken form. In the late 1950s, he aligned himself with the new Ecole de Paris, practicing with great delicacy a form of post-Cubist abstraction in shades of grey.

While Geer van Velde had exhibited regularly since first showing at the Salon des Artistes Indépendants in 1928, the growing reputation this brought him had not been matched by commercial success. A show in London in 1945 supported by Peggy Guggenheim brought international visibility. After an exhibition at the Kootz Gallery in New York in 1948, he began to show all over the world, with many exhibitions in Germany, Switzerland, Italy and Sweden, as well as appearances in Brazil at the biennales of Rio de Janeiro and Sao Paulo.

A solitary, taciturn figure, Geer van Velde produced a reflective and analytic body of work that never falls into the cerebral, his masterly control of anxiety allowing him to conjure up on the canvas an inner world of harmony and serenity. 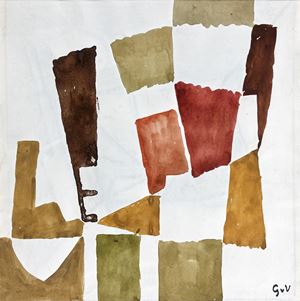 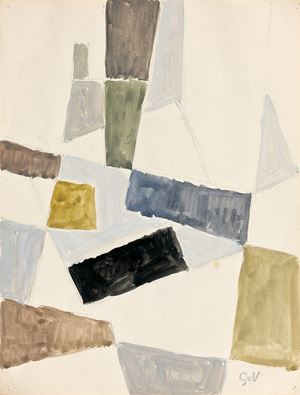