In 1905, Ossip Zadkine was sent to the north of England to study with his mother's family. There he attended the town's Art School, while John Lestec, a cousin of his mother's, introduced him to ornamental sculpture. In 1906, without his parents' consent, he went to London to attend evening classes at Regent Street Polytechnic, while doing small ornamental carving jobs. His interest in sculpture was sparked by his visits to the British Museum in London. In 1908, back in Russia, he made his first sculptures. In 1909, he moved to Paris where he joined the School of Fine Arts and became passionate about Rodin's work. From 1911, he settled in La Ruche and regularly exhibited his drawings and sculptures at the Salon d'Automne and the Salon des Indépendants. While studying antique sculpture at the Louvre in particular, he meets artists such as Delaunay, Apollinaire, Lipchitz, Survage, or Picasso and Brancusi who will greatly influence him in his future works. He will share their taste for the purity and clarity of forms present in primitive art. His sculpture evolves towards a liberation from gravity in which formal representation gives way to the expression of feelings. He gets this emotional and poetic dimension from observing Rodin's work. Between 1914 and 1915 he exhibited in Berlin at the Freie Session, in Amsterdam at the De Onafhankelijken and in London at the Allied Artists Association, and a friendship was born from his meeting with Modigliani. 1915 marked a halt in his career as Zadkine voluntarily enlisted as a soldier to defend his new homeland (he was not naturalised until 1921).

He was gassed in December 1916 and was discharged the following year. In 1919, Zadkine met Valentine Prax, a young woman painter who became his wife in 1920, with the Fujita family as witnesses. In 1920 he had his first solo exhibition in Paris. In 1928, he set up his apartments and studio on rue d'Assas, which would become the Zadkine Museum after his wife's death in 1981. During the Second World War, he goes to the United States where he gives lessons at the Arts Students League and exhibits in the Wildenstein gallery. When he returned to France in 1945, his fame was such that he was the subject of many exhibitions, including a retrospective at the Musée d'Art Moderne de la Ville de Paris in 1949, and received many awards such as the Grand Prix de la Sculpture at the Venice Biennale.

in 1950. His work as a sculptor is punctuated by the graphic arts. At the end of the war in 1918, Zadkine, morally and physically exhausted, was invited to Bruniquel, a small village between the Tarn and the Garonne, by his painter friend Henry Ramey. There, in contact with nature, a return to life and creation took place for him. Zadkine paints there a set of gouaches and watercolours of landscapes of cubist inspiration which marks the beginning of his graphic work. 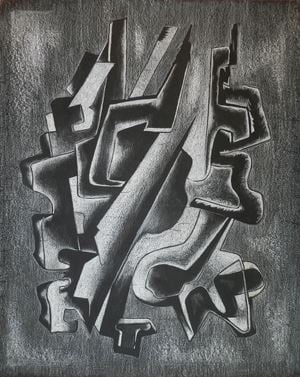 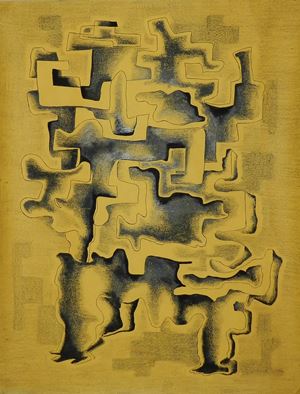