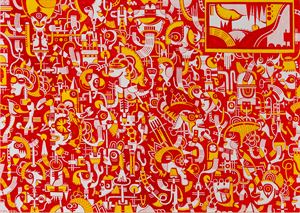 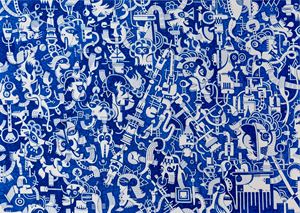 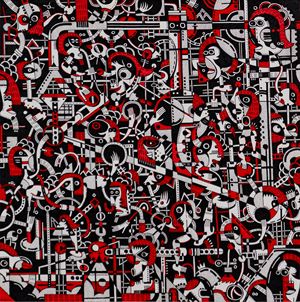 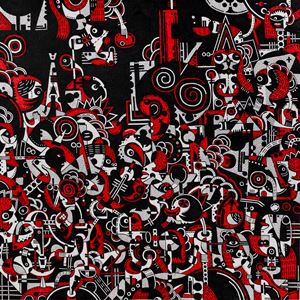 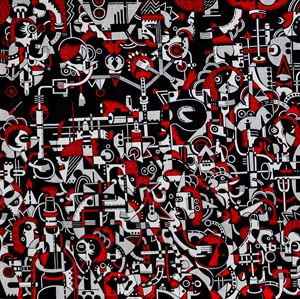 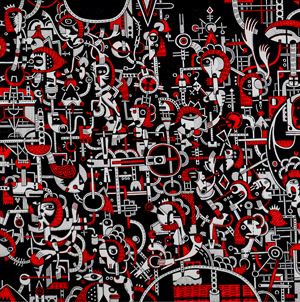 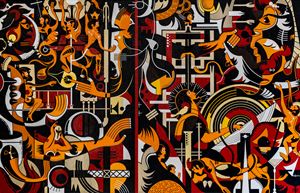 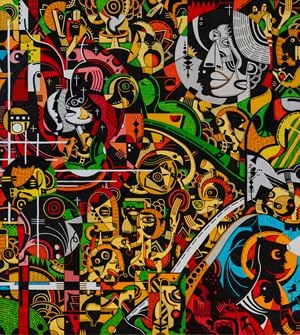 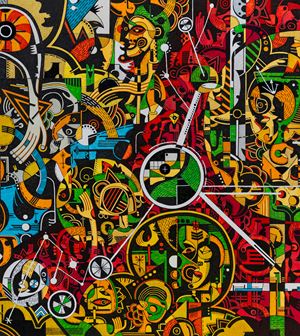 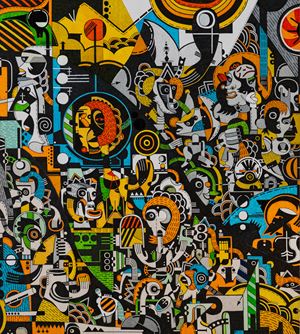 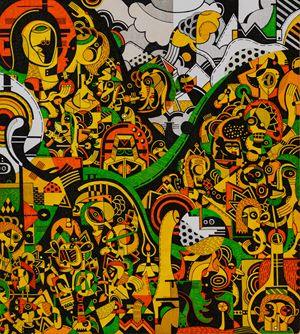 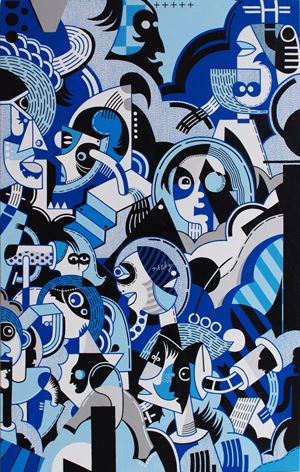 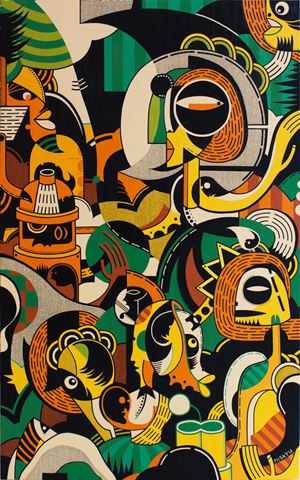 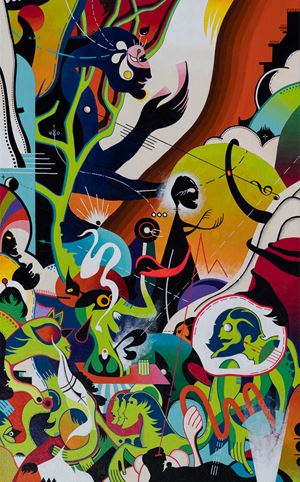 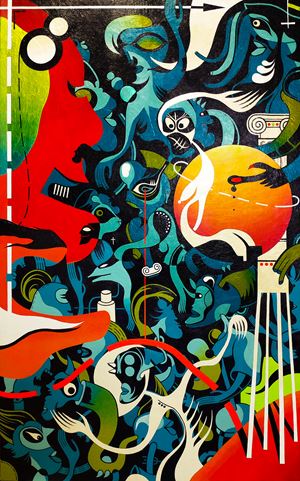 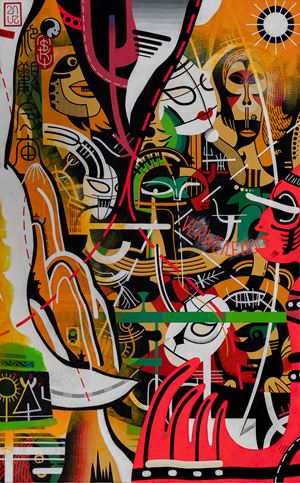 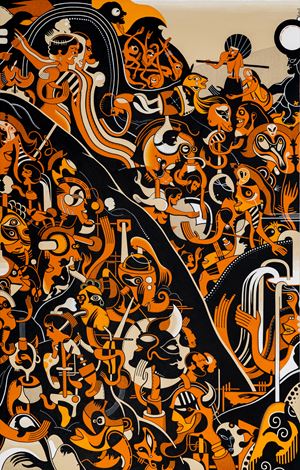 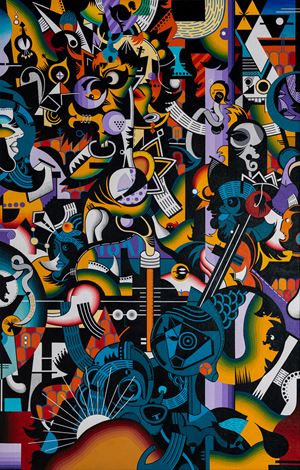 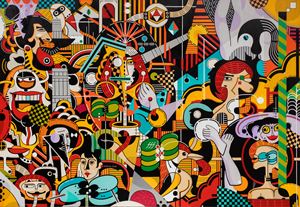 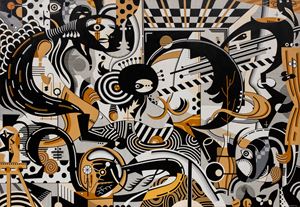 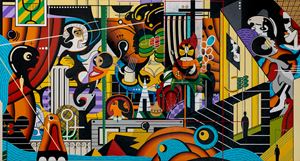 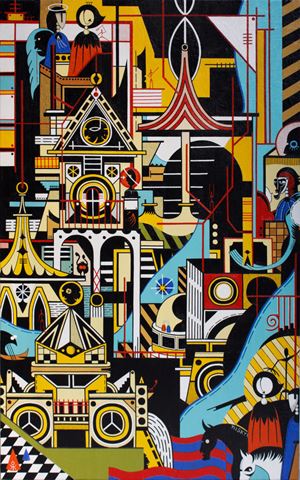 Galerie Dumonteil is delighted to present NISKY, the eponymous show of local artist Nisky Yu. Featuring more than 20 recent paintings and drawings, the exhibition deciphers the artist's multi-dimensional space composed of fine arts, music, literature, and movies, among other fields. Through the guidance of poem extracts, on-site improvisation, and Nisky's original music on-demand, it invites the audience to experience a unique audio-visual journey that explores the mind and the self, reality and imagination.

Metacollage is a notion that Nisky has established since his solo exhibition Phosphenes in 2017. It is a new concept evolved from the artist's practice on canvas—an attempt to form a 'superior unit' between two or multiple art forms from varied cultural backgrounds based on the 'syntactic structure' of different materials. If 'collage' is a physical formation, then 'Metacollage' is a series of chemical reactions that break and reorganise all the participating elements to attain an ultimate 'osmosis'.

The exhibition brings together a selection of Nisky's most recent practice based on this concept. Each piece reflects the artist's unique approach to multicultural integration and painting style adaptation. For instance, the 'Surfer Rococo' series embraces the idea of cultural fusion under the retro tone. 'Surfer' represents Nisky's fascination with popular culture in the 1950s and 1960s, while 'Rococo—aside from the misunderstandings and prejudices caused by its grandiose and extravagant visual presentation—is considered, by Nisky, a critical source of the beauty of fusion, especially the 'chinoiserie' that flourished in the European court at that time. To Nisky, though the 'chinoiserie' under the Western perspective carries all kinds of 'misreading', they are full of creativity, and they can be regarded as a new perspective when appreciating the beauty of Chinese culture.

In terms of the use of painting styles, taking Our Ancestors: Landscape Ensemble I as an example, the work is guided by black-figure, red-figure, and white figure techniques—painting techniques that evolved during the three periods of the ancient Greek bottle painting. The specific characters are further depicted by inspirations from the Han Dynasty portrait stones, Peking opera masks, and African woodcarvings. At the same time, the narrative of the picture is established with the help of mountain shapes in landscape paintings. The artist opts for materials that are rich in contradictions and struggles, thus revisiting traditions while moving forward.

The Synthesis of Painting and Music

The exhibition preserves the unique musicality and theatricality among Nisky's works. In Micro-Symphony No˚1, colour performs the carrier of the melody, characters as notes or phrases, and composition as variations and echoes of the movements, making the ups and downs of the four movements alive on paper. The same kind of 'visible melody' can also be found in Overlapped Aspects I&II and Glassia II: Outsiders. Overlapped Aspects I&II pictures a surreal scene of psychedelic and electronic music—the overflowing colour and rhythm are amplified by the interweaving of various creatures of imagination and Nisky's unique note bouquets. Glassia II: Outsiders continues the narrative style of Glassia I: Farewell and fancies 'watching' and 'being watched' in the jazz era.

In the past two years, Nisky carried out his painting and music creations simultaneously. The insights gained through music production has influenced and reshaped Nisky's understanding of visual art. An accidental composing experience allowed Nisky to obtain a more relaxed creative state, as opposed to his usual structural methodology. Later he applied this kind of 'following the beats' production method to his painting creation, which enables him to experiment more freely on different painting methods. Incorporating the 1980s nostalgic state of current young people in China, The Broken Mephisto, 1980s Dream in Shinjuku, and Joys on the Beach are the first set of the practice of this 'chillaxed' style.

The musical influence also brings about the change in dimensions along with composition arrangements. The artist disregarded his preference for large-scale works and turned to combinations of smaller pieces. 'The truly memorable part of a song often ties to its chorus or part of the verses—a small part of the whole song, so I want to try something similar to my paintings.' After making them as small as 'the core size' without changing the usual density of the narrative, the artist encourages new conversations through the arrangements "string quartet", in which players sit in a half-circle, and the strings respond to each other.' An excellent example of this idea would be the three sets of works on paper on the left-side wall by the entrance—a set of overtures, symphonies, and variations with the theme of Alcheringa.

Behind Nisky's cross-field and cross-cultural Metacollage creations are the artist's deep understanding of art inclusiveness and his unremitting exploration of the possibility of painting with his broad interests and vast knowledge. Let us approach the inner world of Nisky Yu through NISKY.

Sign up to be among the first to know when new exhibitions by Nisky Yu or at Galerie Dumonteil open.