Interested in the emancipatory possibilities of modernist abstraction, Austrian artist Ulrike Müller is known for painted works which explore body and identity politics.

Born in 1971 in Brixlegg, Austria, Ulrike Müller studied painting at the Academy of Fine Arts Vienna, and the University of Applied Arts Vienna, after which she attended the Whitney Museum Independent Study Program and the MoMA PS1 studio program in New York. In 2005, Müller joined the feminist genderqueer collective LTTR, which aims to 'celebrate feminist art' and 'unite people together'. Müller is an editor for the organisation's eponymous journal, and regularly lends a hand for events and exhibitions.

Ulrike Müller works across a range of mediums including drawing, wall painting and vitreous enamel. Common motifs in her work include linear abstractions, flat shapes, shoes, and flowers. Müller began incorporating the latter to overcome assumptions associated with modernism and gender, showing that art need not be confined to a single interpretation.

Müller's exploration of physical identity often carries over to the deconstructions of space. Her 2016 solo exhibition And Then Some at Callicoon Fine Arts in New York featured rugs, drawings, enamel works depicting semi-recognisable icons, and a wall painting that seemed to extend the grey colour of the gallery's floors until it crept up onto the walls. For the 2018 exhibition Container at Kunstverein Dusseldorf, Müller again painted the gallery's walls grey to create a three-dimensional pictorial space.

Accordingly, Müller's spatial alterations extend into installation. Exhibited at the Kunsthaus Bregenz in Austria and the Brooklyn Museum in 2012, Herstory Invention was made in response to Judy Chicago's feminist installation The Dinner Party (1974–79), in which 39 place settings paid homage to historical and mythical female figures. For the exhibition, Müller invited feminists, queer artists and other 'interested New Yorkers' to make objects inspired by quotes on t-shirts from the Lesbian Herstory Archives in Brooklyn.

Ulrike Müller was the recipient of the 2020 Prize of the Böttcherstraße in Bremen.

Ulrike Müller lives and works in Brooklyn, New York. She is co-chair of painting at the Milton Avery Graduate School of the Arts at Bard College in New York, where she also teaches.

Ulrike Müller is represented by MEYER*KAINER in Vienna. 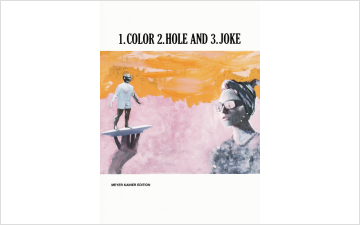