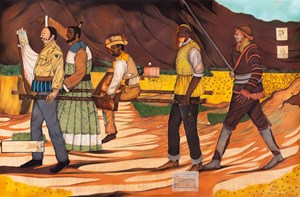 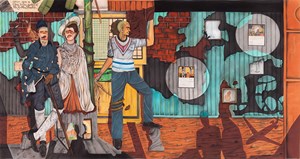 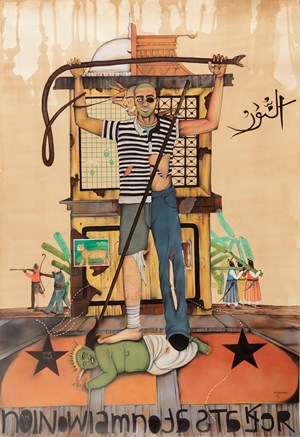 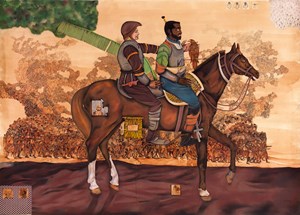 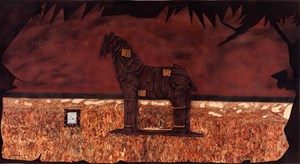 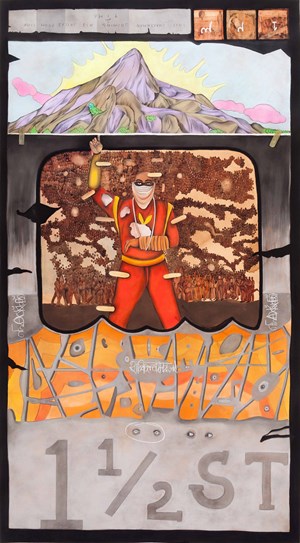 Abul HishamUntitled, 2014Pastel, watercolour & charcoal on paper
213 x 122 cm Galerie Mirchandani + Steinruecke Contact Gallery
View More Works By This Artist
Abul Hisham’s works depict absurd, seemingly comic scenes that have a staged quality about them.  The figures appear remote, placed within a picturesque spectacle. The painter reveals himself as an observer and storyteller. He extracts references and characters both from his immediate surroundings as well as from art history, mythology and religion, the cinema and popular culture.

The exhibition ABUL HISHAM – NEW WORKS at Galerie Mirchandani + Steinruecke, presents a suite of ‘miniature’ paintings with collage on printed paper, together with nine large format mixed media works.  In the large works – which are a combination of painting, drawing and collage – the colours are rich and jewel-toned, even if they depict scenes of ravage.

Abul’s scenes speak frequently of his native India, but often the inhabitants are from elsewhere. The exploration of shared histories, and of hierarchy and power, have been starting points for his work.  Earlier works were more obvious, with their symbols of state control mechanisms.  Now, the iconography has become more subtle. For example, the Trojan horse or the Scales of Justice, gestures of suppression or triumph, function as metaphors in elaborate settings. The artist situates his works in the field of socio-political occurrence, describing his paintings as portrayals of perceived reality. “Most of the works begin in one of two ways”, he says. “As a reaction to some particular action of society, or to express different emotions through a personal mythology. Most of the time the idea of a work approaches me, rather than my searching for it. I believe in that point of time."

Today the political in art is often taken for granted, art considered by its political relevance. Do art and politics share a love-hate relationship?  Abul suggests that on the one hand, customized portraits of rulers and their magnificent examples of architecture and monuments are made by artists, and on the other, political art stems from the acts of these very figures.   He does not, however, impose upon the viewer, any straightforward reading of his images. Despite their stylistic realism and richness of networks, the formulation of a black-and-white opinion is consistently negated.

As with epic theatre, Abul adds to his stage of characters, an effect of refraction and alienation. Through their specific outlines, the figures assume cartoonish and stereotypical traits.  Collage and satirical elements further mock an immersive effect. With this approach Abul creates a necessary distance that allows the viewer to decipher the many metaphors and symbols for themselves – be they mythological, religious, political, media-driven or personal.

Born 1987 in Thrissur, Kerala, Abul Hisham attained a BFA in Painting at the Government College of Fine Arts in Thrissur and an MFA in Painting at the Sarojini Naidu School of Arts & Communication, University of Hyderabad.  His first solo exhibition was held at Kashi Art Gallery, Kochi, in 2010.  Abul Hisham is a recipient of the Inlaks Fine Arts Award, 2013.  He lives in Hyderabad.

Sign up to be among the first to know when new exhibitions by Abul Hisham or at Galerie Mirchandani + Steinruecke open.