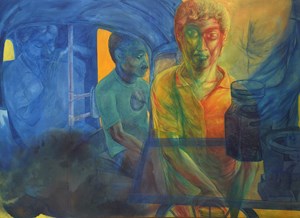 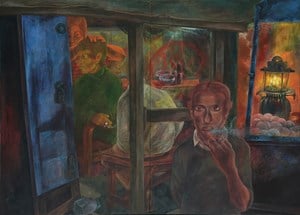 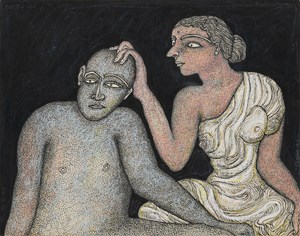 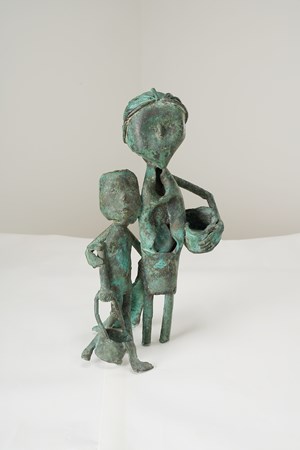 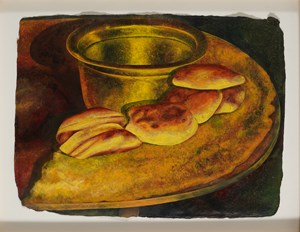 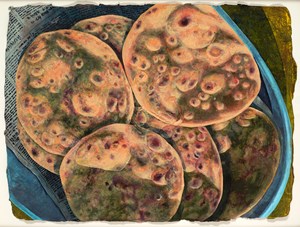 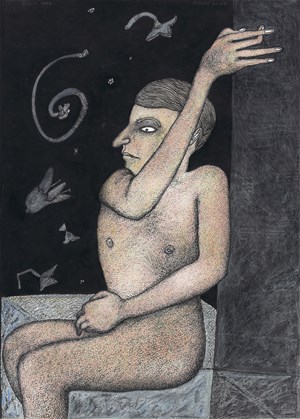 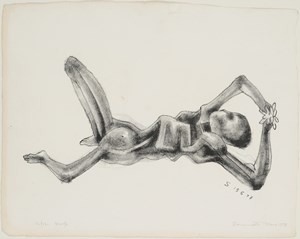 Somnath Hore was born in Chittagong, now in Bangladesh. He held several posts – as Lecturer at the Indian College of Art and Draftsmanship in Kolkata, as Visiting Faculty at the M.S. University in Baroda, and as Head of the Graphic Art Department at Kala Bhavan, Visva Bharati University in Santiniketan. He took his Diploma in Fine Arts from the Government College of Arts and Craft in Calcutta in 1957, as an external candidate. Pranab Ranjan Ray writes, "Somnath, along with a few others, can be regarded as the progenitor of the main spirit of the seventies in Indian art." Ray goes on to speak about the expressivity of Hore's work, which stemmed from the "wounded humanity" that the artist first experienced as a young man of twenty-two, during the man-made Bengal famine of 1943. Somnath Hore's drawings, watercolours and prints shed detail. Whether his figures are seated, lying down or doubled over, there is an indelible mark of pain. Hore was well past fifty when for the first time he began to make sculpture. Made in cast metal, this was the final medium he worked in. He passed away in 2006 in Santiniketan.

"There is a streak of voyeurism in Jogen's work regarding his own social class and its sexuality. Relationships are observed and critiqued sympathetically...", writes Geeta Kapur in an essay on Jogen Chowdhury, published in 1999. Chowdhury studied at the College of Art in Kolkata. In 1965 he moved to Paris on a French Government Scholarship to study at L'Ecole Nationale Superieure des Beaux-Arts and Atelier 17 of William Hayter. On his return to India, he found great potential in the Bengal patas – not just their linear quality, but the distortions, their frozen quality and ornamentation. He was also drawn to the folk theatre of Bengal. "It is ingenious of Jogen to have devised a medium that is between drawing and painting. Avoiding the ubiquitous use of transparent watercolour in the recent Bengal tradition, and not satisfied with only the graphic aspect of the image, he started to build up another kind of surface. He worked on paper with pen and ink and the drawing came to be blended with layers of soft dry pastel", writes Kapur. Jogen Chowdhury lives and works in Kolkata and Santiniketan.

Sunil Das was born in Calcutta. He studied at the Government College of Art and Craft in Calcutta, and subsequently on a French Government Scholarship at L'Ecole Nationale Superieure des Beaux-Arts and William Hayter's Atelier 17 in Paris. Sunil Das emerged on the Indian art scene as a painter with an astonishing repertoire of technical and formal capabilities. Never working with photographs or models, Das used to sketch before starting a painting, orchestrating colour and form until they fell into place. His paintings were also inspired by his study of sculpture in Santiniketan, and his study of graphic art in Paris. Many of his paintings of women speak of the pressures they are subject to. "I delve into man's inhumanity to man", he had said.

Born to a French mother and a Bengali father, Chittrovanu Mazumdar studied Painting at the Government College of Art and Craft, Calcutta. Kamala Kapoor writes of his work, "Colour functions both emotively and structurally, taking over as the painting's chief protagonist, while the loosely painted forms shift and arch or plunge and dribble, bringing out contours, fields of pattern and receding and advancing shapes." She continues, "Occasionally, off-handed scraps of representation appear: a fully formed face stares back from a splash of paint. Sometimes it's a recall from an old woodcut, a Kalighat pat or facets of the many splendoured Goddess Kali. There is little doubt that these well up from some deep subjective vulnerability. The Bengali ethos is certainly a part of it." Chittrovanu Mazumdar lives and works in Kolkata.

JAYASHREE CHAKRAVARTY (b. 1956 in Tripura)

After completing her education in India (in Santiniketan and in Baroda), Jayashree Chakravarty moved to France as an artist-in-residence at the Ecole d'Art, Aix-en-Provence. Painted during the years she lived there, Untitled, 1994, is rendered in an overlay of wintery whites and blue-greys, with under-layers of deeper colours. Inscriptions in Bengali are visible on the painted surface. These paintings, says the artist, are like a personal diary of her days in France. Ranjit Hoskote relates the sign-covered surfaces of Chakravarty's work, to the drawings and paintings of some of the masters of the Santiniketan movement. "Sumptuously painted over with signs and notations, Chakravarty's works are readable as surfaces bearing directions, instructions, symptoms and clues: the eye catches a cloud here, a road sign there, an evocation of landscape, a flickering pattern....", writes Hoskote. The artist lives and works in Kolkata.

"Radha Binode Sharma's work is at first glance deceptively simple, with its understandable forms gradually unravelling a sense of everyday life and living within descriptive compositions. Despite the radiance of warm colours and luxurious moments flaming through vaporous, caressing brushstrokes, no one will be able to dismiss the under-written sense of anxiety, that in fact is the leitmotif of the work," writes Kamala Kapoor. Radha Binode Sharma has a Diploma in Painting from Visva Bharati University, Santiniketan, and a Post Diploma from M.S. University, Baroda. He is a recipient of the Elizabeth Greenshields Grant, Canada, and the Delfina Studios Fellowship, London. He lives and works in London.

14 new artworks have recently been added by Galerie Mirchandani + Steinruecke.
Sign up now to be among the first to know when new artworks are added.