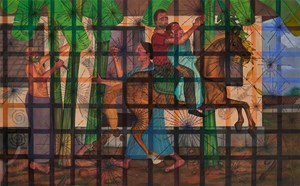 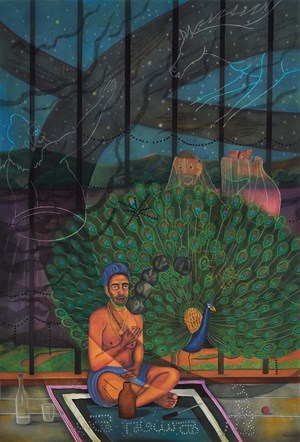 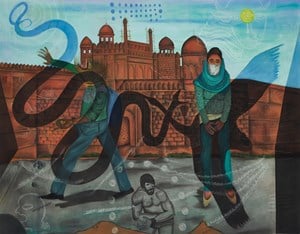 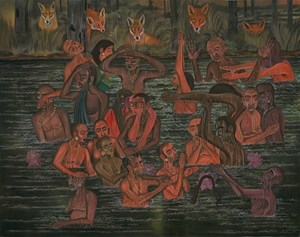 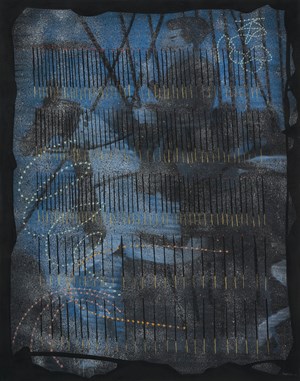 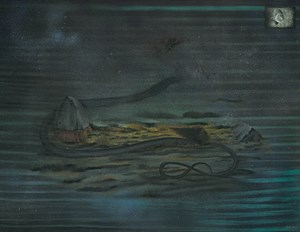 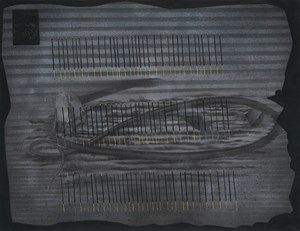 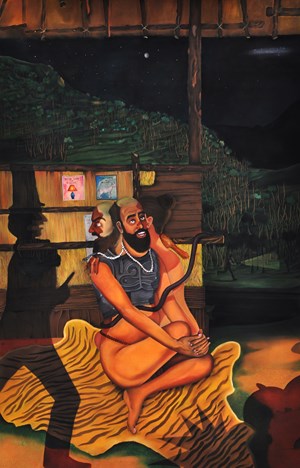 Galerie Mirchandani + Steinruecke is delighted to present Recitation, Abul Hisham's second solo exhibition at the gallery. A recitation is a repetition of what is known, of what already inhabits the body and finds release. To recite is to create an opening for epiphanies in the present, to infuse the ordinary with clues for repair and redemption. The framework of recitation provides a point of entry into this exhibition, which comprises eight large-scale and seven small-format works made using soft pastel and charcoal on paper.

Taking off from myth, fable, and scripture, and borrowing elements from miniatures, Ajanta murals, and popular art, Hisham's paintings depict archetypal characters in the midst of heightened states of contemplation and churning. The artist arrests their quests in a precise manner, emphasising ambiguity rather than the certainty of outcome we may expect from a familiar tale. Within settings of domestic interaction and ritual performance, these otherwise ordinary individuals appear to be caught in moments of spiritual longing.

We see the protagonist of Complaining Man II, mouth agape, holding a pearl between his fingers, having threaded white globules into the Malayalam words nale, innale, innu (tomorrow, yesterday, today). Behind him, a portly saint from a children's book summons a horse, and two veiled men scream in agony. Stones levitate, and a screwdriver follows suit, while a ball, a glass, and a bottle, and their respective shadows, remain rooted to the ground. The Arabic words algharur for ego and raghbat for desire, written over and over again, provide context for the man's quest.

Throughout the exhibition, certain motifs repeat across several paintings, and through them unexpected associations are established between disparate locations. Snakes, pearls, incense sticks, and Arabic text find their way into places like the courtyard of a home, a sadhu's tent by a hillside, the site of a grave, the environs of a fort, and a river in which devotees are bathing. These recurrent motifs become vehicles of haunting, and in their persistence raise questions about parallel planes, reality and illusion. Their inconspicuous echoes and uncanny incongruity destabilise all sense of time and place.

Along with the vast repository of ideas and icons that are available to Hisham through this training in art and his consumption of popular culture, there is also another world of moral tales, legends, and texts that he has access to owing to his study of Islam. The Recitation series, from which this show takes its title, featuring a snake slithering on a grave, alludes to a type of punishment meted out to the dead before Judgement Day according to certain schools of Islamic belief. In Recitation 5, Hisham paints rows of incense sticks over the grave, transforming objects otherwise used for rituals and worship into the blocks of an incomplete grid.

The artist's interest in the existential finds expression in the medium of dry pastel, which he has been using over the last decade. The experience of working with the powdered pigment is like sculpting from dust, and recalls the Christian and Islamic belief that humans were created from dust to which they return after death. Some of the pastel pigments that Hisham uses are made from mined minerals, themselves part of the cycle of creation and transformation over millennia.

In Recitation, Hisham's confident quotations from varied textual and visual sources demonstrate his agility as a painter, and his sense of humour within the serious task of translating texts and images accrued as cultural heritage for this contemporary moment. The sinister and mysterious worlds he creates, which are governed by the kind of extraordinary forces that have inhabited the imaginations of great storytellers, bring together an artistic interest in form with lived experiences of tradition.

Excerpted from the exhibition essay by Zeenat Nagree

Sign up to be among the first to know when new exhibitions by Abul Hisham or at Galerie Mirchandani + Steinruecke open.