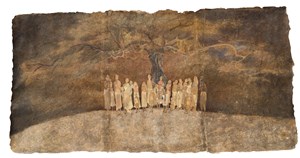 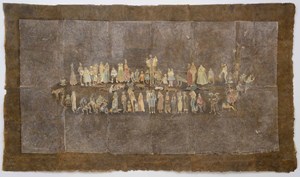 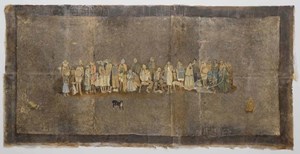 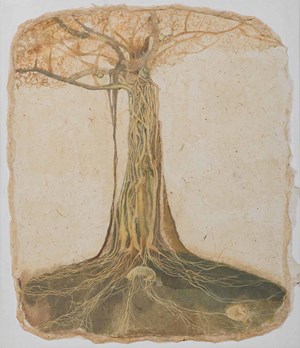 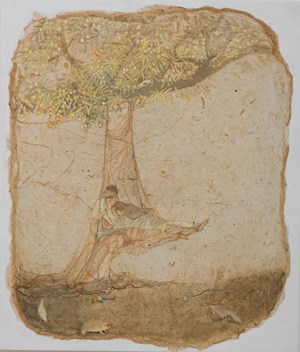 Stark in their contrast to wildly gestural painting styles, Siji Krishnan's watercolours captivate the beholder with their sensitivity, yielding delicate and detailed scenarios evolving around the single human being and the intricate network of relationships in which it is embedded. Here, Krishnan seeks inherited tradition, her method being one of introspection, her subject matter based on experiences and memories anchored firmly in both personal and common knowledge.

A trademark of her craft, Krishnan uses sheets of rice paper of different textures, which she layers, building up a thickness that absorbs the numerous washings with lighter and darker shades of watercolour. In her recent works, Krishnan employs a reduced, monotone palette, achieving greater overall transparency, endowing her images with an ethereal, light quality. The singular patina of the surface can sometimes be compared with organic material such as dried leaves – but also bears the semblance of vintage textiles or ancient parchment. An impression of timelessness is thus inscribed in the very medium of Krishnan ́s painting, coming into being by means of a traditional technique. Forms and figures seem to emerge from the shadowy depths of these carefully applied strata, fading in and out of the fibrous background.

The theme of human interdependence becomes explicit in numerous portraits, featuring groups such as school classes, families, or even freaks. These are joined by a likeness of age and educational level, genealogical ties, or the shared burden of disability, respectively. Krishnan's exquisitely elaborated depictions comprise arrangements in which the figures are positioned like a set of actors on a theatre stage. Such panoramic displays often extend across formats measuring up to nearly 5 meters, and recalling a comprehensive theatrum mundi, in which the world ́s diversity is put on show and exemplified.

The scenarios presented in the family portraits show lively get-togethers of generations, from infancy, youth, adulthood and old age. Each member of the group is characterized through the bearing of props or attributes, and engaged in a particular activity, often involving others. Working with great delicacy and commitment to her subjects, Krishnan takes utmost care in exploring a rich variety of human forms and conditions. Different roles or positions of the individual within a collective context are visualized, moments of isolation and dynamic interaction alternating. Much as her protagonists are engaged in earthly tasks, an aura of alienation surrounds them.

Krishnan ́s examination of human existence seems to reflect on both the uniqueness of each being and the universality of life, showing itself in processes like birth and death, linking all humankind. The concept of family as well as other types of affiliation referred to in Krishnan ́s works are symptomatic of a superordinate classification scheme and symbolize a greater network, of which each single being is a part, and in which past and present are in eternal transition.

Born 1983 in Mavelikkara, Kerala, Siji Krishnan attained a BFA from the Raja Ravi Varma College of Fine Arts, University of Kerala, and an MFA from the S.N. School of Fine Arts, Central University of Hyderabad. She has held solo exhibitions at Kashi Art Gallery, Kochi, Kerala, and Galerie Mirchandani + Steinruecke, Mumbai. In 2012 her works were shown at the Kochi-Muziris Biennale in Kochi. Siji Krishnan lives and works in Kochi.

Sign up to be among the first to know when new exhibitions by Siji Krishnan or at Galerie Mirchandani + Steinruecke open.