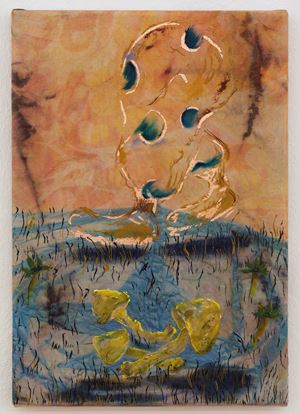 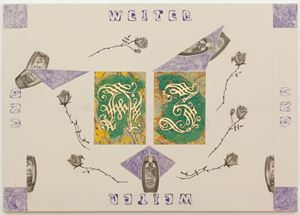 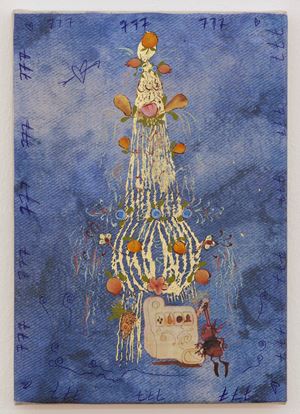 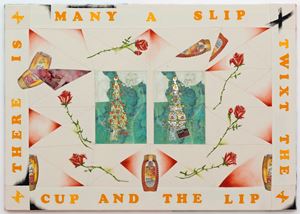 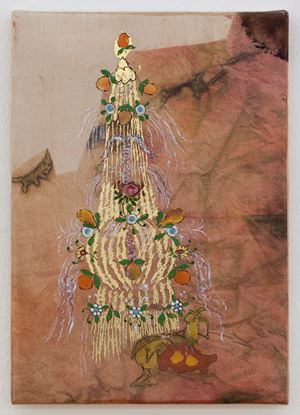 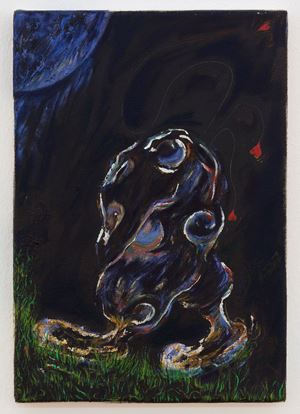 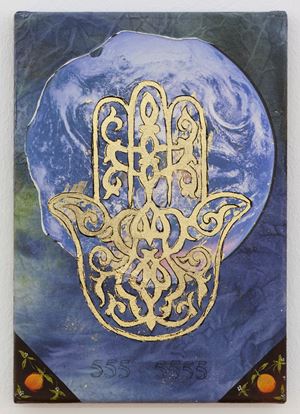 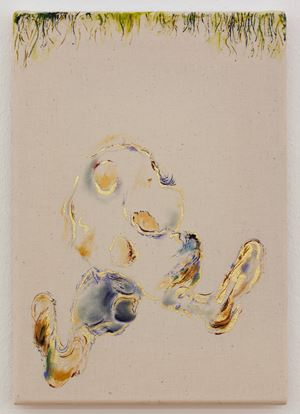 In Elif Saydam's exhibition Everybody's Fool at Galerie Rüdiger Schöttle, viewers are thrown into a world in which Ottoman miniature painting is confronted with the Western figure of the fool at very close quarters.
While the DIN-A4-format oil paintings open up a cosmos of Eastern ornaments and fragmentary bodies, the large-format works resort to harlequin costumes. The two work series operate on different technical levels: Photographs—or textile scans ironed onto canvases—become the first layer of Saydam's works. The artist subsequently employs the method of traditional oil painting and superimposes it with a collage technique, using gilding devices—mainly 23-karat gold leaf.

Popping up time and again are the contours of a figure tottering through the frame with giant feet. Everybody's Fool—that is the title of the exhibition, and it's this fool who is the recurring motif in Elif Saydam's works. Yet he is only hinted at in fragments. In the 2019 work Fancy Fool, he appears as a hybrid creature—looking at the viewer with mischief. The element of irony is emphasised by the Dadaist use of saccharine, paradisiacal symbols: Roses or pomegranates serve as placeholders for eyes through which an unfamiliar world of fruits and phantasmagorical figures is created. At the same time, it is the opposites—reinforced by the ironing technique and the gold leaf—that cause confusion.

Throughout cultural history, one usually encounters the commedia dell'arte figure of the harlequin as being of lower-class origin, standing on a large stage in tattered clothes or entertaining audiences at masquerade festivities with a wittily naïve comportment. Saydam uses this potential to their advantage. Their humouristic portrayals visualise a cosmos of images from the East and the West, of symbols from today's visual culture. The technical divergences encompass a class politics of good taste and call it into question in the same breath.

Viewers versed in astrology are familiar with the fool as the trump card in tarot. Depending on the numbers, this card may be a symbol of either carefreeness or failure. Thus, interpretations become manifold: Does the fool belong to everybody, or is everybody a fool? Most likely, one might suspect, foolishness is inherent in us all.

Sign up to be among the first to know when new exhibitions by Elif Saydam or at Galerie Rüdiger Schöttle open.