Dennis Oppenheim was born in 1938 in Electric City, Washington, he died in 2011 in New York. He was recently recognised for Lifetime Achievement at the 2007 Vancouver Sculpture Biennale, has received international attention for a body of conceptual work that includes performance, sculpture, and photographs. I

n the late sixties he created projects which embrace Earth and Body Art, Video and Performance Art. In a series of works produced between 1970 and 1974, Oppenheim used his own body as a site to challenge the self: he explored the boundaries of personal risk, transformation, and communication. 1981 opened a new chapter, with machine pieces, complex constructions which he used to create a metaphor for the artistic process. By the mid-eighties his sculpture was based on the transformation of everyday objects. Since the mid-ninties his work has become larger in scale and permanent, fusing sculpture and architecture.

He received his B.F.A. from the School of Arts and Crafts, and an M.F.A. from Stanford University. He has received fellowships from the Guggenheim Foundation and the National Endowment for the Arts. Dennis Oppenheim has exhibited his works internationally in galleries and museums including the Tate Gallery, London, Stedelijk Museum, Amsterdam, Whitney Museum of American Art and The Museum of Modern Art, New York, Musee d'Art Moderne de la Ville de Paris and the Joseph Helman Gallery, New York.

He has been commissioned by many venues including Ballerup Kommune, Copenhagen; Neue Nationalgalerie, Berlin, The Whitney Museum of American Art, New York, and Olympic Park, South Korea. 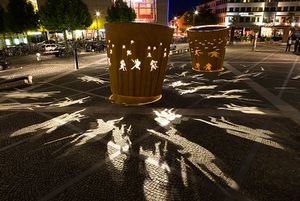 Those who know Art Brussels know that it has built up its own niche of difference in the admittedly pretty homogeneous landscape of art fairs.

Have you ever wanted to walk through a large shirt? Whether or not you’ve entertained the notion, it is now a real possibility at Storm King Art Center. The upstate New York sculpture park is currently home to a super-sized sculpture of a collared men’s shirt and tie, conceived by Dennis Oppenheim. The work serves as an archway to a...

Nature has always been a source of inspiration for artists, and landscape remains a favored subject for many. In the late 1960s, a group of artists, including Robert Smithson, Walter De Maria, Michael Heizer, and Dennis Oppenheim, among others, came up with the revolutionary idea to consider land itself as a medium, inherently laden as it is with...

From his Minimalist earthworks created in remote places in the 1960s to Pop-Surrealist public sculptures for urban settings in the 1990s and 2000s, Dennis Oppenheim was dedicated to the proposition that art should be open to the world rather than cloistered in galleries and museums. So it is appropriate that he should be this year’s featured...