"Spaces: from landscape to still life? The passage from the first definition of a natural space, still concise according to the models of the models of a landscape tradition that is romantic in origin - the disturbed space of feeling, from a panic adhesion to a nature seen not as a portion of an unrepresentable whole, but as a cosmic totality present in every particular, to the conception of a closed space, of a room which seems to be the drawing up of the angles of a memory which, this time, is a completely private and personal ("A Room for the whole journey"). [...]"

Walter Guadagnini, Notes for an Essay on Arcangelo, the primitive and other questions, Segno monografie, Pescara 1997, note 7, p. 34

Arcangelo is a painter who prefers to manage the "too much" rather than the "too little". His work represents more than a painting in the traditional sense, it's a drama, a staging of conflicting evidence. This led him to become interested in the southern part of the world, that's why he puts Africa at the heart of his travels and he probably made ​​this cradle of humanity on center of his pictorial expression. In 2003 and 2007, he published a monograph in two large volumes bringing together all of its production the eighties. He also made many artist books duet with Italian poets. Arcangelo is an artist from the campaign (Benevento), full of strength and seditious ability to "go beyond"; Beyond the themes and conventions of the West, beyond the fixed styles of a figurative self-centered and repetitive culture. 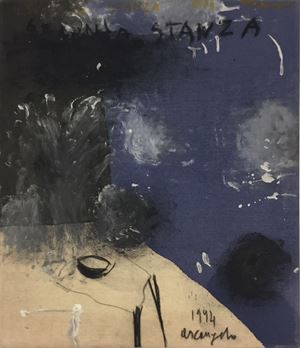