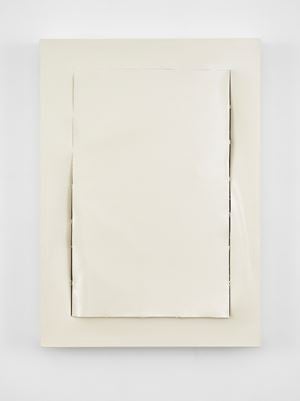 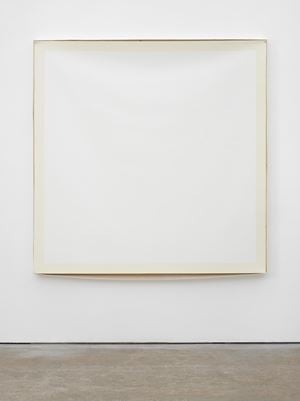 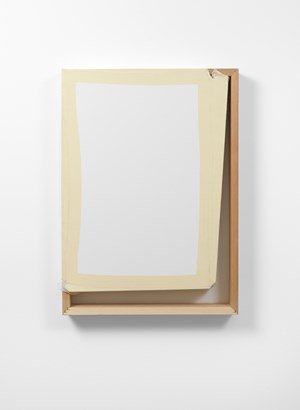 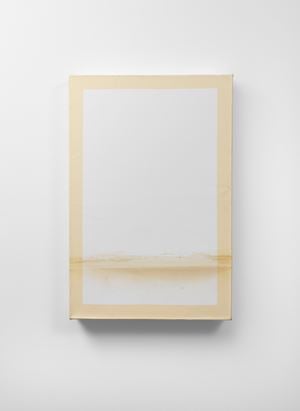 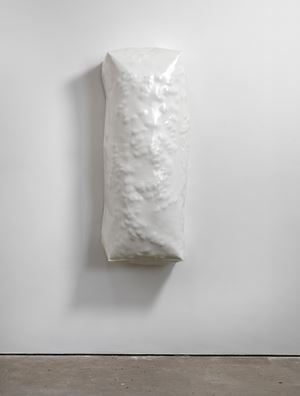 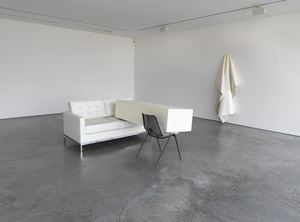 To start the new year, Galerie Thomas Schulte presents the exhibition BLANK by Angela de la Cruz. In her work, the artist challenges the traditional conception and structure of painting. In the gallery's two outer rooms, visible from the street, de la Cruz stages a selection of nearly monochromatic white-toned objects and wall-based works. With her display of white and offwhite shapes and surfaces, the artist suggests a fresh start to 2021: visitors may regard the purist works as a means of purification and as a starting point for further associations—'Art is very important and more important than ever to give people a sense of perspective. It is really very important. It can also be a relief from the world.'

At the centre of the gallery's nine-meter-high Corner Space is the work Transfer (Ivory), a sofa burdened by a white pedestal. The object is supplemented by a chair that supports the other end of the minimalist, yet bulky, object. The monolith, balanced between the two pieces of furniture, is hand painted in an ivory shade of white, as are the accompanying works on the walls. This creates a somewhat familiar domestic, yet comfortless setting that reinforces the distinction between inside and outside. A clear separation of public urban life—loud and colourful—and a cool modernist ensemble that seems quiet and still, like a living room bathed in different shades of white. The barren atmosphere could be straight out of a scene from Stanley Kubrick's sci-fi films.

Angela de la Cruz's work uses painting and its components as a sculptural object rather than merely a two-dimensional image. She focuses on renegotiating prevailing notions of painting, deconstructing canvas and stretcher for this purpose. De la Cruz thus partly literally detaches the idea of the painted image from its body and its components. In general, the corporeal plays an important role in de la Cruz's work as her objects, which also include found elements, frequently take on anthropomorphic features or stances. The fact that the human figure is always the point of reference in de la Cruz's work becomes palpable when the pieces of furniture, canvases, and aluminium boxes seem to crouch, slouch, lay on the floor, or just sit on a sofa.

Sign up to be among the first to know when new exhibitions by Angela De La Cruz or at Galerie Thomas Schulte open.
Sign Up
}