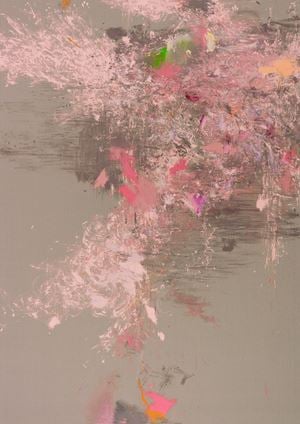 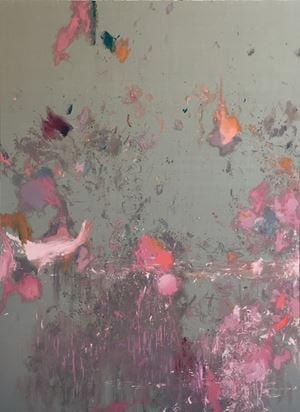 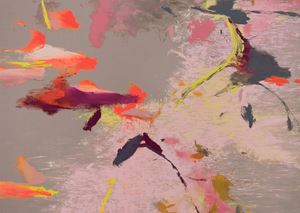 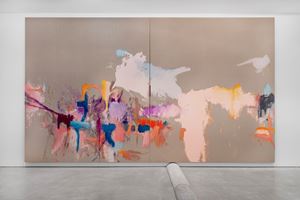 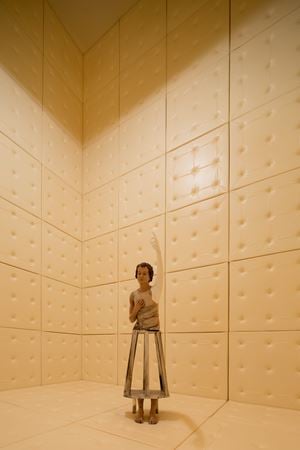 Galerie Thomas Schulte is pleased to present two new exhibitions by Michael Müller, Anton im Bastrock and Bikini on Mars, both opening as part of Gallery Weekend Berlin this September 2020. It will be the first solo show by the artist at the gallery since his extensive cycle of '18 Exhibitions' (2013 to 2017). The new exhibitions will furthermore be the first with a focus on Müller's oeuvre of painted work. Until now, the artist has been known primarily for his conceptually complex, multilayered installations and performances, and as a curator. As part of his shows at the gallery, Müller will present a number of new series of programmatic painting: Before and behind the glass, Handicap, Difficult Paintings, Abstract Autogamy and Power of Judgement. Through these works, Müller examines painting's classical approaches, methods and techniques, as well as its formats, materials, presentation and reception. In so doing, he questions our learned expectations of painting. The groups of works each explore different aspects of the painterly process.

The gallery's main space features a number of different series of paintings. The centre-piece of which is the painting-installation Power of Judgement. A single painting is presented in the centre of the room, attached with a flexible joint to a free-standing metal pole. The visitor is invited to change and manipulate the orientation of the painting by moving it around. For this purpose, the frame of the painting has been equipped with handles. The viewer is thus enabled to break with otherwise deterministic and standardised formats of exhibiting and viewing painted works.

'Before and behind the glass' is the title of the first series of abstract paintings, presented by Müller in the main exhibition space. Using a range of materials, from glass, canvas and metal as surfaces to paint on, the artist explores possibilities of shaping the relationship between an image's projected spatial effects and its nature as a painting and three-dimensional object. By painting on glass, which usually separates the painting from its surroundings, we as viewers see the paint from behind through the transparent surface. The composition of the final work, which in some cases consists of several layers of paint on transparent and non-transparent surfaces, requires Müller to paint in reverse: The mental blueprint of the work's final composition is painted backwards to forwards. Moreover, the paint seen from behind the glass appears as a smooth, saturated surface. The brushstroke, the physical trace of the artist's hand—traditionally central to the painterly process—remains hidden; concealed in the small space between the glass and the canvas or wall.

Müller used his fingers to create a further, smaller series of works, Handicap. He also used special tools, to make obstruct and impede the painting process, such as windshield wipers, a mop, a scalpel, rollers or an encrusted, dry brush. The artist thus deconstructs the myth of the artist's ingenious hand—a myth dating back to the Neolithic period; to the imprint of the human hand found by archaeologists in early cave paintings.

The series 'Difficult Paintings' is a group of diptychs, each consisting of a larger picture in landscape format and a smaller picture in portrait format. Both parts of the diptych are hung side by side, though at different angles. In this way, the relationship between the two parts becomes both complex and unequal. In all cases, the smaller picture comes second to the larger, original work, thus acting as a form of commentary within the broader composition. Each painting in the pair took varying time to complete and were painted using different methods. This marked temporal dimension plays a decisive role in further complicating the relationship between the larger and smaller parts. For, although the larger picture came first, the second picture reproduces an earlier state of the first that has been painted over in the final version. Thus, Müller uses the means of reproduction to document and visualise a decision made during the painting process.

The series, 'Abstract Autogamy' combines photography and painting; blending together themes of figuration and abstraction. In this series, photographs are printed on aluminium dibond sheets and framed behind an abstract glass painting. Though both parts of the diptych are based on the same image, they appear in a mirrored, enlarged or otherwise abstracted form, thus making their relationship at once tangible yet complex. Aside from their shared colour palette and image reference, the painting and photograph behind it are conceived of as compositionally independent. The term autogamy, in the series' title, is borrowed from the field of biology, where it describes the phenomenon of self-pollination or self-fertilisation among certain plant and animal species. Müller's 'autogamies' show men and women masturbating. Müller sees the eradication of the dialectical separation between subject and object in auto-sexuality as analogous to abstraction—to painting an object that only refers to itself. Like in auto-sexuality a partner or object is often imagined—projected—from memory, thus begging the question: What is the pictorial memory of abstraction?

After the first display presented during Gallery Weekend Berlin, a second iteration of the exhibition will be installed halfway through its runtime under the title Aesthetic Judgment and Selflessness. In this second display, all elements of installation will be removed from the exhibition space and the paintings will be presented in a classically reduced and concentrated form.

Sign up to be among the first to know when new exhibitions by Michael Müller or at Galerie Thomas Schulte open.