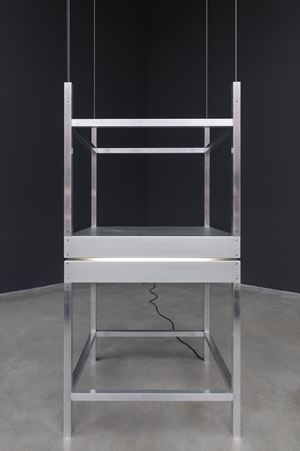 This fall, Galerie Thomas Schulte presents the installation Lament of the Images by Alfredo Jaar. The artist had originally developed the work for the Stommeln Synagogue Art Project, where it was shown during 2019. Now installed in the gallery's Corner Space, the work takes on a different context and meaning, in order to shed light on the buildings' forgotten history.

Lament of the Images by Alfredo Jaar is an installation that consists of two illuminated light tables; one is placed in the centre of the space, the other—mirroring the first—is suspended upside down from the nine-meter-high ceiling, directly on top of the other. The two table tops emanate a very bright, white light. The motorised, upper table is being lowered and pulled up again repeatedly and at a regular pace so that at times, when the two tables are 1 cm apart, the space falls into darkness. When the table is pulled up again, the light illuminates the otherwise empty space.
Jaar himself has described Lament of the Images as a metaphor for the blindness of a contemporary society bombarded with images, stating that he believes that we have lost the ability to see and be moved by images.
The absence of images is a call to the return of the real, the light illuminating members of the audience and inviting them to see each other.
Self-aware of his position as an artist and himself a producer of images, Jaar's position is one of criticality towards the inefficacy of images—their inability to ever fully encompass or represent the meaning of an event. In his installations, the artist therefore often relies on the medium of light: light as a central element in photography, as a philosophical category, and as a poetic metaphor; light as enlightenment, and void.

Historical Notes: The Art Project Stommeln Synagogue, where the work was first shown, was initiated in 1991, in order to raise public awareness of this historical site, by inviting artists to produce and show works that propose a close interrelationship with the space and its history. The synagogue in Stommeln is one of only a few that were not damaged during the pogroms of 1938.
Now installed in the Corner Space of Galerie Thomas Schulte, Lament of the Images has been placed in a different context and sheds light on the history of the building in which the gallery has existed since 2006, the so-called Tuteur House. The name of the building is intended to recall the Jewish businessman Jacob Tuteur, who had the Gründerzeit building converted into a 'house of fashion' by the famous modernist architect Hermann Muthesius in 1913. The clothing-company Kersten & Tuteur was considered the first address for women's fashion in Berlin until the 1930s.
After the pogrom night in 1938, the store was looted and consequently 'aryanised.' Abandoned by his wife because of his Jewish descent and to escape deportation, Tuteur took his own life in 1939. As one of four buildings on Leipziger Strasse that remained intact during WWII, it was used during the GDR as the embassy of Czechoslovakia and later as the embassy of Slovakia. After Germany's reunification, the Tuteur family successfully claimed their property rights in court and the building was restituted in the late 1990s.

Lament Of The Images

Sign up to be among the first to know when new exhibitions by Alfredo Jaar or at Galerie Thomas Schulte open.
Sign Up