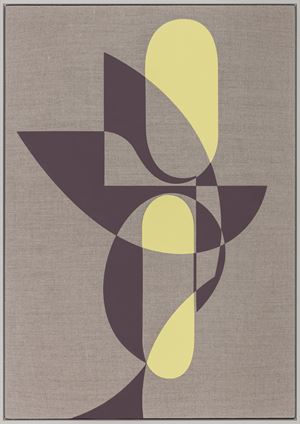 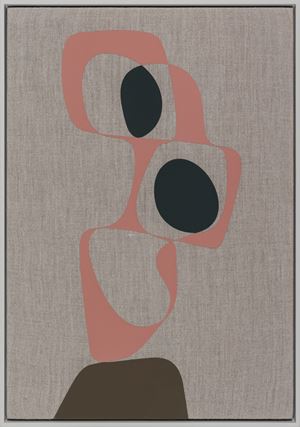 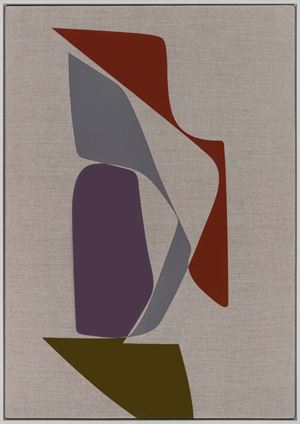 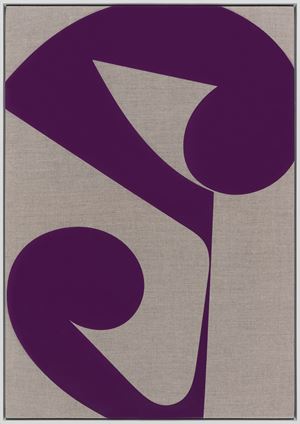 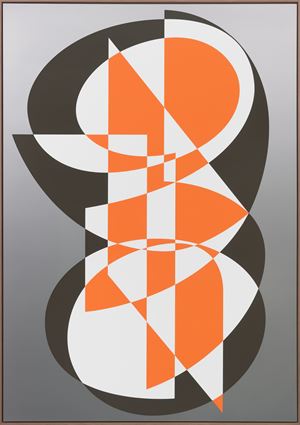 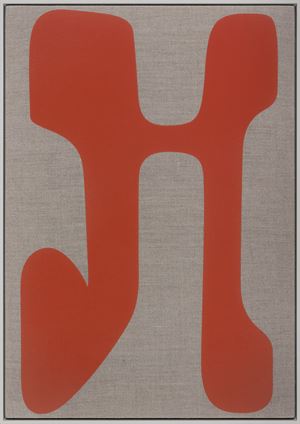 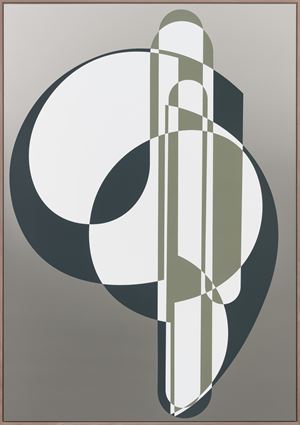 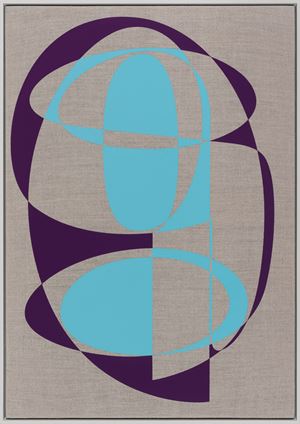 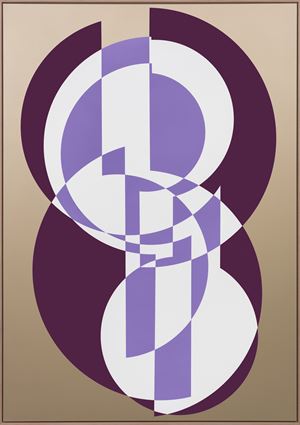 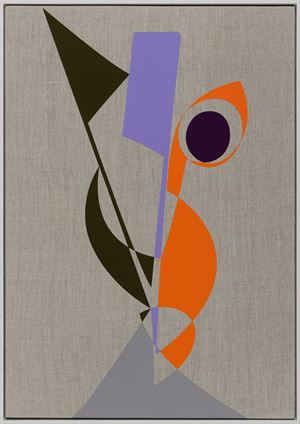 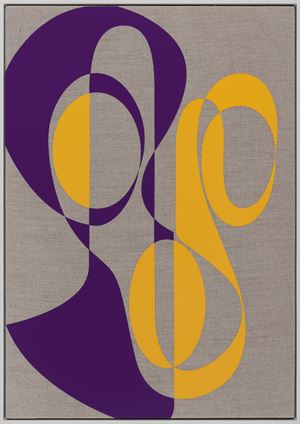 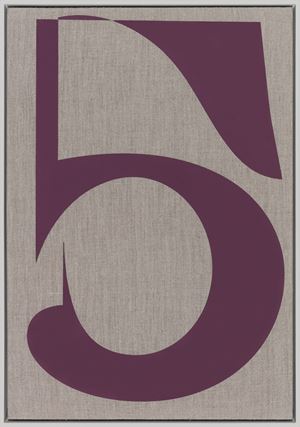 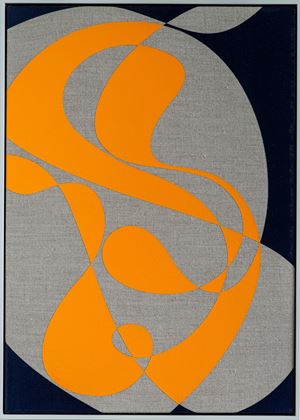 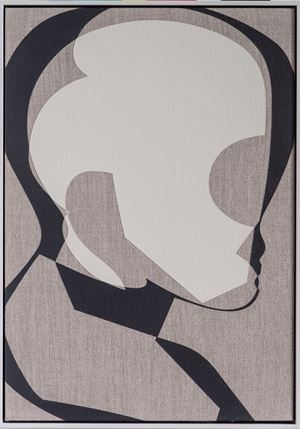 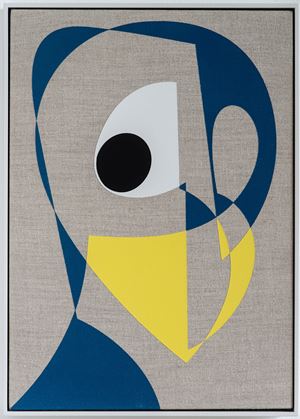 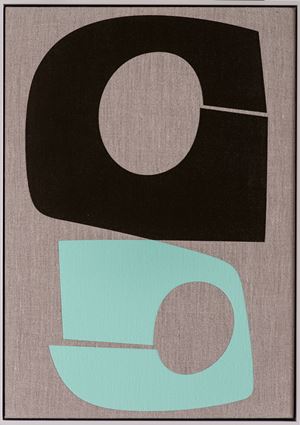 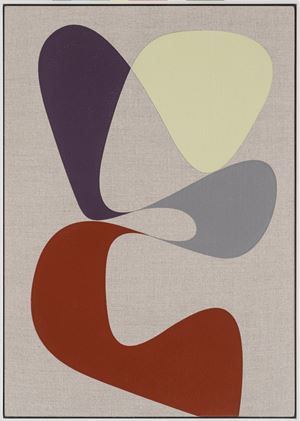 Albrecht Schnider's sixthh solo exhibition with Galerie Thomas Schulte presents large-scale sprayed acrylic lacquer paintings alongside a selection of new works on raw canvas—contrasting textured and smooth surfaces and materialising shifts in the figure-ground relationship. In the interplay between images, what comes to the fore is the scope of constructive possibilities in Schnider's work, emerging in parallel to the constancy of his distinctive visual language. Through processes of both intuition and analysis, Schnider constructs constellations of colour fields that materialise images in a state of continual becoming. Forms and planes hover before our eyes, before the surface of the canvas, occupying a space entirely their own.

Despite the clearly articulated edges of planes and the purposefulness of lines, to say Schnider produces his paintings with precision may be a strong understatement—if not entirely reductive. As the artist himself explains: 'It's not about realising a thought or realising a precise form you carry within yourself... It's really just about being open-minded, being willing to say 'yes' when a form emerges.'1 Schnider's creative process typically begins with drawing—finding forms—which then come to expression in his paintings: 'repetition and chance are the two magic words.'2

The forms that emerge in Schnider's images are in constant tension—between their own agency and the specificity with which they've manifested. Though they are decisively generated, firmly fixed within their own boundaries, they are nonetheless prone to shifts, transformation. Cut-out patterns alternate between positive and negative space; and even in their hard-edged abstraction, the forms take on an organic quality, forming calligraphic loops that flow from one movement to the next.

Faces in profile emerge alongside figures that we recognise as symbols—numbers, letters—and give way to more elaborate pairings of colour and form that manifest as elements of a pattern. The empty spaces leave openings for the observer to fill in; though at times, clear references also emerge. Globi I—the only work that is titled—is particularly playful, portraying an abstract depiction of the Swiss cartoon character of the same name. The blue parrot's head turns slightly as he glances at us through one large eye stacked above a yellow beak. The eye in this image is especially conspicuous, anchoring the constellation of forms and making it recognisable as a face.

We might perhaps think of Schnider's words here: 'I constantly look at the picture. I'm searching for the moment when the picture looks at me... a moment when the picture returns my gaze.'3 Though for Schnider, this gaze doesn't necessarily come from an eye, as the planes and lines of his images don't necessarily refer to anything specific or tangible—often, they are more like suggestions, an allusion to portraiture rather than a portrait of someone. And even in Globi I, a work with a clear representational reference, the interconnecting forms and fields of colour are also readable as just that—independent from the readable image they create, they are part of a system of curvatures, an interplay of positive and negative spaces. The forms and movements that compose Globi's face are also reiterated elsewhere, manifesting other images entirely—images that don't drift so easily from abstraction.

Another striking, almost eye-like, image is composed of a contained, irregularly shaped group of forms at the centre of the black-painted canvas, reaching nearly to its edges. Thick bars of bright green and white are stacked atop each other, separated by thin black bars. Leaning at an angle within this green and white composite, is another capsule-like black form. The contrast of colours, the blunt, chunky forms, and the black backdrop instigate a perpetual uncertainty about which forms are closed and which are open; where the ground ends and the figure begins.

Elsewhere, forms allude to depictions of abstract sculptures—perhaps reflecting the influence of modernist art traditions on Schnider's practice. Centrally positioned, geometric, irregularly composed forms seem to sit atop pedestals that stand firmly at the canvas's bottom edge. Similarly, in another image, a face in profile is constructed like a skeletal portrait bust.

Alongside the new works on raw canvas, three images on metallic backgrounds dissolve associations with objects, becoming pattern-like—emphatically two-dimensional. Once again, frame-filling forms float in the centre of the canvases. They are mostly rounded, bulbous—with either black or deep purple around their outermost edges, filled with alternating white and different colour sections on the inside. There seems to be more going on in them—more interplays, contrasts and warpings.

In these sprayed lacquer paintings, the image reaches another level of anonymity, through smooth, seamless surfaces. In juxtaposition with the works on raw canvas, they introduce another contrast: the shift from smooth metallic background to raw, organic canvas. In the process, the materiality—and the constructedness—of both becomes more clearly articulated. The image is present, beyond what is immediately visible or recognisable, even when it eludes us.

Sign up to be among the first to know when new exhibitions by Albrecht Schnider or at Galerie Thomas Schulte open.