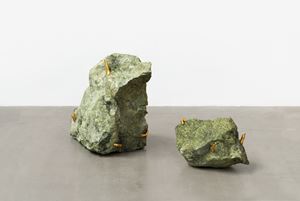 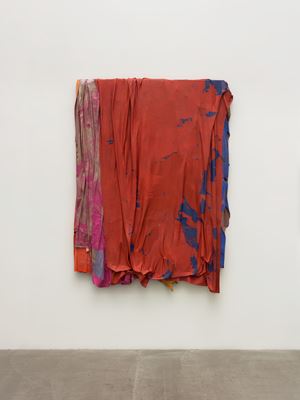 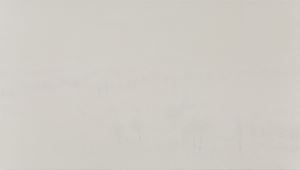 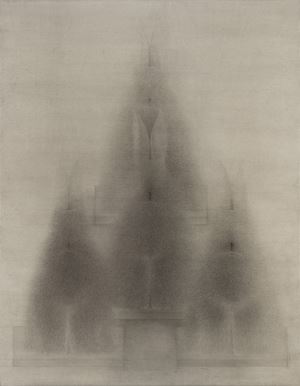 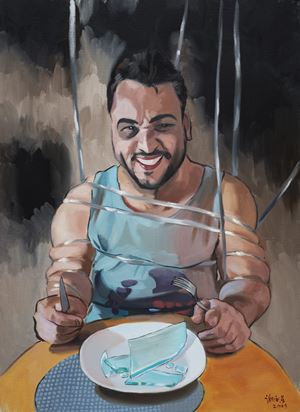 Ju Ting's (*1983 in Shandong, China) practice can hardly be simplified as abstract painting, although she has clearly excluded representational content from her work. In both of her on-going series, 'Untitled' and 'Pearl', the artist applies numerous layers of acrylic paint on top of each other onto a wooden panel, until obtaining a certain thickness. She then manipulates and models the stacked layers of colour by hand or using tools. In the end the cut, folded, peeled or torn layers of colour present a certain plasticity, as if form is organically generated from within the image. Ju Ting will be showing recent works from both series at our booth.

Shao Fan's (*1964 in Beijing, China) unique artistic language has earned him international recognition. He is best known for converting Chinese traditional themes in his ink and oil paintings into a highly personal style that earned him a distinctive position in the Chinese contemporary art scene. Shao Fan's first European retrospective, YOU, was shown at the Ludwig Museum (Koblenz, Germany) in 2018, providing a comprehensive overview of over 30 years of his artistic practice. The exhibition then traveled to the Suzhou Museum (Jiangsu, China). In 2020, Shao Fan's work will be presented in two major museum shows in Holland and Italy. A recent ink painting entitled Rabbit Array (2018, ink on rice paper, 225 x 175 cm) will be featured at our booth.

The methodology behind Zhang Xuerui's (*1979 in Shanxi, China) abstract paintings appears quickly at first glance, namely the use of an orderly grid, of which each unit is filled with gradually shifting colours. Beyond these apparent simple elements–colours and grids–lies the artist's inner understanding of the notion of space. Time also plays a crucial role in the construction of Xuerui's paintings, as the subtle gradients she generates must be completed at once in very intense moments of concentration. We will feature Zhang Xuerui's latest work 225 201905 (2019, acrylic on canvas, 150 x 150 cm) for this year's Art021.

In conjunction with the fair, we will launch the solo exhibition Horn of Plenty by Tobias Kaspar (*1984 in Basel, Switzerland) at our 798 gallery in Beijing. For his first solo exhibition in China, the artist photographed a series of embroideries made from the 1960s to the 1990s by a Swiss textile company known for producing haute couture fabrics. These fabrics were specially made for the Asian market and were very popular at the time. The photographs show beautiful embroidered patterns such as women wearing ballet costumes or the famous YSL Mondrian dresses, street scenes of London or Paris, and the British polo tournament, all symbols of the Western lifestyle that Asian customers long for. The use of photography, a medium that intrinsically imposes a form of distance, highlights the brightness of the colours and the simplicity of the patterns. The captured images are then 're-exported' to Asia in the name of art. We will present Kaspar's The Bike Ride (2019, 1/2, ultra giclee, mounting on acrylic board, white wooden frame, 200 x 160 cm (photo); 205 x 165 x 5 cm (framed), edition of 2 + 1AP) among other new photographs at our Art021 booth.

Not Vital's (*1948 in Sent, Switzerland) complex oeuvre spans across a wide variety of media and material-including marble, gold, stainless steel, plaster and wood–and is largely based on biographical experiences and cultural awareness. His work is informed by, on one hand, a childhood spent in the mountainous and isolated Engadin Valley, and, on the other hand, the nomadic existence Vital has adopted since his late teens–leading him to the peripheries of the world. This inexhaustible appetite for travel has contributed much to his work in all senses, from the materials he chose to the topics he covered, and the people he collaborated with. We will present the work Adam One Afternoon (2011, 2/2, Stainless steel, 352 x 295 x 140 cm, edition of 2), a sculpture of a series made of stainless steel, whose title is a homage to Italo Calvino's eponymous book.

Rebekka Steiger (*1993, lives and works in Beijng) engages herself intensively in painting. For her large-scale and colourful paintings, she takes inspiration from old books and photographs. She condenses her subjects into paintings of ambivalent mood and great expressiveness in her dynamic style. The repeated application of layers of colour in a process embracing serendipity characterises her artistic approach, always readily confronting the unknown and the unexpected. Her abundant knowledge is then put into practice in a subtle and playful manner. While superimposing layer upon layer of colour, Steiger's paintings become abstract and culminate in works of great ambivalence and enormous intensity. Her works appeal to us for their intensive colourfulness deriving from the young artist's strong interest in emotionality and atmospheric painting.

Tobias Rehberger (*1966, Esslingen, Germany) lives and works in Frankfurt am Main. With numerous museum and gallery exhibitions worldwide, he is known internationally as an important figure in the field of conceptual art. His sculptures are at the crossroads between architecture, design, fashion, advertising and sociology, conferring a contemporary dimension to the modernist project of creating both functional and beautiful objects. 'Infections' is an ongoing series of Velcro tape lamps that started in 2002 and continues to this day. Rehberger exhibits them both individually and in groups. Each 'Infection' is first composed by other people, such as Rehberger's students or assistants; Rehberger then intervenes in the works, adjusting, tweaking, moving, but the rule is that he is not allowed to add any material: he has to use what is given to him. A series of 'Infections' Lamps among other new works from various series were on view this spring in Rehberger's first institutional show in China at the Rockbund Art Museum in Shanghai. We will present a selection of 'Infections' lamps at our Art021 booth.