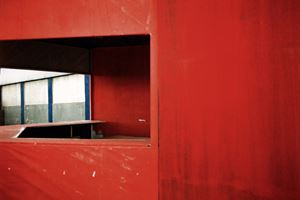 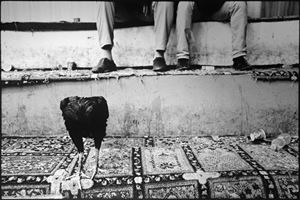 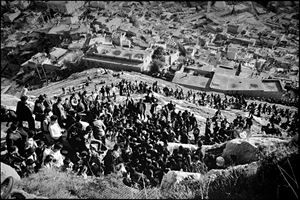 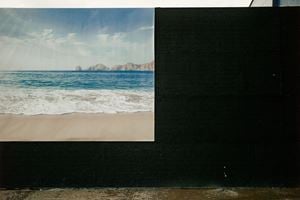 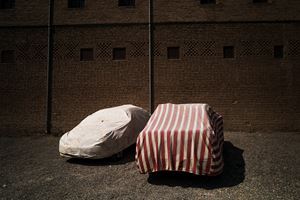 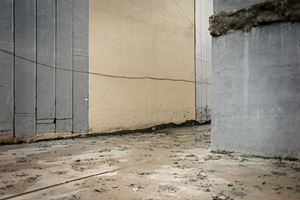 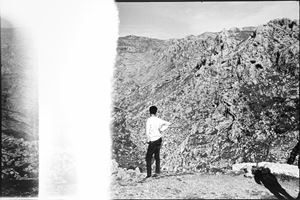 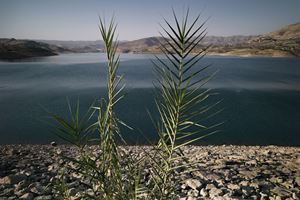 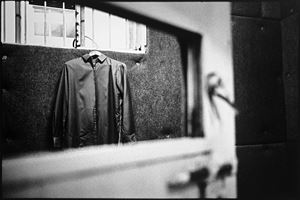 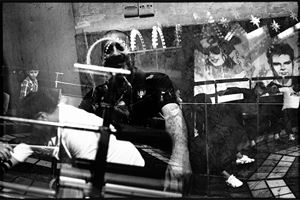 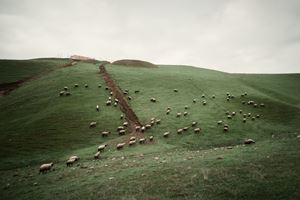 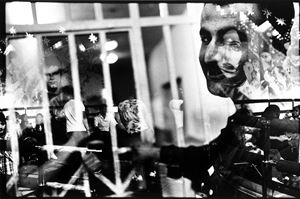 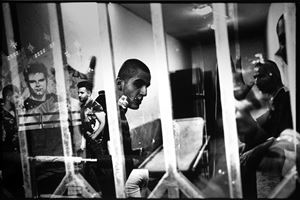 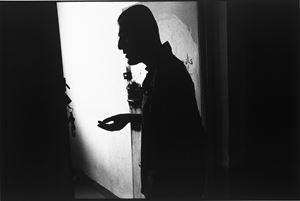 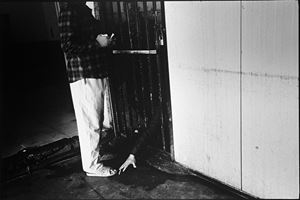 Kurdistan was, in the past years, often the centre of photojournalistic reporting. An autonomous region spanning across the north of Iraq, Syria, Turkey and Iran, it was subjected to violence from Islamic radical groups (most recently) since 2014. But where many photographers turned their lens towards the conflict itself, Simon Chang seemed to be more interested in the less obvious wounds of the nation, ones concealed even inside it. Between two visits to north Iraq – one in 2018 and one in 2019, he became interested in two places existing as part of everyday life yet removed or rejected from the eye of the public. The first was Hawler, a psychiatric hospital in Erbil, the second The Duhok Municipal Slaughterhouse in the mountains of Simele.

Part of the unusual setting of Chang's series is the Hawler psychiatric hospital for male patients. These are men scarred by war against the Islam state, who bear the consequences most onlookers chose to ignore, or forget. For these men, the war is not over. It lives inside of them like cancer and festers in the people, making them outcasts even in their own society. The circumstance of the patients is not unusual, but it is rarely put into focus. Chang documented their lives between 2018 and 2019, but in a way began the project back in 2004, when he photographed the psychiatric hospital Bohnice in Prague. His interest lay in the way in which society is able to remove an irritating element from view and pretend it no longer exists. Out of sight and out of mind seems to be the modus operandi towards the mentally disabled, whether in Europe or the Middle East. The second half of the series traces the daily activities of a slaughterhouse in a small village north of Erbil. Chang's own account of The Duhok Slaughterhouse is as chilling as that of the psych ward, with rivers of blood running everywhere like rising tides. It abides by the many rules of halal, disposing of the animals in a precisely determined way deemed most humane by the Koran. But to the photographer, the two places tell a larger story, one of a country in turmoil. The patients of Hawler are victims of a political injustice, even genocide survivors now trapped in solitary cells, while the cattle awaiting death in a slaughterhouse are their ironic animal equal. In a way, as the photographer remarks in one of his texts, animals in slaughterhouses are treated more humanely than the prisoners of Hawler. Their struggles end swiftly – the patients' carry on for years.

It is important to ask ourselves, what is the role of this type of photography? To induce sympathy, outrage, even wonder in the viewer? Since the development of the medium itself, photography documented the rampage of war and brought its disturbing visuals to viewers around the globe. [1] Due to photojournalism, the faraway suffering was no longer invisible and thus became increasingly difficult to ignore. 'The photographs [of war] are a means of making "real" (or more "real") matters that the privileged and the merely safe might prefer to ignore', says Susan Sontag in her influential work Regarding the Pain of Others. [2] As Sontag also elaborates, the frequent issue of these types of photographs is the creation of a misconception that these horrors or injustices are happening there, not here, that they are inherent to remote, backward, poor places. Chang's goal was to show the opposite, not an 'otherness' but rather an absolute likeness to our own society. The series does not produce a sense of awe or wonder, so frequent when photographers document the East for publications in the West, but focuses rather on the human experience and its subjectivity. His subjects are never 'nameless', each one has a story and a background which makes the viewer feel as if these are people he met with personally.

In that sense, his previous series Fleeing from the Dark Side of the Moon, which documented refugees on the Slovenian border between 2015 and 2016, functions as a prelude to Shepherds and the Slaughterhouse. Chang has long been preoccupied with the issues of migration and a sense of belonging, relating to the migrant experience himself. Originally from Taiwan, he moved first to the Czech Republic and then Slovenia, where he is now raising a family. He felt a deeply rooted urge to understand the crowds of Kurdish migrants he observed when documenting the situation on Slovenia's borders. He decided then that he needed to experience their culture first-hand, to visit the homeland of those Kurds who were singing in the massive refugee crowd regardless of hours of waiting, not to mention the zero-degree temperature in the open field between the borders.

And there is another, brighter side to the narrative of Shepherds and the Slaughterhouse as well. Chang spent time in the region, engaged in religious customs, observed the fast-paced rituals of the shepherd markets. He photographed a frenzied collage of picturesque weddings, kitschy posters promising beach-front vacations, pigeon markets and dhikr rituals, cock fights, market sellers, lively conversations. A nation proud and resilient, a people holding hands as they are celebrating Nowruz, the Kurdish New Year. The crowds, dancing to loud music, in some way mimic the frenzied experience of the place. There is a contradiction instilled in the name of Chang's series – what is the land of shepherds, peaceful, friendly and welcoming, is also the land of turmoil and recent devastation. Chang, aware of the rising fear Europeans feel towards migrants, being fed fake or exaggerated news on a daily basis, was surprised at how different the Kurdish reception of himself was – a nation welcoming and warm to visitors.

'Those who were seen dancing were thought to be insane by those who could not hear the music,' supposedly wrote Friedrich Nietzsche. Unbothered by what we do not understand, we are quick to proclaim it as insanity, or strangeness at the least. But for Simon Chang, there is no objective reality of the people he set out to photograph – only the deeply personal desire to understand. He explored both the darker and lighter sides of his photographic subjects wherever he travelled. He focused on the personal stories, intimate details and private trauma. 'Despite people's different ethnicities, religions, or colors of skin, deep inside we still have so much in common, something universal and something humane,' said Chang in one our conversations. As in all his projects, he managed once again to tell an elusive story, one full of contradiction, but full of hope and song as well.

[1] The question of regarding such images has been present since at least the 19th century but more prominently with the Second World War.

Shepherds and the Slaughterhouse 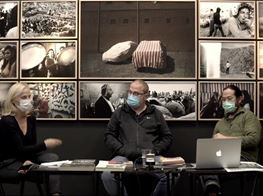 The first of the accompanying events to the exhibition Shepherds and Slaughterhouse will be a conversation between two photographers, Simon Chang, the author of the current exhibition in the gallery and the renowned Slovenian photojournalist Jože Suhadolnik.

Sign up to be among the first to know when new exhibitions by Simon Chang or at Galerija Fotografija open.
Sign Up