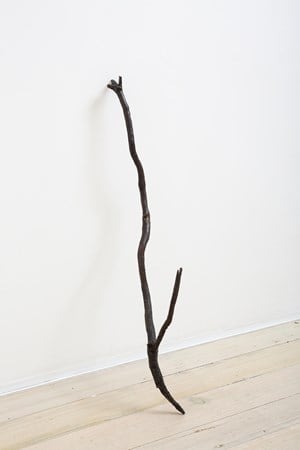 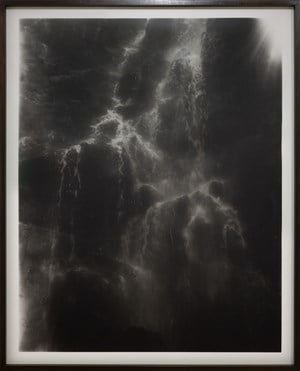 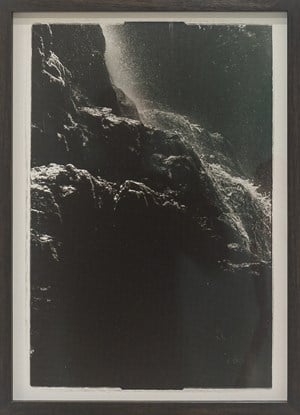 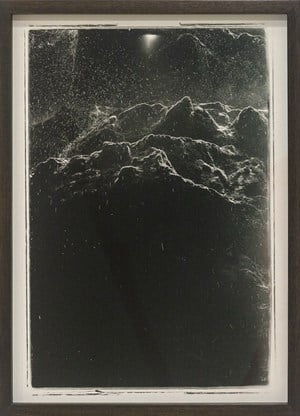 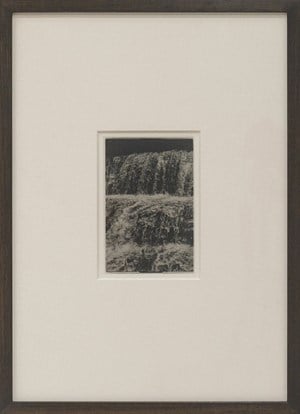 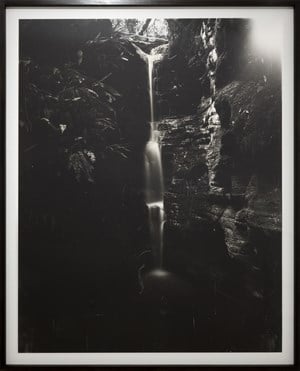 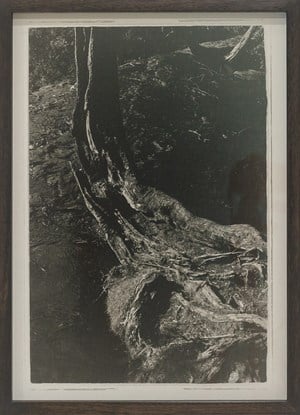 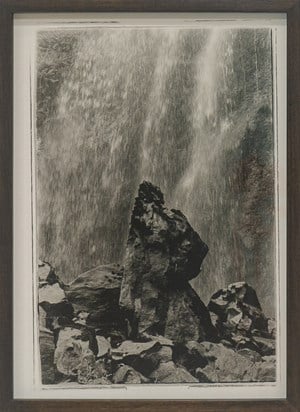 Anthony Hodgkinson's debut at Gallery 9 tells the anecdote of his venture to shoot pictures of hidden waterfalls in Tasmania—and not to find what he attempted. A winded bronze cast stick acts as the centrepiece of the exhibition that balances a suite of dark black and white photographs. Hodgkinson calls it the "Lovers Spear" that left him heart broken after his failed endeavour that led him deep into the bush. He aimed for a legendary waterfall, where as far as the lore goes, a loving couple of prospectors build their cabin. They named the place "The Lovers Falls" and abandoned it soon after. With their disappearance the energy and beauty of the waterfalls seemed to be the only witness of their love. When Hodgkinson reached the place, after traveling for three days, the falls were only trickling. He wasn't able to shoot what he intended, but found an unexpected artefact instead. He saw a stick sitting in the damp pool like a figure in the landscape that mimicked the flow of the waterfall.

It substituted what he thought was a lost picture. For him, the stick signified the lover's spear, which stands for his imperturbable trust in photography as a means to capture unique and irretrievable moments in time. Now the original stick is lost, but its effigy remains as a fossil like bronze cast witness.

Hodgkinson sees the "Lovers Spear" as a tridimensional photograph, as a manifestation of his intention to record memories that retain their tangibility. This attempt is mirrored in the shots, which accompany the work in the show. They are depictions of waterfalls he finally found, and show the blurry and scratched recordings of the flowing water. Hodgkinson prefers the analogue process of black and white photography, which he considers more immediate and tactile than a digital practice. It enables him to leave a trace of self, such as his fingerprints on the substrates of the negative or the printed picture. With an improvised process he developed the film in the creek below the waterfalls, and used a developer, which was mixed with unfiltered river water. Hodgkinson calls himself a bad craftsman who works intentionally against the rules of the discipline. The usual process to develop a negative involves winding the film on to a spool, placing it inside a canister, mixing it with water and developer and then shaking it evenly. He on the other hand threw the canister into the creek, allowing the rhythm of nature to render the emulsion of the film by stripping away and adding information. This methodology also engraves the emotional condition of the photographer, who always risks losinghis recorded memory. In Hodgkinson's view, it was worth the throw, because the landscape and the photograph blended together in order to recreate his peculiar feeling of the place and time when the moment was captured. This photographs became living experiences that invite viewers to create their own worlds.

Sign up to be among the first to know when new exhibitions by Anthony Hodgkinson or at Gallery 9 open.