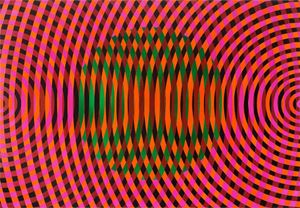 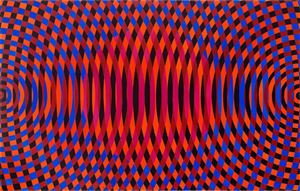 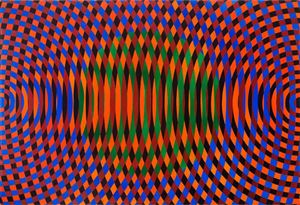 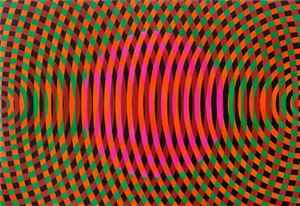 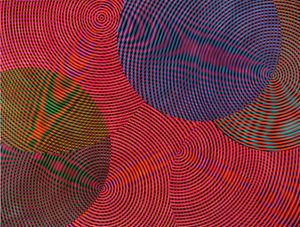 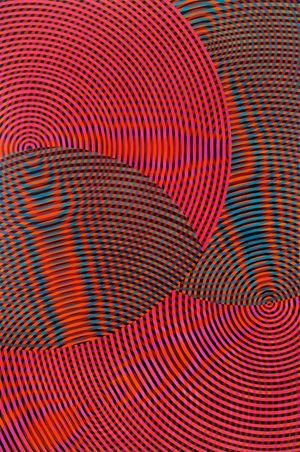 In the early 1990's Aslanidis created his own visual formula which functions in the same way as a mathematical algorithm. He intuitively positions sets of axis points on the canvas and then maps out radial lines from their centre. Where these lines overlap and intersect, Moiré wave patterns are created, giving a striking perceptual shimmer. His choice and sequencing of colours also contribute to the effect of a visual 'pulse'. While closely aligned with music, Aslanidis' also references science. His generative visual formula resembles self-structuring processes in nature, from cell division to exploding stars.

Aslanidis describes his paintings as 'fragments of infinity' in that they suggest an ever expanding field beyond the edge of the canvas.

JOHN ASLANIDIS (b. 1961) has exhibited in Sydney, Melbourne, Berlin and New York for almost three decades. Recent achievements include an 84 sqm wall painting commissioned for Longchamp's Omotesando boutique in Tokyo (2017), a six month residency at the prestigious ISCP International Studio Program in New York (2016), and a survey exhibition at the Australian Consulate-General of New York (2016). In 2016 Aslanidis also exhibited in Berlin, presenting his sixth collaboration with sound artist Brian May. Aslanidis is represented in the collections of Artbank, The University of Sydney Art Collection, New England Regional Art Gallery, Westmead Children's Hospital, Melbourne Arts Centre, Allens Linklaters and numerous private and corporate collections in Australia, Europe and the USA.

Sign up to be among the first to know when new exhibitions by John Aslanidis or at Gallery 9 open.